Yesterday, I had a chance to use economics in a  practical way. My previous fixed rate mortgage deal came to an end. This means the bank would return my mortgage rate to the Standard variable rate, which is currently 4.99% (4.49% points above the base rate). (monthly payments of £703)

When I first bought the house in 2005, my mortgage payments were £950 a month. Interest rates were higher (about 5%), and I had a standard 30 year repayment. I didn’t like paying £950 a month, so extended my repayment term to 47 years. That helped reduce the mortgage cost.

In the past two years, I had a fixed rate mortgage rate of 4.5% (£680 a month) I though this was pretty poor given base rates were so low. It was a practical example of how bank lending rates were divorced from the Bank of England base rate. (bank rates vs base rates)

However, this time, I was eligible for a better rate because I have 60% LTV (home is worth £240,000. Outstanding mortgage debt £130,000.) Also, helped by lower inflation and a slight easing of credit conditions, bank lending rates are lower than 2 years ago. The choices I had were:

I snapped up the 5 year fixed rate. My logic is that the Bank of England base rate is likely to stay at zero for the next one or two years. But, after that, there is a reasonable possibility, we will exit the liquidity trap and Bank of England base rates could return to 5%. If that happens, a tracker mortgage would become very expensive. If base rates rose to 5%, I would be facing a monthly mortgage bill of 8% – £961.

Because of this possibility, I’d rather get a 5 year fixed than 2 year fixed.

It is possible we could replicate Japan’s prolonged decade of stagnation and ultra low interest rates. In this case, a 2 year fixed would be the best, because mortgage deals will still be very cheap in two years time. However, on balance, I think the likelihood of that occurring is receding, and given a five year fixed is not much more expensive than a two year fixed, I’d prefer the security of fixed payments for the next five years.

Maybe I should have taken 10 year fixed whilst I can. In 10 years time, interest rates could conceivable 5-10%. But, I’m quite attracted to 5 years of very low monthly payments, and who knows about next year, let alone six years hence.

Low interest rates will definitely help to increase my spending over the next five years.

There is strong time delay between interest rates and consumer spending. The past two years, I’ve been on a fixed rate of 4.5%. Only now with the credit crunch receding am I am going to be benefiting from low base rates. Because I have a five year fixed rate, future changes in the interest rate won’t really affect my disposable income.

Generally, I like to have lower payments now. I was quite happy to extend my mortgage term, even though it means higher overall payments. One important factor is that I expect inflation to reduce the real cost of mortgage payments over time.

As long as my nominal income increases, it will become easier to pay that £720 fixed rate mortgage back.

Fixed rates are good. I quite like the fact interest payments are fixed for the next five years. It prevents any unpleasant shocks because base rates go up.

I feel lucky to be able to buy a house in 2005 (helped by lax mortgage lending criteria (I got a self-certification mortgage) and a loan from the bank of Mum and Dad). I’m also conscious of the issue of wealth inequality. If I was renting a similar house, it would be  paying £1,000 a month, but this would increase with inflation, with no hope of ever paying off. I also feel lucky to be a homeowner in a time of ultra-low interest rates. I’m glad I’m not a saver trying to eke out an income from negative real interest rates.

Another lucky factor is buying a house in Oxford, where there is a shortage of houses. Because demand is higher than supply, prices have risen substantially since 2005 (despite the crash). I also feel rising house prices are at the expense of people who are trying to buy a house now. There’s no way I could buy a house in the current climate in Oxford. They are so expensive compared to incomes 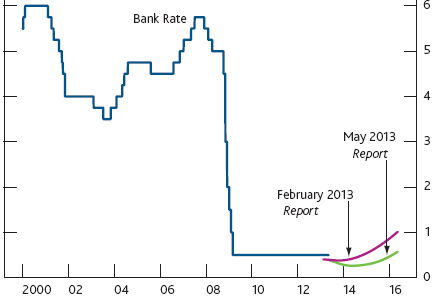