Despite a shrinkage in manufacturing and widening trade deficit, the IMF have hinted that the UK economy is beginning to emerge from one of the longest periods of economic stagnation / recession on records. They marginally increased their forecast for UK growth to 0.9% for 2013. Does the recent good news give hope to the UK?

Firstly, it is worth bearing in mind:

However, there are hopes that the UK economy will finally escape the 5 year long stagnation and return to some form of normal growth. At the least, the UK is in a more optimistic situation than many EU countries.

Why is the UK economy looking more optimistic than many of our European partners?

Austerity lite. On its election in 2010, the UK government embarked on a high profile ‘austerity’ campaign. It promised to slash spending and reduce the deficit. Fears over job losses and spending cuts led to a decline in confidence, and combined with many other factors, slowed down the recovery.

Ironically, for all the noise the government made about austerity, it didn’t do particularly much. (Data on UK austerity) Public investment was cut deeply. But, there was only a relatively small fall in real spending in 2011/12. However, compared to our European partners, like Italy, Portugal, Spain and Greece, UK austerity was quite mild. Still it was a tightening of fiscal policy during a recession when fiscal policy should have been counter-cyclical. But, the damage from spending cuts was relatively minor compared to continent. Countries which embarked on deeper levels of austerity, have unsurprisingly experienced a much deeper recession. 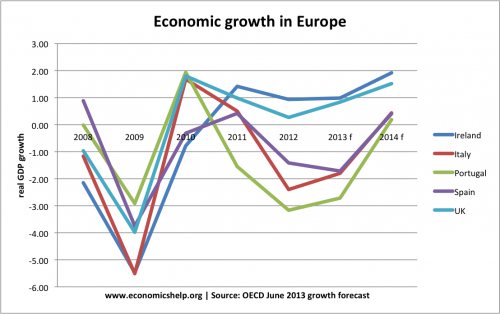 Note: Figures for 2013 and 2014 are forecasts based on OECD June 2013 forecast. I feel that the forecast recovery for Spain and Portugal looks optimistic. (It wouldn’t be the first time the OECD have under-estimated negative effects of austerity on economic growth) 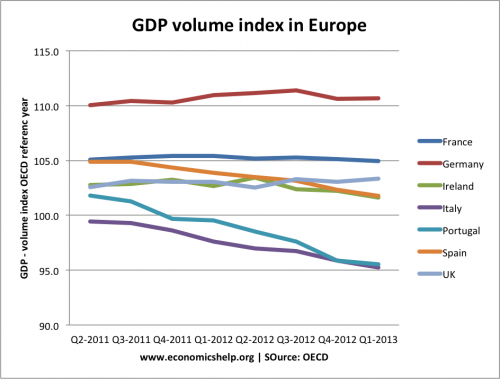 Recently, rather delayed, bank rates have started to fall. Perhaps a result of funding for lending, perhaps partly related to a slow improvement in bank balance sheets. The consequence is lower mortgage and banking costs, which is another reason to have some optimism.

Housing Market. The UK never really had the housing slump other European countries had. (you could argue the UK deserves a housing slump. House price to earnings ratios are still near record levels, but that’s another issue). But, with a shortage of housing, cheap mortgages and very  low mortgage default rates, UK house price falls were relatively modest. Banks have lost little through a housing slump. Unlike Ireland and Spain, UK banks are not sitting on big losses. Recently, UK house prices have also shown signs of renewal. The old favourite of the UK economy is coming back to create a positive wealth effect. It seems a bit bizarre after credit crunch, but the UK housing market is currently doing OK. (UK Housing market) 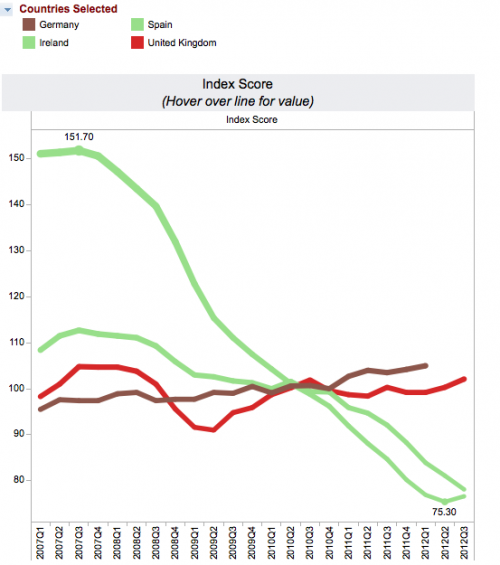 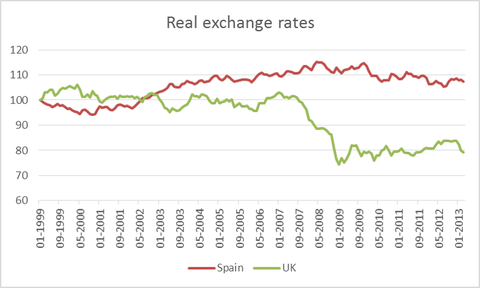 The UK has experienced a 20-25% depreciation in the Pound since the start of the crisis. Admittedly, it has been disappointing in terms of reducing the current account deficit and boosting exports. But, although demand for exports has proved to be inelastic, external demand would have been even weaker without the fall in the value of the Pound. Importantly, if the UK didn’t have a flexible exchange rate, there would have been greater pressure to pursue internal devaluation – basically a period of deflationary pressures to reduce wage costs the hard way.

It would be a surprise if the UK didn’t start to emerge from the balance sheet recession. In fact, it is remarkable that given the UK’s monetary policy, housing market and the depreciation in the exchange rate, the UK hasn’t performed better. The reasons for this weak recovery are several. austerity, weak investment, weak bank lending e.t.c. Increasingly, the recession in Europe looks to be a dragging factor on UK export performance. It is little comfort the UK is doing relatively better than Europe – when a weak Europe will definitely hold back the UK economy.