A look at the future prospects for the Pound in the coming months of 2013.

The Sterling index measures the value of the Pound Sterling against a basket of trade weighted currencies.

This modest appreciation in the Pound has occurred despite:

Therefore the appreciation in the Pound is not so much a reflection of the strength of the UK economy – but a reflection of market nervousness about other currencies. In particulary, given the Euro crisis and difficulties of Eurozone economies, the Pound offers a greater semblance of normality and confidence.

However, given the weak state of the UK economy, it is likely that the fortunes of the Pound could deteriorate in 2013 – especially against the dollar and currencies other than the Euro.

In particular, the growing UK current account deficit (now over 5% of GDP) suggests underlying lack of balance between imports and exports. 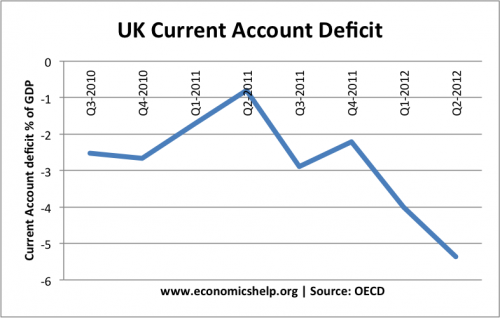 The UK has one of the largest current account deficits in the OECD. There are other reasons to explain the current account deficit, but the widening of the deficit to over 5% of GDP, suggests the Pound is becoming more uncompetitive against its main rivals. In a floating exchange rate, this is likely to lead to some depreciation in the future.

Read moreForecast for Pound Sterling in 2013

One feature of the recent crisis has been the degree to which governments underestimated the forecast rise in government borrowing. The IMF produced a report which looked at forecast debt from 2007, and what debt actually was three years later. In ten selected countries, the increase in the gross debt ratio 31.8

To some extent, this reflects the wider failure to forecast the recession. As well as underestimating debt levels, governments proved widely optimistic on GDP and unemployment. However, the recession wasn’t the only reason for governments to underestimate debt levels. There were also failures to account for liabilities, such as hidden obligations to public corporations and Public private finance initiatives. This shows that many countries need to improve their fiscal transparency.

Why Forecasts were Wrong

There was quite a degree of variability in why debt forecasts were wrong. For example, in the UK there was only a minor underestimation of its fiscal position (3.7% of GDP). Most of the UK’s higher than expected debt were a consequence of the unexpected recession and financial sector intervention.