This shows the price of petrol per litre around the world. Varying in price from $0.02 a litre in Venezuela to Eritrea with a price of $3.33. Generally Western European economies have the highest price of petrol due to higher petrol tax.

Out of 217 countries listed by the world bank.

Most expensive place to buy petrol in the world

The cheapest places to buy petrol

Reasons for variation in the price of petrol around the world 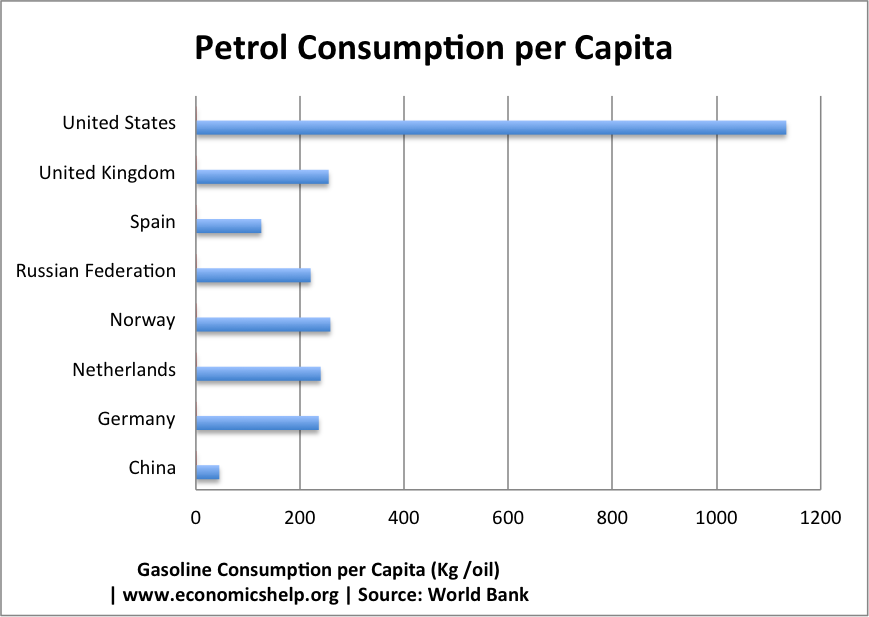 The US has the highest petrol (gasoline) consumption in the world by quite a long way. This is due to

As China experiences economic growth, its per capita consumption is likely to grow rapidly.

Read morePetrol Price Per Litre $ Around the World

In the post-war period, consumption of  vehicle fuel (petrol / diesel) increased dramatically as car ownership rose and more journeys were made by car. However, since 2007, there has been a significant drop in vehicle fuel consumption, with demand falling over 20% 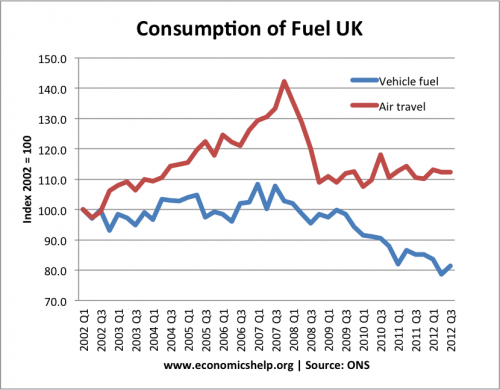 If we ignore all the income effects, social effects and changes in consumer preferences (which admittedly is very significant) we can make a very rough estimate at the price elasticity of demand for vehicle fuel.

Between Q3 2002 and Q3 2012 households consumption of vehicle fuel fell by 18% per head. During this period the annual per litre price of petrol increased 85% and diesel  88%.  Department of Energy and Climate Change

It is what we would expect – demand for vehicle fuel is price inelastic, but higher prices do reduce demand somewhat.

Due to rising costs of fuel, households are still spending more on fuel. In 2002, we spent £89 per head on fuel. In 2012, this had increased to £129. Given the rise in the fuel burden, it is not surprising people have sought to reduce consumption. (see: fuel poverty)

The graph shows that air fuel is much more sensitive to income effects. During the start of the recession from 2007 to 2009, demand for airline fell almost 30% in a short space of time. This indicates that airline fuel is income elastic – sensitive to changes in income. Airline fuel has not really recovered from 2009. The recession will also be having an impact on demand for petrol. The biggest decline for vehicle fuel has occurred during this period. Faced with rising prices and squeezed real wages, people have been cutting back on vehicle fuel. When the economy recovers, we can expect a renewed increase in demand for vehicle fuel.