Readers Question: Can you please explain how speculators can gain a profit from a speculative attack on currencies?

A speculative attack on a currency occurs when ‘investors’ believe that the value of a currency is over-valued and therefore, they sell that currency in anticipation of it falling and buy another currency (e.g. sell their holdings of Pound Sterling and buy Euros). They make money by seeing the value of the currency they buy (e.g. Euros) increase.

Also, to maximise profits, investors can engage in ‘short selling’. This is when an investor sells assets (Currency) that he doesn’t own, and agrees to repurchase them at a future date. If the currency falls in value, then they make a profit, because they sold currency at a high price, but can repurchase at a lower price. George Soros is said to have made £1 billion profit through short selling the Pound Sterling, just before the devaluation of 1992.

Speculation in a Semi-Fixed Exchange Rate

Speculation is most likely to occur in a semi-fixed exchange rate, where a government is committed to keeping the value of a currency at a particular level.

If the UK economic situation deteriorated, then the value of the Pound would likely fall in a floating exchange rate. The bad economic news would encourage investors to sell Pounds and buy Euros.

If the government were committed to keeping the value of the £ at €1.50 Euros, they might have to use their foreign exchange reserves to buy Pounds on the exchange markets, and/or increase interest rates to make it more attractive to save money in the UK.

However, speculators may feel that a government is unable to keep the value of the Pound at that level in the long term. Speculators may think that given the economic situation:

But, while the government is committed to keeping the value of the Pound at €1.50, speculators will be happy to sell Pounds to the government and buy Euros.

If the government then realises that it’s effort to keep the Pound at €1.5 is unrealistic, they will have to accept a devaluation. The value of the Pound will fall. This means that the speculators who bought Euros will see an increase in their wealth.

In 1990, the UK joined the ERM, which was a semi-fixed exchange rate. But, in 1991, the UK entered a deep recession, and it appeared Sterling was overvalued. For several months, the government tried to keep the value of the Sterling at its set level by:

However, speculators like George Soros, correctly predicted the UK could not maintain this high level of interest rates and high exchange rate – it was causing too much damage to the economy. Speculators believed the government would eventually have to devalue.

Therefore, speculators sold Pounds, (which the government tried to buy) and bought options based on the prediction the Pound would fall. On 16th September 1992, the government admitted it would have to devalue and leave the ERM. The value of the Pound fell 20% 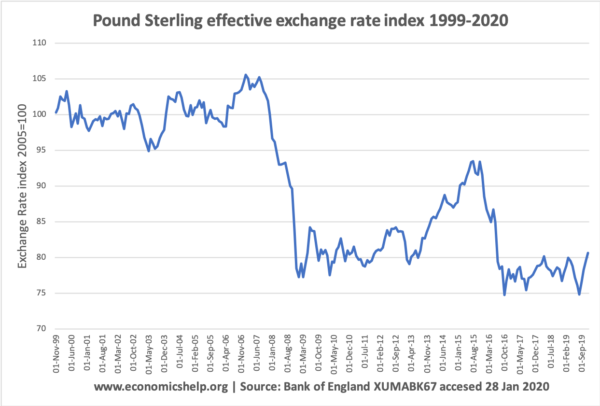