Utility is a concept given to how much satisfaction/happiness a person gains from a particular action.

Utility derived from the philosophy of utilitarianism. An early advocate of Utilitarianism was Jeremy Bentham who argued that utility was the accumulation of pleasure and avoidance of pain.

The concept was refined by others such as J.S. Mill who argued there were higher pleasures, such as a love of literature and culture. Therefore, a decision to forego pleasure now and study could be a rational way to maximise total utility.

We can try to measure utility by using a hypothetical unit of measurement – utils. For example, if you go to a supermarket, you may feel a bag of apples gives you a moderate utility of 20 utils. By comparison, a large pizza may give a greater satisfaction of 50 utils.

It should be noted this measurement of util is very much a normative judgement. In practice, people don’t go around thinking in terms of ‘utils’ but make rough, heuristic judgements about what to buy.

What contributes to utility?

Traditionally utility is related to the satisfaction of material wants or needs.

But utility is not just about the satisfaction of material wants it can also come from a variety of emotions – such as a feeling of altruism. For example, if you give £10 to charity – you lose money, but the action may give you a deep sense of satisfaction.

For example, if we buy a kettle for £50, that gives us acquisitional utility of owning a kettle. However, if we see a kettle on sale for 12 months at £100, but then one day it is reduced in price to £50, we get more happiness because we feel we’ve got a bargain relative to what we expected to pay. This sense of getting a bargain is the transactional utility.

Measuring utility with respect to demand

There are no real ways to measure utility as it is a subjective idea, which will vary from one person to another. However, the demand curve can give a rough idea of likely utility. As Alfred Marshall, in Principles of Economics (1920) writes

“Utility is taken to be correlative to Desire or Want… in those cases with which economics is chiefly concerned the measure is found in the price which a person is willing to pay for the fulfillment or satisfaction of his desire.”

This shows how an individual demand curve may reveal the marginal utility we would place on quantities of a good.

For one unit of the good we may be willing to pay £10 because we feel we get a utility of 10 utils. However, for a second quantity of the good, the utility may be less, so we are only willing to pay £9. Our second unit gives less than the first.

This shows the link between marginal utility and the demand curve.

If a pizza cost £8, you may decide that buying that pizza is worth the money. In other words, the utility gained from eating the pizza is greater than the cost. If it was £10, you would not buy. Similarly, if we spend £20 on a Sirloin steak, it indicates we give steak a higher utility than pizza.

This theory was developed by Paul Samuelson. It stated that people’s willingness to pay inferred the relative utility from their choices. It isa more in-depth method of defining utility functions from consumer behaviour.

Cardinal utility was developed and used by neo-classical economists such as Alfred Marshall, Leon Walrus and Carl Menger. They all worked on utility, assuming it could be measured in some quantifiable measure.

Ordinal utility simplifies measurement by trying to rank choices in terms of preference. For example, we prefer A to B, but cannot say how much in cardinal terms.

In the real world, it is argued that people do not really give concrete values of utility to different options. Instead we prefer different bundles, e.g. we may prefer to choose the steak over the lamb, but we don’t say how much we prefer the steak.

Ordinal utility was first introduced by Wilfred Pareto in 1906 and developed by John Hicks. 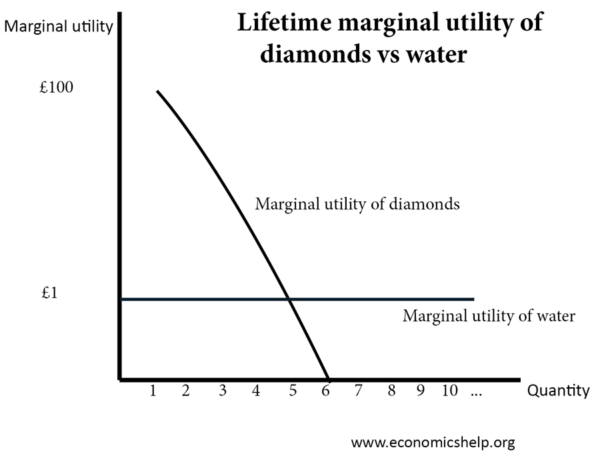 This is an attempt to place a utility on a decision involving uncertainty. It was first mentioned by Daniel Bernoulli, in 1738. “Specimen theoriae novae de mensura sortis”

John von Neumann and Oskar Morgenstern, used the assumption of expected utility maximization in their formulation of game theory.