A few years ago, I wrote several posts about the need for a government to borrow in a recession. One thing I would have said is that when the economy recovers, tax receipts will automatically rise and the deficit will fall. You could almost say ‘solve unemployment and the deficit will take care of itself.’

The logic is that even if you keep tax rates the same, economic recovery will lead to higher tax revenues, for example,

However, one feature of this recovery is that tax revenues have proved disappointing. Tax revenues have increased by a small amount, but as a % of GDP, tax receipts are struggling to keep up. In particular, corporation tax and income tax have fallen behind schedule.

This is very weak growth, when you remember these are nominal figures. 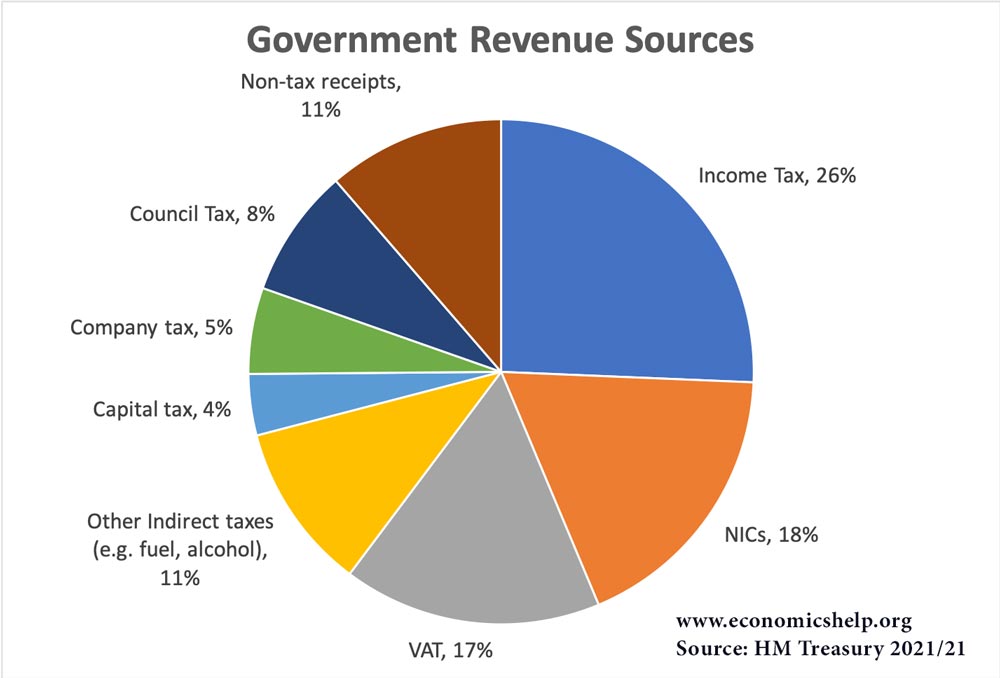 Why are tax revenues falling behind?

Income tax – The recovery has not lead to the expected rise in real wages. With low productivity, wage growth has been stagnant. Therefore, NICS and income tax have not increased like we might expect. The income tax system is quite progressive. The income tax threshold is over £10,000. Therefore, low paying jobs lead to little increase in income tax. If wages rise, we can expect a bigger increase in income tax receipts. One estimate of the HM Revenue and Customs is that a 1% rise in wages, leads to a 1.5% rise in tax receipts because of the progressive nature of the tax system.

In 1989, sin taxes (alcohol, gambling, tobacco) accounted for 5.5% of tax revenue, this is expected to fall to 3.7% of GDP by 2018. Ironically, this is partly due to the success of tobacco tax and other policies to reduce smoking rates. With fewer people smoking, tax revenues are falling, even though tax rates go up.

Fuel taxes are also expected to fall from 6.2% of tax revenue to 4.9%. In particular, revenue from fuel duty is falling because cars are becoming more fuel efficient. Combined with the freeze in fuel duty, the amount of tax motorists are paying is falling in real terms.

Stamp duty is highly volatile, with the housing crash causing a fall in prices and volumes. This led to lower revenues. However, the resurgence of the housing market will lead to improved revenues.

The disappointing tax revenues show the importance of not just falling unemployment, but also rising wages. Without rising real incomes we will continue to see weak income tax revenues.

One thing that strikes me is that all these weak tax revenues are in a way a very careful example of expansionary fiscal policy. People are paying less fuel duty, less income tax, less sin taxes; therefore, discretionary incomes are rising more than we might expect. Don’t tell anyone  but very quietly the government have been pursuing a form of expansionary fiscal policy by keeping the tax burden lower than we might expect.

Tax rates can be increased

In the long term, sometimes you have to respond to falling tax revenues by increasing tax rates. For example, there is a good case for increasing petrol tax to compensate for the increased fuel efficiency.

We can afford more spending if we want to

With tax revenues as a % of GDP very low by historical standards, it shows there is room for increasing and widening the tax base to attract more tax revenue. To deal with the gap between government spending and tax revenue, we don’t need to just rely on cutting spending, we could increase tax rates.

Reliance on a shrinking tax basis

A paradox of the rising inequality in the UK, is that tax revenue comes from an increasingly small base. In regard to income tax, we are reliant on the top 1% of high earners to pay an increasing amount of tax. The IFS state that:

The UK tax system is, in parts, quite progressive. But, there is a danger of relying on a smaller tax base that tax revenue becomes more volatile. It may also increase the risk of tax evasion.