Between 2009-16 the Portugal economic experienced a severe economic crisis – characterised by falling GDP, high unemployment, rising government debt and high bond yields. This was caused by a combination of the global recession, lack of competitiveness and limitations of being in the Euro.

What caused the Portuguese economic crisis? 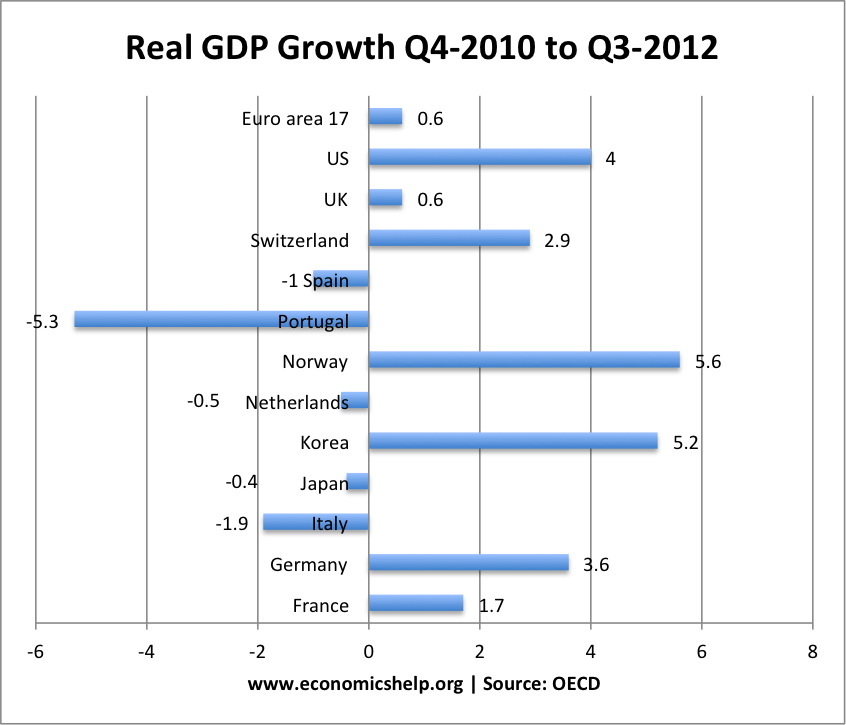 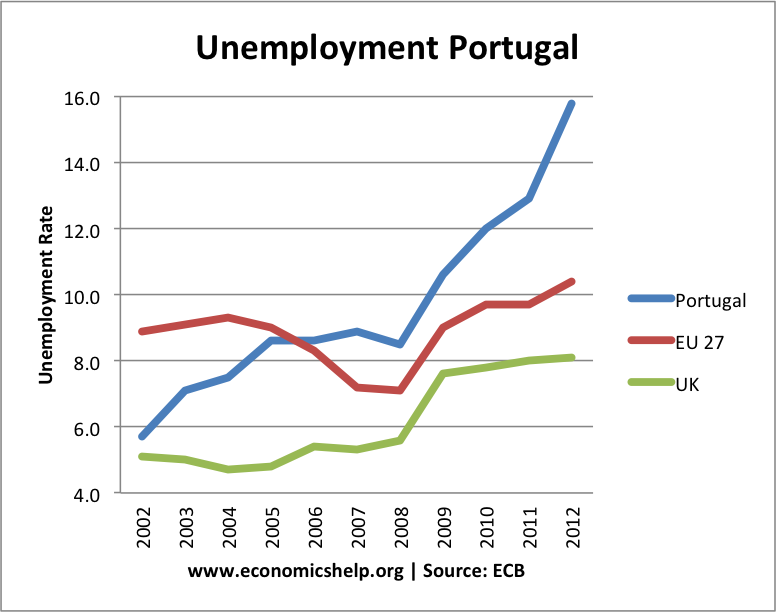 With the rapid drop in real GDP and austerity measures, the Portuguese unemployment rate has increased at one of the fastest rates in the EU.

It has got so bad, the Portuguese Prime Minister has been quoted as saying the young Portuguese, should show more effort and leave the country to get a job. ‘They should show more effort’ and ‘leave their comfort zone.’ (FT) He suggested that teachers unable to find a job at home should think about emigrating to Angola or Brazil. Unsurprisingly, the austerity measures are leading to widespread protest and concern the relatively new Portuguese democracy could be threatened by the spectre of mass-unemployment. 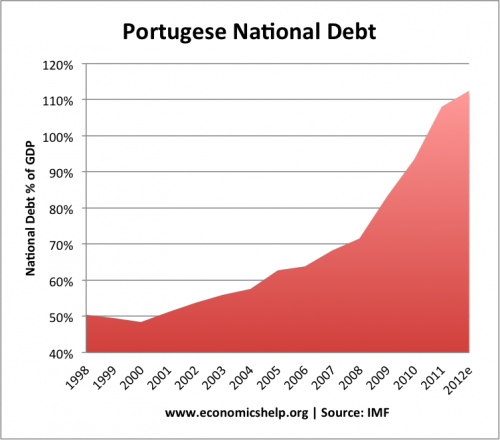 On joining the Euro, the Portuguese national debt was below the 60% limit set by the Maastricht criteria. By the start of the debt crisis in 2009, the level of public sector debt had edged up to 70% of GDP. However, the recession of 2009-12, has seen a rapid increase in the level of debt, despite efforts to reduce public spending and austerity measures pursued by the government. 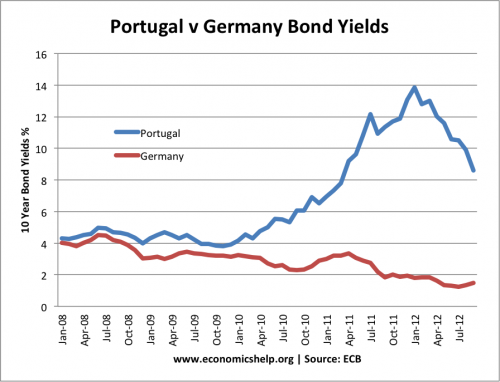 From Jan 2010, fears over the stability of Eurozone bonds spread to Portugal, and bond yields rapidly rose to unsustainable levels. This caused the government to pursue emergency austerity measures.

The rising bond yields were due to:

In response to the debt crisis, Portugal pursued austerity with great vigour Between 2009-11, the budget balance was reduced 7.9% of GDP – a large tightening given the economic situation. (See: Fiscal multipliers in Europe). The government cut spending leading to job losses and lower disposable income. Higher taxes also reduced disposable income. The impact of austerity measures also reduced consumer and business confidence. Because Portugal was in the Single Currency, there has been little other options to boost domestic demand to offset the fiscal tightening.

In this economic situation, deflationary fiscal policy has had a very high negative multiplier effect causing a substantial drop in real GDP.

There have also been concerns that the austerity measures have been self-defeating. The rise in unemployment and fall in tax revenues have placed greater strain on the government’s budget

Despite the cost of current austerity, the draft 2013 budget proposes even more austerity measures including  “enormous” tax increases, including the raising of average income-tax rates by as much as a third. Economists have variously described the proposed budget as “brutal”, “a crime against the middle class”, a “fiscal atomic bomb”. (austerity in Portugal at Economist)

In 2008, the Portuguese current account deficit was over 12% of GDP. This was a reflection of this decline in competitiveness relative to the rest of the Eurozone. 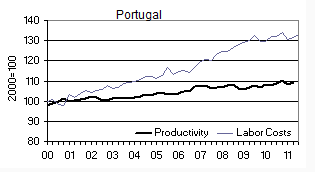