A look at the nature of the UK economic recovery. Is the recovery sustainable? Who has benefited the most from recovery? Which groups of people have not benefited from the recovery?

In the past two years, the UK economy has posted relatively impressive growth figures.

It is impressive compared to Europe, which is stuck in recession. However, the recovery is less impressive when compared to the lost output since the start of the recession and the long delay that occurred before the economy started to catch up the lost ground.

The recovery has led to a significant decline in unemployment, whilst at the same time leading to low inflation (CPI = 0.5%).

However, the UK recovery is still unbalanced and there are uncertainties about its sustainability. The main areas of concern about the UK economic recovery are:

Until very recently, real wage growth has remained negative. Economic recovery has not fed through into higher wages for workers. In recent months, there have been some signs of progress (helped by very low inflation) But stripping away bonuses, the wage figures show many workers are still not seeing the benefits of economic recovery.

It is a reflection that firms have been willing to employ more workers, but for lower wages and less concerned about increasing productivity. The hope is that this productivity lull is merely a reflection of cyclical pressures and a stronger recovery will see an upswing in productivity across the economy.

The UK has had a persistent current account deficit since the early 1980s, so it is perhaps nothing new to worry about. However, the current account deficit is an indication that the recovery is unbalanced – relying on consumer spending / imports and struggling to grow exports. Part of this deficit is due to the ongoing recession in Europe (our main trading partner). Exports to non-EU countries are more promising.

Type of employment. The fall in unemployment is unprecedented for this stage of the economic cycle. Unemployment used to be a lagging indicator – it took many years for the unemployment rate to fall after 1981 recession ended. However, the counter-point of these good unemployment figures is that we are seeing a growth in temporary/part-time and low paid jobs. In particular, we have seen a growth in zero-hour contracts leaving workers with no guarantee of full employment. Arguably, we are seeing levels of under-employment with people working less than we would like – which is seen in low wage growth. This is the other side of the flexible labour market.

Winners from the recession

Pensioners. Pensioners have been one of the best protected groups. Thanks to the government’s triple lock guarantee, pensions have done better than wages. Pension spending by the government is up 14%, or £1,100 a head, since 2010 (economist)

Homeowners. Homeowners have been another group to do very well from the economic recovery. House prices have risen sharply since 2010 and many homeowners are quietly sitting on large increases in wealth (though there is big regional disparity with house prices rising more in London and south than other areas in the north). Furthermore, homeowners with mortgages have benefited from ultra low interest rates. Even if banks have not passed full base rate cut onto homeowners, mortgage payments as a percentage of income have fallen 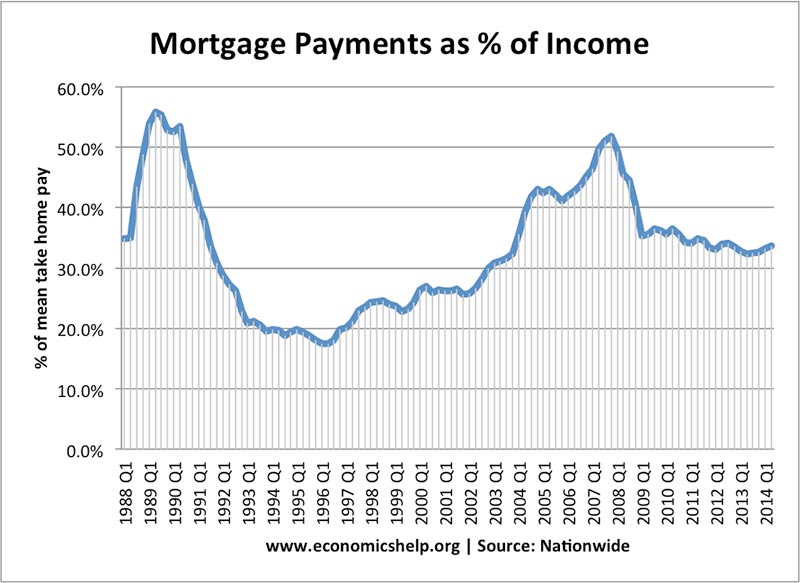 – improving living standards for those with their own house. (UK Housing market stats)

Losers from the Recovery

1. People renting. The booming housing market has led to rising costs of renting (especially in places like London and South East). This rise in the cost of renting has squeezed living standards, especially for young people experiencing low wage growth. With mortgages very cheap, there’s never been a better time to own a house, but for many young people, the cost of housing is unaffordable. Therefore, there is growing wealth inequality – an inequality often marked by age.

2. People on zero hour contracts / low paid work. The recovery has increased the percentage of low paid jobs, with flexible hours, and little job security. Arguably this is much more preferable to no employment, but it is contributing to a two speed labour market – those on the inside with good contracts and those struggling with low wage growth and poor job security.

3. People on welfare benefits which have been squeezed by government spending freezes.