With population growth averaging around 0.6 – 0.8% a year (about 50% of population growth is caused by net migration), real GDP is boosted by this growth in population. Real GDP per capita and average incomes are growing at a slower rate

It is worth bearing in mind that sometimes economic growth statistics get revised at a later stage.

An illustration of how actual GDP has fallen behind the trend growth of GDP, since the start of 2008.

Usually, the gap between actual growth and the trend rate is an indication of the output gap in an economy. But, given the length and depth of the recession, we have permanently lost some output – The ONS calculates the output gap as quite small.

This shows real household disposable income per head. This is an important component of GDP, but GDP is also composed of other income sources, such as profit and dividends. This shows that real household incomes per head have been stagnant since 2007.

Four Decades of Volatile Growth in the UK

More detail of this period:

A feature of the UK’s recovery since 2013 has been that unemployment has fallen faster than in previous recession – in the 1980s and 1990s unemployment lagged behind the recovery. This fall in unemployment is due to several factors, such as – more flexible labour markets, low wage growth and low labour productivity. (UK Unemployment mystery) 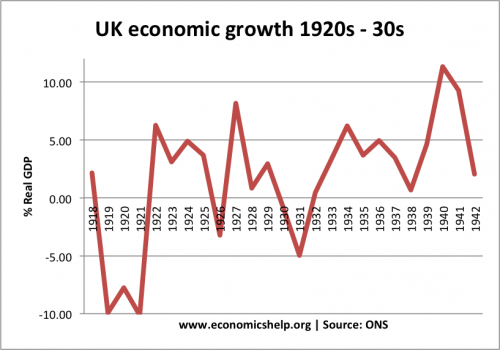 Volatile growth following world wars and period of recession in the 1920s and 1930s.