Evaluation is an important component of an advanced essay. It requires the ability to look at facts, arguments and analysis, with a degree of critical distance. Evaluation involves:

Questions which require evaluation usually have these words a the start:

1. How reliable is the data?

For any essay, you will be using a variety of sources. For example, an essay on trades unions may include information from the TUC. It is good to give data from a source like TUC. However, a valid evaluation technique is to question the reliability and independence of your source.

For example, it is quite likely that the TUC will choose statistics that are more advantageous to workers. Business organisations, e.g. CBI on the other hand, are likely to give alternative sets of data which is more favourable to their point of view.

Therefore, examine the likelihood of bias in data and resources for the essay.

The effects of a decision can be quite different in the long run. For example, suppose you had an essay, which examined the impact of an increase in tax on petrol. The obvious answer is to say: “very little, demand for petrol is inelastic”

However, it would be evaluative to say; “However, over time demand may become more elastic. After a couple of years people may find alternative ways of driving.

3. It depends on other factors

4. Look at both points of view

In subjects like economics, history and politics there are usually several different viewpoints. It is important to give them all consideration, even if we don’t necessarily agree with them. For example, if we look at the impact of a rise in government spending, a Keynesian might say this will increase growth; a Monetarist, on the other hand, may argue higher spending merely causes crowding out. Therefore, there are two different possibilities. 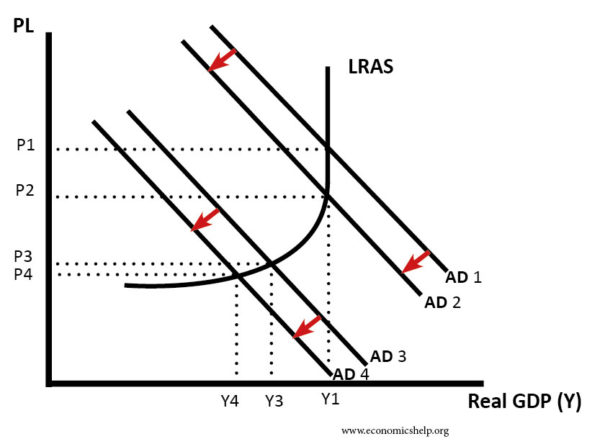 Higher interest rates would have a bigger effect in reducing inflation if the economy is at Y1.

6. How significant is a factor?

A recession in France would lead to lower UK exports to France. France is an important trading partner, however on its own French exports are only a relatively small % of UK AD.   If the rest of the Eurozone was growing, and it was just France in recession, it is unlikely to have much impact on the UK economy. However, if the whole global economy was in recession, this would be much more significant and likely cause a recession in the UK too.

As we mentioned in, UK economic growth in the past four years. How you interpret data is important.

If you showed a graph of UK economy growth since 2013 Q1 – it would give quite a favourable impression of economy.

If we look at this graph, it shows the UK economy still has a large negative output gap.

The important thing is that statistics may only tell part of the story. Just because an economy like Spain grew in the last quarter – doesn’t necessarily mean their economy is doing very well.

Discuss impact of the MPC cutting interest rates from 5% to 4.5%?

Lower interest rates make it cheaper to borrow and therefore encourage consumer spending. Cheaper borrowing also encourages firms to invest. With an increase in C + I, we see a rise in Aggregate Demand and therefore we can expect higher economic growth and higher inflation.

Examples of Evaluation of this question