What are the problems of high government borrowing?

The potential problems of government borrowing include; higher debt interest payments, a need to raise taxes in the future, crowding out of the private sector and – in some cases – inflationary pressures.

Higher interest rates. In some circumstances, higher borrowing can push up interest rates because markets are nervous about governments ability to repay and they demand higher bond yields in return for perceived risk. This was particularly a problem for countries in the Eurozone because in 2011/12 there was no real lender of last resort. In periods of high inflation, investors will also demand higher bond yields – e.g. in the 1970s, high government borrowing caused an increase in bond yields. 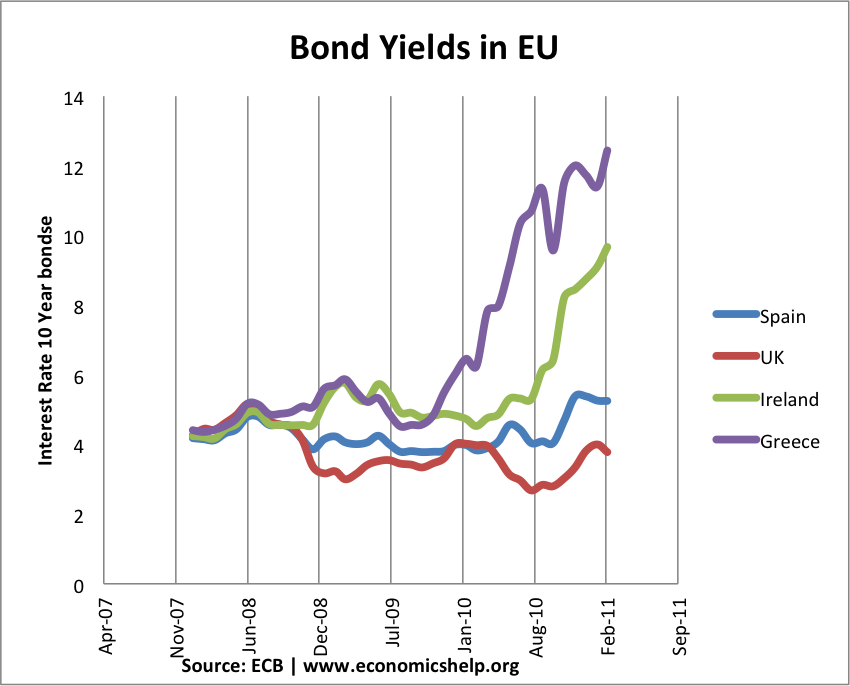 In 2010/11 – countries in the Eurozone with high deficits experienced rapidly rising interest rates because of markets fears over their ability to repay. (see: bond yields on EU debt)

Higher taxes in the future. If the debt to GDP rises rapidly, the government may need to reduce debt levels in the future. It means future budgets will need to increase taxes and/or limit spending. The danger is that if taxes are increased too early too quickly, it could snuff out the recovery and cause a further downturn. But, if they don’t raise taxes, markets may be alarmed at the size of borrowing. High government borrowing can cause difficult choices for future chancellors; it is a difficult situation to be in.

Vulnerable to capital flight. If a government finances its deficit by borrowing from abroad, then there is potential for the economy to suffer from capital flight in the future. For example, if investors feared a country like Greece would be forced out of the Euro and devalue, investors would lose out from the devaluation. Therefore, this would encourage foreign investors to sell – causing more pressure on the economy.

Suppose markets fail to buy enough gilts to finance the deficit, the deficit can always be financed through ‘monetisation’. i.e. creating money. This creation of money creates inflation, reduces the value of the exchange rate and makes foreign investors less willing to hold that countries debt.

However, in the period 2010-16 in the UK and US, quantitative easing did not cause inflation because of the falling velocity of circulation (and depressed economy). But, if the economy was close to full capacity, printing money to ‘monetize the debt’ would lead to inflation. In the case of Zimbabwe, high government debt and printing money led to a severe case of hyperinflation.

It depends on the state of the economy. In a recession, Keynes argued borrowing can be beneficial in creating economic stimulus and shortening the recession. A growing deficit when the economy is close to full capacity will be more damaging. For example, see: irresponsible tax cuts

It depends on levels of domestic saving. In 2016, Japan has a national debt over 225% of GDP, but bond yields are low because there is strong domestic demand for buying government borrowing.

It depends on levels of government debt. If bond yields are low and borrowing relatively low, a government can finance debt by a relatively small share of tax revenues. This debt is manageable.

However, if debt increases beyond a certain level and a growing share of GDP needs to go on debt repayments, debt can start to take tax revenue that is needed for public sector investment. Many developing countries suffered from a growing debt burden, which meant they struggled to meet even the debt interest payments

9 thoughts on “Problems of Government Borrowing”