Readers Question: Why is the cost of living in the UK so expensive?

The cost of living depends on:

Summary – Why is the UK so expensive

The biggest factors in determining cost of living are wage rates and housing costs. The UK cost of living is relatively high, but this also reflects the relatively high wages in the UK. The housing market is an additional complication with rising house prices and rents increasing the cost of living and associated costs. However, this tends to be quite regional with people living in London affected much more.

To a lesser extent, the UK cost of living is also affected by relatively higher transport and energy costs. Tax rates are important for goods like alcohol, petrol and cigarettes with UK tax rates higher than European / US rates.

However, although the UK is expensive in some areas, in other areas it is cheaper. e.g. US is much cheaper to eat out, but in US you have to pay private healthcare insurance.

Comparisons with other countries

Top 10 countries by cost of living.

If we measure according to local purchasing power (cost of living / average wage), the UK is the 22nd most expensive out of 122.

By comparison, Norway is the fourth most expensive at 0.99 and India the cheapest at 0.24

Firstly, the cost of living in the UK varies considerably by regions.

Why is the UK so expensive? 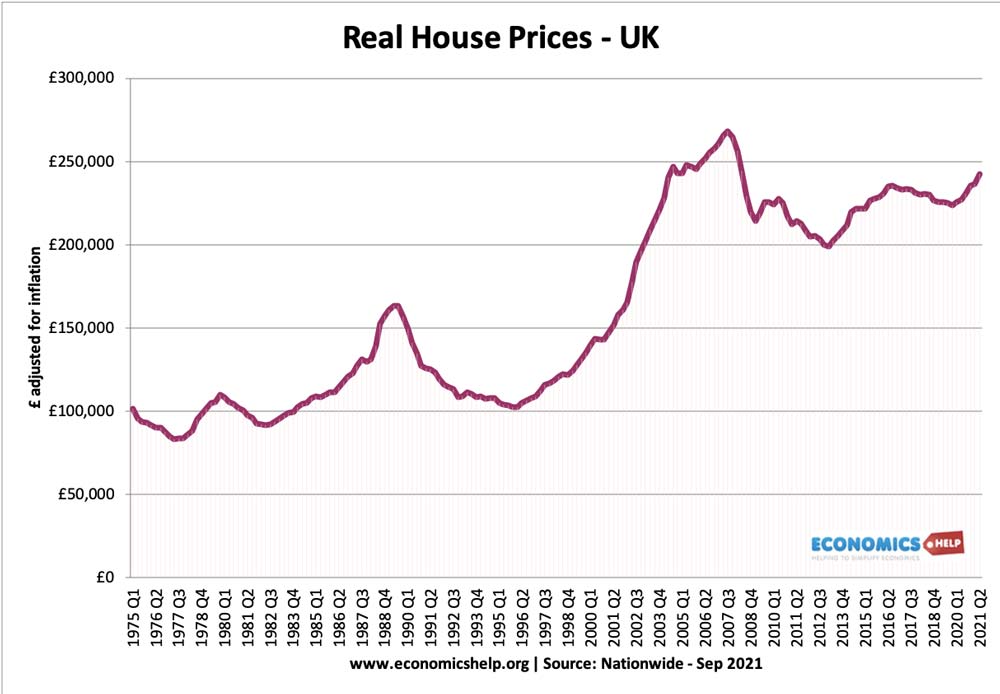 After the 2008 credit crunch, house prices in Ireland, Spain and the US fell by up to 50% and remained low, but in the UK, the price fall was more moderate and have recovered much more strongly. The main reasons for expensive house prices in the UK are:

The impact of housing on living costs 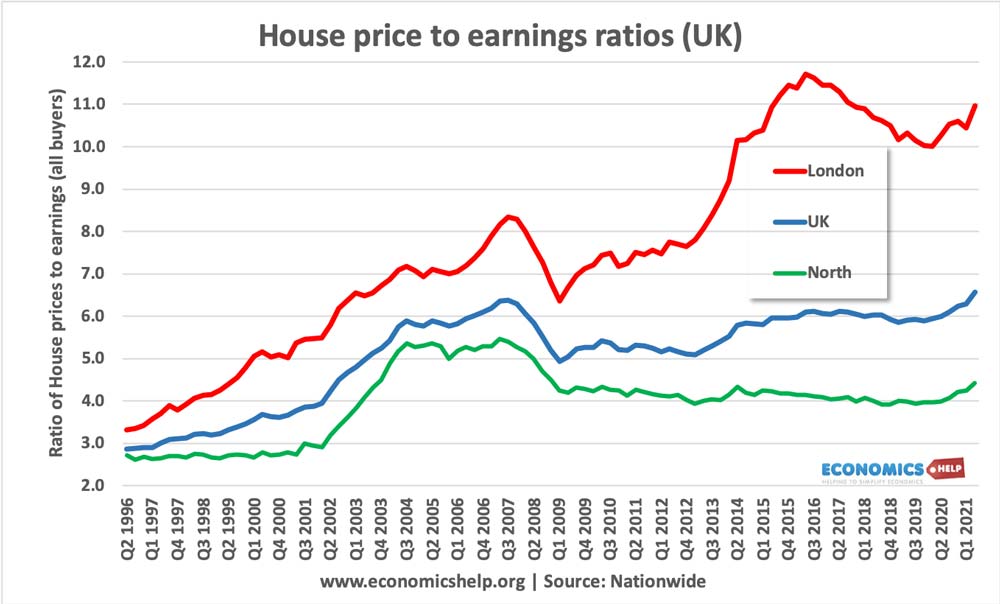 Rising house prices don’t directly affect everyone’s living costs. But, the rise in house prices and difficulty many face in buying a house have caused rents to rise, especially in property hot-spots like London.

UK transport is relatively more expensive than other countries.

UK petrol tax is relatively high, which increases the cost of driving. (From an economic perspective the relative high levels of congestion on UK roads could be a justification for higher petrol costs.) The price of motoring is likely to rise as UK roads become more congested. IN the long-term, electronic road pricing is more likely in the UK than countries with lower population densities.

UK train fares. UK train fares have been rising faster than inflation and the UK commuter tends to spend a higher percentage of income on rail fares than European counterparts. According to Guardian:

“A British worker on an average salary of £27,200 a year will be spending 17% of their wages on a £391 monthly season ticket from Brighton to London once the fare rises come into effect, according to the analysis. Workers making similar journeys spend 12% of their salary on train fares in France, 9% in Germany, and 6% in Spain and Italy.”

The UK does have cheaper off-peak fares, booked in advance, but travel same day, business tickets tend to be more expensive per mile, than European counterparts.  Reasons for expensive train fares, include cost of investment in infrastructure (wage costs), privatisation and loss making nature of some lines.

Some people have put forward the argument that privatisation has been a factor behind the higher cost of living in the UK. With rising prices in trains, gas and water caused by private companies seeking to make higher profit. For example, falling prices of oil and gas has often not been passed quickly on to consumers. According to this site (Corporate Watch)

“Between 2007 and 2013, household gas and electricity bills rose in real terms by 41% and 20% respectively. In real terms, water bills have increased by 50% since privatisation, while rail fares are 23% higher than they were in 1995.”

However, privatised companies (unsurprisingly) disagree. They argue that only a small % of the final price is a profit margin (e.g. 3% for train companies). They argue the rising costs are associated with the expensive costs of running services and the capital investment to keep the infrastructure up and running. Also, it is important to note that not all privatised industries have performed the same. After privatisation, prices of telecoms fell significantly, due to improved technology. Sometimes, we are selective – high price increases stick in the mind, price falls are less visible. Many people tend to over-estimate their own inflation rates.

Also, these markets are regulated by OFGEM and OFWAT who have, in theory, the power to limit price increases by these monopoly firms.

The CPI measures a typical basket of goods. However, people on low incomes and pensioners may not buy the typical basket, but just buy basic necessities, like food, travel and household expenditure. At certain times, this basic basket of inflation may rise faster than the official CPI. For example, luxury items like electronics may fall, but food could increase by more than CPI, therefore, people on low incomes may have a rise in the cost of living, which is greater than actual inflation. For example, research by Joseph Rowntree Foundation found that in 2013, the cost of living for poor people rose 25% – more than the 17% official CPI inflation.

A key factor in the cost of living will be wage costs. Rising wages will lead to higher cost of services, such as hairdressing and restaurants. The UK has a relatively higher minimum wage than say the US. The new ‘living wage’ will increase minimum wages even more. This is likely to feed into higher costs for services, such as cleaning, and entertainment. It will increase the cost of living, but at the same time, the increase in real wages will make living costs more affordable for those on low income.

In making international comparisons, there is a strong link between relative wage costs and average costs of living. For example, India, the cheapest country for cost of living has a monthly wage of $295 (ILO stats). The UK has the 5th highest average wage at $3,065 per month.

Since 2007, real wages in the UK have stagnated. Inflation has been higher than nominal wage growth.

26 thoughts on “Why is cost of living in UK so expensive?”