Last Thursday the OBR published a detailed forecast for the UK economy. It made for grim reading – the longest recession for a generation, falling disposable income and real wage growth around 35% less than its pre-crisis trend rate.

Amongst the dire economic predictions, the OBR forecast house prices in the UK would fall 9% in 2023 and not recover their current level of around £290,000 until Q4 2027 – which could mean at least four years without house price growth.

A 10% fall may not seem that much but given we also have current inflation of 10%, the real, inflation-adjusted change in prices, will be closer to – 20%.

Another interesting feature of the OBR forecast is how much has changed since their earlier March 2022 forecast. You can see that in March, the forecast was only for a brief stagnation before resuming their upward trend.  But, seven months later, this outlook has become much more pessimistic. From this, we could summarise two things.

Firstly, just to recap the basic situation of the UK housing market. 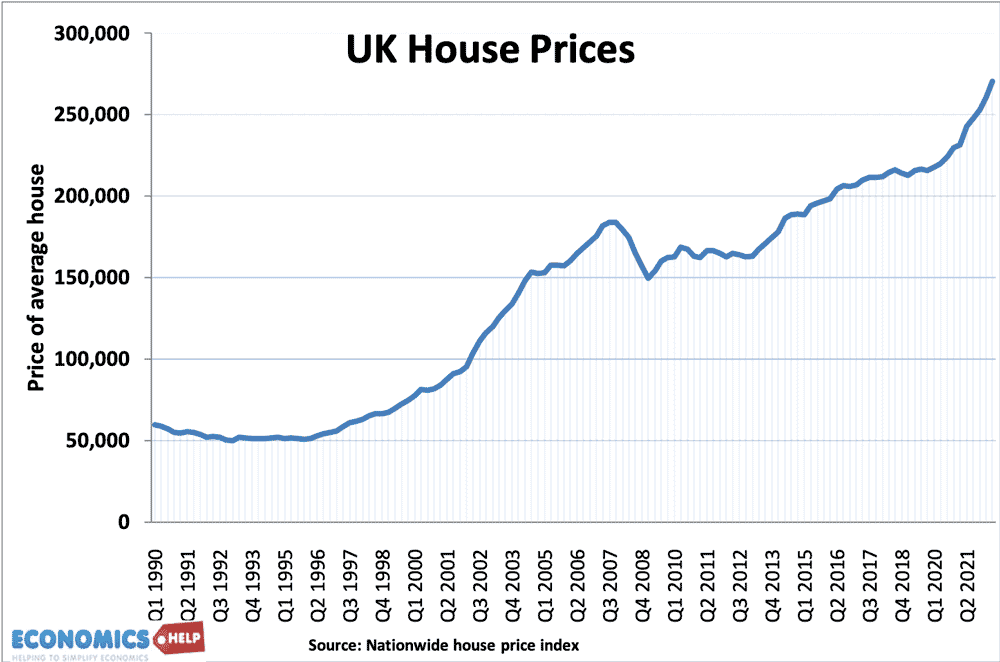 Prices have increased 80% since 2009, despite a period of low economic growth and barely any increase in median wages. According to Nationwide, the result is UK house price to incomes ratios have reached an all-time high of over 7.

If we use ONS measure, the house price to income ratio has reached nine. The difference is due to different ways of measuring household earnings. But, the main thing is – as we all know, house prices are very unaffordable.

But of course, there is also a big difference depending on geographical location The ONS show how house price to earnings ratios varies from 13.7 in London to 5.3 in the North.

Of course, even within these regions there can be a big variance in prices. But, clearly, London and the South East are more vulnerable to falling prices.

Nevertheless, it wasn’t these house price to income ratios that caused the OBR to become much more pessimistic in the last seven months.

Basically, back in March, we were forecasting only a small rise in interest rates. But, since then the OBR forecasted mortgages to rise to 5%, and only slowly come down. This fairly modest rise in mortgage rates actually makes a huge difference for mortgage holders. The effective mortgage payments as a share of income are close to 2008 levels.

With interest rates of around 5%, mortgage payments will be around 45% of take home pay.

At these levels, with a cost of living crisis, higher taxes and falling real incomes, some may be unable to afford mortgage payments, but perhaps more importantly it is a huge disincentive for people to try and buy.

Why would prices fall, when many households are wealthy and own the house outright.

It is true that wealth has accumulated in the past decade. And around 36% of homes are now owned outright or with small mortgage balances. These homeowners will remain largely unaffected by rising interest rates and house price-to-income ratios. Also, these homeowners are in a position to help their children get on the market. This is one reason house price to incomes ratios have risen in long-term.

However, in short-term at least, a key factor in determining prices is the number of first time buyers coming onto the market. If the number of buyers fall then it puts downward pressure on prices. The fact many millions are happy to hold onto their homes doesn’t change this.

The high-interest rates, combined with falling real incomes and economic uncertainty, mean the number of people wishing to take the first step into the market will fall. New Buyer enquiries have fallen sharply in the past month, and are likely to keep falling over the winter.

Sellers may respond by taking their house off the market, and waiting for conditions to improve, this will limit price falls. Certainly, the number of transactions is likely to fall in 2023. Residential transactions are also predicted to fall, from 1,243,000 in 2022 to 1,051,000 next year.

Also, the new expectations of falling prices, are another reason first time buyers may wait.

However, the number of homes owned outright, and high level of wealth is a factor which will prevent any kind of collapse in prices.

For example, in the early 1990s, a combination of high unemployment and interest rates of 15% did lead to a sharp rise in repossessions and therefore, an increase in the supply of homes at a time of falling demand – causing a big fall in prices.

In 2023, the number of repossessions will be limited by a few factors

How will rents be affected by falling prices?

In brief, the outlook is grim for the rented sector.

There is shortage of properties coming on the market. This is partly due to the rise in homes let via Air BnB. At the same time, national tenant demand is very strong due to rising population and the unaffordability of buying a house.

So many landlords who face higher mortgage payments may try to increase rents to meet their own costs. Given the limited supply, they have the market power to do this. You can see there is a strong expectation of rising rents, with rising tenant demand.

It’s a rent rise at exactly the worst time for young workers squeezed by the cost of living.

How will house prices be affected by the recent budget?

Some specific measures in the budget will hit the housing market

Should I wait or buy?

My advice is that if you are buying a house to live in, don’t wait. Don’t try to be over clever and hope prices fall a lot. It is also worth bearing in mind, Uk house prices have often defied gravity. In the very long-term the fundamental shortage of housing is going to keep them expensive. Why spend money on rent, when you can start investing into repaying your mortgage. House price are going to fall, but it is highly unlikely to see a Florida style 2008-crash. Some global housing markets are more vulnerable than the UK, and I would like to look at them in the future.