UK House price to earnings ratios  (all buyers) reached a peak in 2022. Above the 2009 peak, which preceded the housing price falls.

The house price to earnings ratio is most extreme in London, with the ratio reaching 11 times salary. Housing prices in the North, Scotland and Northern Ireland are relatively cheap.

In many parts of the country, potential buyers are being kept out of the market due to house prices being much higher than average incomes. For young people especially, owning a home has become increasingly unrealistic because the deposit required is out of reach for most  workers.

This shows average house prices – adjusted for inflation. It shows that house prices have risen considerably faster than the average price level.

Mortgage payments as % of income

One useful measure of housing affordability is to look at mortgage payments as a percentage of income. 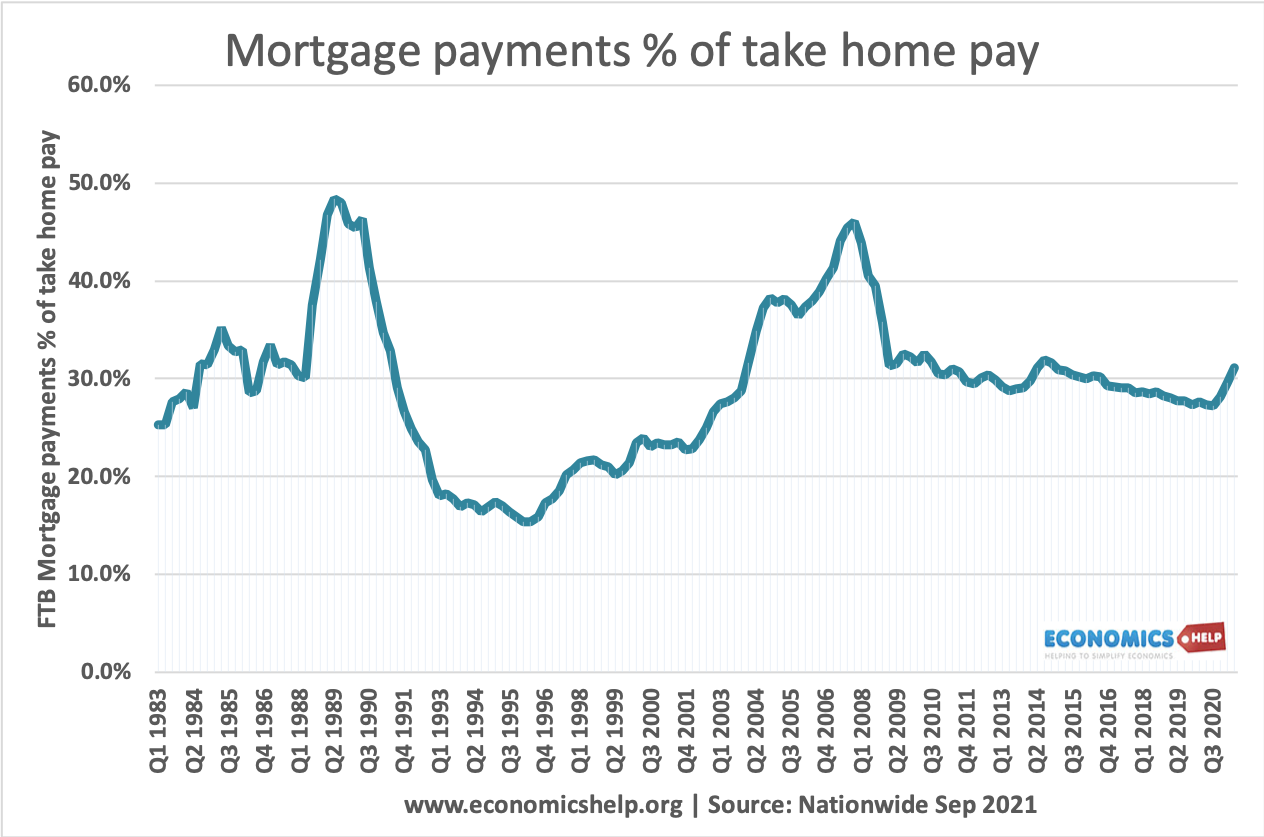 Since interest rates were cut in 2009, mortgage holders have benefitted from low-interest rates, which have made mortgage payments cheaper.

UK base rates are starting to rise from historical lows – which will increase the cost of mortgage payments.

The graph shows a significant rise in average incomes of those with mortgages. 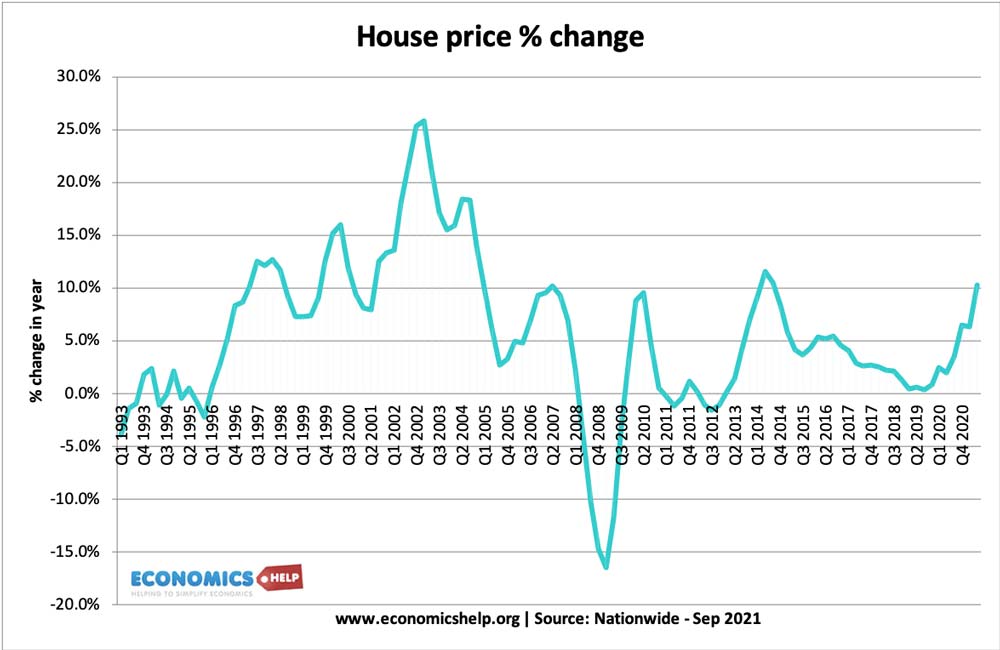 What explains the lack of Affordability?

1. Lack of Supply. After the credit crunch, house prices in many countries, such as the US and Spain fell dramatically. But, in the UK, the drop in house prices has been more muted. This is because the UK never had a boom in house building like other countries.

Housing completions fell close to 150,000 a year in the aftermath of the financial crisis– well below the level (300,000 government target) needed to meet the growth in the number of households.

2. Relative attractiveness of owning a home. Low-interest rates have meant many homeowners have been able to hold onto their houses. The mortgage repossession rate has remained much lower than in the 1992 recession. The low cost of mortgages makes buying still attractive compared to renting, which is expensive.

3. Demand from abroad. The London property market is marked by strong demand from abroad which has kept prices high, especially on the luxury end of the market. In London, 7 out of 10 homes over £5 million are going to foreign nationals (this is London)

4. Regional Differences First-time buyer ratios are much lower in the north. London ratios are almost twice as high. The housing market has become increasingly marked by regional differences. Property hotspots have seen prices go through the roof, whilst other areas have seen prices stagnate or even fall.

5. Population Growth. The 2021 census showed the fastest rise in the population of England and Wales to 59.6 million. The growth in the number of households is even greater – increasing demand for housing. The number of households in England is projected to grow to 27.5 million in 2033, an increase of 5.8 million (27 percent) compared to 2008. This equates to 232,000 extra households per year. (Household projections 2008-2033 – Data.gov)

If you ask an average young person in the street about the affordability of housing, you are likely to hear strong anecdotal evidence that they are not affordable. For many, buying a house looks increasingly difficult. –  at least not without help from parents with the deposit.

Because of ultra low-interest rates, the cost of mortgage payments as a percentage of income looks relatively low. But, since the mid-1990s, house prices have increased substantially more than inflation. It now requires a very high deposit and this is a big barrier to buying a house.

Furthermore, the era of zero interest rates will not last forever.

5 thoughts on “UK House Price to income ratio and affordability”