Trickle down economics is a term used to describe the belief that if high-income earners gain an increase in salary, then everyone in the economy will benefit as their increased income and wealth filter through to all sections in society.

How the trickle-down effect may work in theory

If the richest gain an increase in wealth, then

An important element of the trickle-down effect is with regard to income tax cuts for the top-income earners. It is argued that cutting income tax for the rich will not just benefit high-earners, but also everyone. The argument is as follows:

A study by NBER June 1997 Engen and Skinner conclude that:

I have a joke about trickle-down economics. Only 99% of you will get it.

Many economists are sceptical of the belief in ‘the trickle-down’ effect. One reason, the wealthy have a higher marginal propensity to save, and also n recent years, wealth has been saved in off-shore accounts to avoid paying tax. Therefore, when the wealthy gain extra income, only a small percentage may filter through to low-income workers.

Also, some studies suggest that increased income inequality can lead to this inequality being solidified through educational opportunities, wealth accumulation and the growth of monopoly/monopsony power. Furthermore, increased inequality may lead to lower rates of economic growth.

Tax cuts have no clear impact on growth. In The Economic Consequences of Major Tax Cuts for the Rich (2020), by David Hope and Julian Limberg, the authors found tax cuts for the rich, had no statistical effect on economic growth. They looked particularly at the 1980s in UK and US, where significant taxes were cut.

“The results also show that economic performance, as measured by real GDP per capita and the unemployment rate, is not significantly affected by major tax cuts for the rich. The estimated effects for these variables are statistically indistinguishable from zero.” (LSE)

Real GDP and Median wages in the US

In the US, real GDP has grown faster than median wages since the early 1980s. In the 1980s, taxes were cut for high earners and there was a significant increase in inequality. Proponents of the Reagan tax cuts and supply-side economics argue it was worth it because everyone benefitted from rising GDP. However, the median wage, (which is the wage the middle-income earners actually receive has increased slower than real GDP, suggested not all the gains of the top 1% have trickled down to average workers.

Inequality and lower growth. A recent report by the OECD found that since the start of the credit crisis in 2008, inequality has widened in many countries; however, this inequality has led to lower rates of economic growth not higher.

This graph from an OECD report suggests that inequality is responsible for lower GDP. The OECD estimates that the UK economy would have been more than 20% bigger had the gap between rich and poor not widened since the 1980s.

Ronald Reagan and the trickle-down effect

Ronald Reagan was closely associated with the trickle-down effect in the 1980s. This is because, during his presidential term, he cut income tax for the high earners. He did not sell this policy on the grounds that ‘there will be a trickle-down effect.’ However, opponents often claimed that there was a limited trickle-down effect with median wages growing very slowly – compared to wages for the top 1% of income earners. 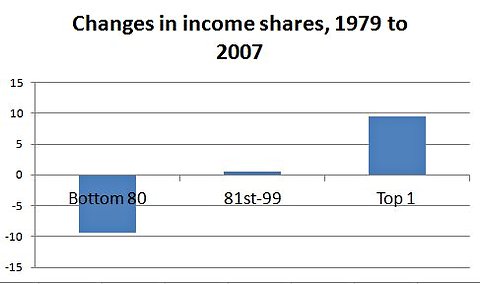 Does higher company profit trickle down to the rest of society?

Higher profit can trickle down to everyone in society.

However, it depends on how profit is used.

In the past decade, US corporation profit has increased significantly, but this has not trickled down into higher real median incomes. Cash reserves of many IT firms have risen significantly.

Note this figure for corporate profit is nominal (it does not include inflation. Inflation has averaged in the region of 2-3% a year since 1990)

5 thoughts on “Trickle down economics”