New statistics from the ONS, show that there are large disparities in wealth within the UK.  In 2010/12, aggregate total wealth of all private households in Great Britain was £9.5 trillion, (increasing from £9.0 trillion in 2008-10.

Some highlights from the report

Wealth is a stock of assets that an individual has at any particular time; this can be assets in the form of money, pension, shares or property. The ONS split wealth into four main categories

The closer the curve is to the line the greater the equality of distribution. Financial wealth has the greatest degree of inequality. 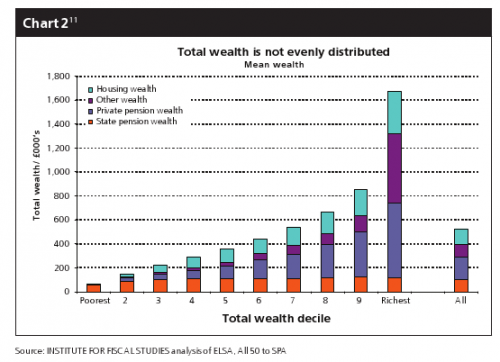 Reasons for wealth inequality in the UK

Wealth inequality varies throughout different regions. Because London property prices are higher than the national average then wealth inequality is much greater in the capital. According to  In Injustice: Why Social Inequality Persists published by Policy Press, Danny Dorling.

3 thoughts on “Wealth Inequality in the UK”