The UK government faces a perilous situation. In the short-term, there is a combined threat of an energy crisis, high inflation, risk of an imminent recession and a falling value of Sterling. On top of that, there are long-term problems such as climate change, a slowdown in growth and productivity, and rising debt to GDP.

The government’s proposed solutions are quite striking with one of the biggest interventions in the economy in recent years. Their main proposals are 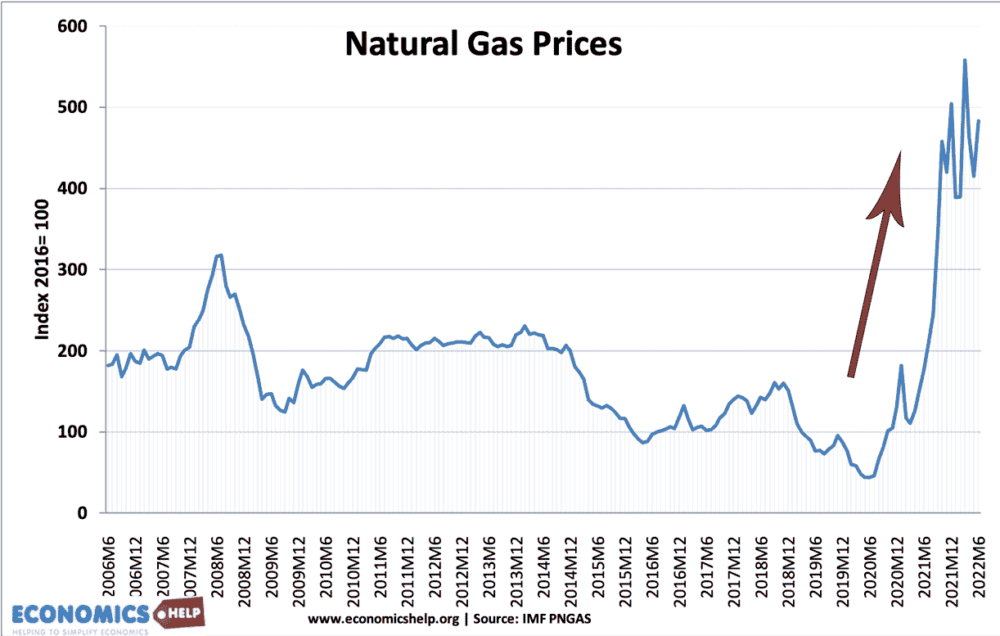 The headline intervention is the energy bailout, which will prevent catastrophic price increases due to rising gas prices this winter. The benefits of this are to avoid a further decline in living standards and prevent costs from becoming even more excessive for business. Also by limiting energy price rises, it will limit the rise inflation to 11% (rather than 13-18%).

It is a necessary intervention, something had to be done, even if imperfect, the main thing is to prevent a meltdown in living costs and forcing businesses to close from excessive energy prices. However, it still does raise some concerns.

Alternative solutions could have been more direct income support rather than capping prices. This would create more incentive to reduce demand (and prevent gas shortages) and target support to those who need it more.

I understand there is a logic that the energy price cap is at least simple and easy to understand and avoids some people slipping through net, but a side-effect of the chosen solution is that it will go disproportionately to high-income earners, which is a problem given tax cuts (and ending cap on bankers bonuses) will disproportionately benefit high earners too. Also, price caps discourage efforts to reduce demand, install solar panels e.t.c.

The good news about tax cuts is that it will to some extent stave off a dramatic fall in aggregate demand and imminent recession (which recently the Bank of England predicted to be the worst in living memory). The bailout and tax cuts are a very large fiscal expansion, which will provide some boost to demand at a time of falling spending and weak growth.

Tax cuts pay for themselves

A real area of concern is that the Conservative government appear unwilling to allow the OBR to publish forecasts for debt, and they talk of ‘tax cuts funding themselves and everything will be OK when tax cuts boost the rate of economic growth. This is what might politely be called ‘fantasy economics.’

It is true right-wing leaning economists like Greg Mankiw may claim a 1/3 of tax cuts end up paying for themselves with higher growth. But, a left-wing leaning economist like Paul Krugman is more unforgiving arguing the idea tax cuts pay for themselves is the ultimate ‘zombie’ idea that no matter how many times it is disproved it doesn’t go away. (partly because it is so politically appealing) (More papers on this subject here)

The problem is that with rising interest rates, the cost of servicing UK debt is going to rise significantly. One forecast suggests UK debt interest payments could surge to £118 bn for the current financial year alone, £35 billion higher than previously forecast (on the back of higher rates and higher interest rates).

A real problem the UK economy faces is a slowdown in productivity growth since 2007, partly due to an unwillingness to invest by firms but also demographics, technological factors and weak demand. Tax cuts alone will not change this dynamic, especially given all the continued global uncertainty, higher costs, weak demand and issues relating to Brexit.

Stamp duty is a distortionary tax which discourages people from moving. In theory, there are advantages of abolishing stamp duty to encourage greater flexibility in the housing markets (e.g. make it easier for people to downsize or upsize). But, given the increasing wealth inequality in the UK, a cut in stamp duty needs to be part of a bigger package to address the huge wealth inequality (and intergenerational equality) which would be worsened by cutting stamp duty. Also stamp duty raises in the region of £17bn.

The government are right to take big action for this unprecedented challenge, some of which is out of its control. They do face a challenging economic climate with an unwelcome combination of inflation, recession, and rising energy prices. However, although this package does stave off the worst impact, there is a sense of a missed opportunity.

The faith in trickle-down economics and tax cuts to revitalise the UK economy and create some kind of ‘economic miracle’ is misplaced. It reminds me of the late 1980s, when chancellor Nigel Lawson talked about an ‘economic miracle’ from the 1980s supply-side policies, allowing UK growth to increase to 4%+ – but this was just hubris and we ended up with a boom and bust (recession 1990/91).

Also, the energy crisis may not go away for quite a long time, the UK desperately needs to develop more renewable energy, insulate homes and businesses and wean itself off fossil fuels (for both economic and environmental reasons). If the government is going to borrow an extra £140bn + then there should be more targeted use of public money for these goals of renewable energy and better insulation.

Also, the distributional effects of the bailout are skewed towards the highest earners, both tax cuts and energy bailout will benefit higher earners significantly more. The government would get two significant benefits from more targetted help to low-income earners

1 thought on “Truss Economics – Will tax cuts save the UK economy?”