Since their peak in August 22, UK House prices have fallen 5%, but the big question is how much will they fall in the next 12 months? Expert predictions range from a modest 2% decline to a fall of 12% from Capital Economics.

Why has the market turned so quickly and could the house price correction be even worse than forecasts predict?

Sweden is a good example of how quickly a housing market can turn. They don’t even have a big buy-to-let market, but since interest rates started to rise last year, house prices have fallen 20%. Since 1981, there was a prolonged boom in Swedish house prices as low-interest rates and poor asset returns encouraged people to put their money in housing. But, as interest rates rise, the economics of buying suddenly changes.

And this will be a global phenomenon for 2023.

Canada is predicted biggest falls of 30%, the UK by contrast is more moderate.

Rising interest rates is the main factor behind the pessimistic predictions for the UK market.  Mortgage rates have soared from under 2% to nearly 6% in just a few months.

It is true interest rates have been much higher in the past, but that is only part of the story. House prices are simply much more expensive. In 1991, average prices were £55,000 compared to £265,000 today. To put into perspective the average UK deposit for first-time buyers is now £60,000 more than average prices in 1991.

The key metric is how affordable mortgage payments are. As a share of take-home pay, mortgage payments have risen from 28% to 40% and could go even higher in 2023. At this kind of mortgage payment, many would be buyers just can’t afford. Even though renting is expensive, rising interest rates make it relatively cheaper than a mortgage for the first time in many years.

Now, it is worth pointing out that the UK housing market is highly regional. You can see that the share of mortgage payments varies from 24% of income in Scotland and the north of England to 67% in London. This of course makes London prices much more vulnerable to falls than the north. But still all areas will see rising costs this year.

Another warning sign for the UK housing market is the ratio of house price to income ratios. The Nationwide index reached a record last summer of 7 times earnings – higher than the financial crash of 2008. The ONS measure gives a ratio closer to nine times earnings. A combination of rising prices and falling real wages, all increasing the overvaluation of UK housing. 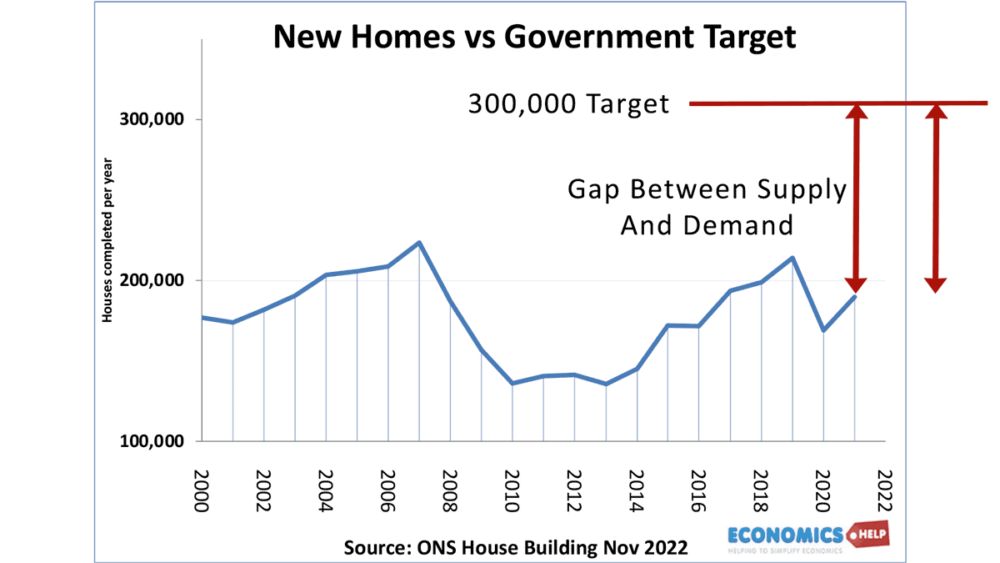 At this point some might say, the fundamental shortage of housing means that they are not going to fall – or only a very little. The argument goes that although housing is mostly unaffordable for young people, they have been squeezed out by older wealthier people anyway. Homeownership rates for the young has alreadyu fallen. However, whilst lack of supply is important in the long-term, it would be a mistake to place too much emphasis on this – at least in the short term.

The housing market needs new buyers. If potential new buyers are not able to afford, then prices will fall. The fact many old people own a house outright won’t prop up house prices on their own.  What counts is the new demand

Another factor putting downward pressure on prices in 2023 is expectations. Since people widely expect price falls, who is going to want to pay the full asking price? Buy to let investors an important player in the housing market are now seeing gross yields fall and the cost of their mortgages rise, why would investors want to buy in a time of falling prices?

On the theme of investment, the housing market has done very well in the last 15 years because the real rate of return on other investments has been so poor. If bond yields are close to 1%, buy to let with yields of 4-5% looks much better. Julian Jessop of the Daily Telegraph recently reported that Bank of England analysis suggested a 1% point increase on index linked yield could lower the equilibrium level of real house prices by as much as 20%.

This is because – If interest rates remain high, investors will find new investment opportunites and this could fundamentally reduce house price growth over the next few years.

A key factor is how much will interest rates rise and will they stay above 3% for a long time? A lot will depend on inflation. The Bank of England are forecasting inflation will fall sharply in 2023 and if this does occur, it will be good news for homebuyers, the Bank may be able to limit interest rate increases. However, forecasts on inflation have often been over-optimistic. In January, wages showed average wages rising 6.5% – this suggests underlying inflation which will take time to fall.

What about the very long-term? is housing still a good investment? Yes. Housing will always be a good investment – especially when the rise in the number of households is significantly faster than the growth in supply. Recently the government backtracked on legal targets for councils to build houses. This means in areas where houses are most needed, they won’t be built. The UK’s chronic shortage of supply shows no sign of abating. A Labour government in 2024 is more likely to be pro-housebuilding, but governments of any stripes rarely meet its own pledges.

Now having been mostly pessimistic about house prices, there are two factors which will moderate the price falls.

Also, what about current homeowners, how will they be affected by rising interest rates? It will certainly be a shock (I’m not looking forward to my 2 year fixed deal ending this summer) and could cause a rise in arrears But, some things are different to 1991 and 2007, banks are strongly encouraged to avoid repossession, – in periods of distress you can now easily switch to interest-only for a temporary period. Also, despite grim economic outlook, one piece of good news is that unemployment is near historic levels. It is very hard to see the rise in unemployment to 10% we saw in 1991 or 2007. Therefore, although new buyers will be thin on the ground, there won’t be a surge in selling from homeowners who can’t pay. Therefore, we won’t see a 30% crash like in 1991.

There are conflicting forces in the housing market. There is a fundamental shortage of supply, which moderate any house price crash. Yet this year buyers will really struggle with higher interest rates. And if interest rates remain elevated for a long-time it will definitely be interesting to see whether it encourages investors to look beyond the housing market and that could reduce equilibrium prices by more than some expect.