In 2016, some argued the UK had the best of both worlds – membership of the EU, but opt outs from the Euro and Schengen Agreement, plus a generous rebate.

However, since leaving the EU, the UK economy has experienced numerous problems, lower growth, lower investment and devaluation of the Pound, with some arguing GDP is 5.5% less than if we had stayed in EU. The dismal economic outlook has seen support for rejoining the EU surge to the highest levels since the referendum, with a large majority saying “leaving was the wrong decision.

But, after years of tortuous Brexit negotiation, the EU would almost certainly not give the UK their former ‘Germany +” special deal. Rejoining would probably mean accepting Shengen, the Single Currency and losing the rebate.

So the big question is – would the UK economy benefit from rejoining the EU, if it meant membership of the Euro? This debate is also important for Scotland should it gain independence and wish to join the EU. Would a Euro work for Scotland?

Firstly, in the Euro, the UK or Scotland would lose monetary independence. Interest rates would be set by the ECB, for the whole Euroarea – not necessarily in the best interest of the UK. They may be too high or too low.

Secondly in the Euro there is no exchange rate flexibility. The value of the Pound cannot fluctuate to absorb higher inflation or falling productivity.

The best illustration of the dangers of the Single Currency is the Euro crisis of 2010-12. In the early 2000s, southern European countries became uncompetitive because they had higher inflation than Germany.

This led to their exports becoming uncompetitive and record current account deficits.

In the recession of 2010, countries like Greece, Portugal and Spain were stuck, they couldn’t devalue, they couldn’t cut interest rates or print money. But things got worse – Because they had no independent Central Bank bond markets became nervous about their liquidity and sold debt causing a surge in bond yields.

The response of the EU was that Greece and others should pursue devastating austerity – higher taxes, lower spending to try and reduce budget deficit. But, this austerity was self-defeating, causing even deeper recession and falling tax revenue. As Paul Krugman said “the Greek economy collapsed, largely as a result of those very austerity measures”

It was a real disaster with the Greek economy suffering unemployment of 25% and a recession deeper than the 1930s. Outside the Euro, the Greek and southern economies would have had a much less painful readjustment with lower unemployment. They could have devalued currencies and pursued independent monetary and fiscal policy. At the time, it appeared the Euro was a broken project – too ambitious with under-performing countries at risk of being pushed into an austerity black-hole. The UK’s decision to stay out of the Euro looked genuinely inspired.

However, the story doesn’t stop there. Facing a Euro crisis, the President of the ECB, Mario Draghi made a speech saying they would do whatever it is necessary. This involved buying bonds to calm markets and bring bond yields down. This reduced the pressure for spending cuts. Since 2012, forecasts of the Euro’s demise have proved unfulfilled and countries highly divergent from Germany are still been keen to join.  There are now 20 member countries in the Euro.

In recent years, we can see a strong link between UK rates and ECB rates because the economic cycles are closely linked. However, it is argued the UK should retain its own monetary policy because we are unusually sensitive to interest rates due to the prominence of the UK housing market and the number with variable mortgages. If interest rates are slightly wrong, it could cause problems. For example, the Great Financial crisis of 2009 hit the UK economy hard because of its reliance on financial services. In response UK cut rates to zero – below that of ECB and the UK pursued QE. In 2011, the ECB actually increased interest rates and were 2% higher than UK. In the Euro, the UK recession would have been deeper.

Another interesting thing is to look at relative inflation rates. Firstly, the inflation cycle is closely linked, suggesting that the UK economy moves in a similar pattern to the Eurozone.

However, between 2016 and 2021, the UK does have a higher inflation rate, indicative of the Pound’s devaluation and lower productivity. Without the ability for the Pound to fall, the UK would have become more uncompetitive

Yanis Varoufakis, a former Greek finance minister remains very critical of the Euro arguing that it promotes division rather than convergence. He points to poor growth amongst intra-Euro trade, and the strongest growth and convergence come with non-Euro member countries like Poland and Czech. He points to the big swings in the Polish Zloty which gave the Polish economy more flexibility. A flexibility that is lost in the Euro.

Certainly, for tourists the Euro is convenient but for business these benefits are very minor. The UK and city of London really didn’t suffer from being outside Euro. Of course, Leaving the Single Market is a completely different matter. 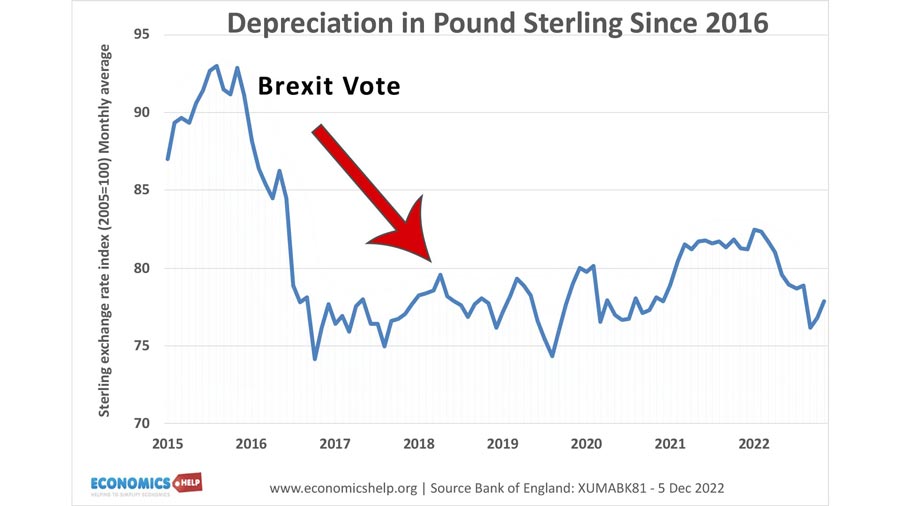 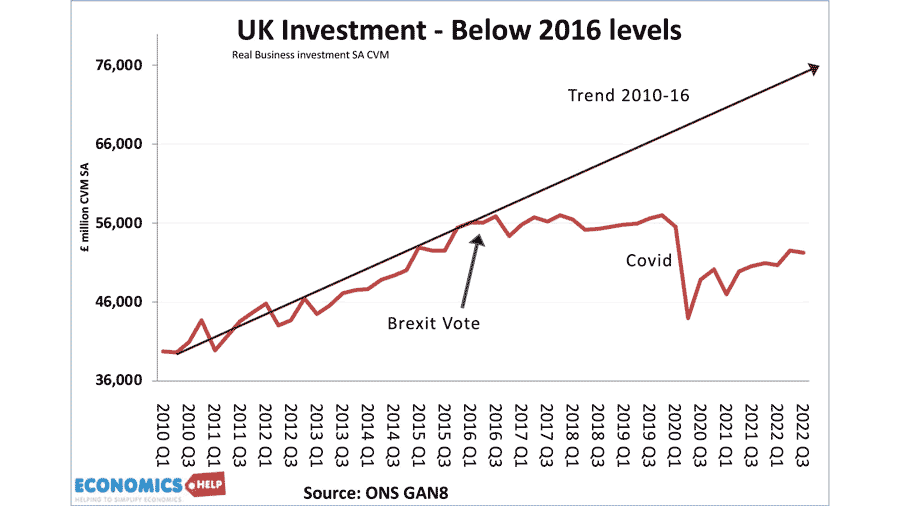 A significant political challenge of rejoining the Single Market would be accepting free movement of labour. How would that affect the economy? Free movement of labour would increase economic growth, and improve tax revenues. But it does come with costs, increasing population will put more upward pressure on house prices and rents – which are already unaffordable. The big question is whether this time the government would actually be able to invest in areas seeing large scale net-migration.

Clearly there are many political issues and the prospect of rejoining the EU may seem long off. But, with the economy under-performing a movement to rejoin may come about quicker than expected.