Economies are constantly evolving. Industries which once employed thousands of people can later become uncompetitive and unprofitable. The UK has seen the rise and fall of many manufacturing industries. Industries such as cotton, wool, coal and ship-building were once key aspects of the UK economy, employing thousands of people in dense areas, but over time they lost their former dominance and now are just shadows of their former selves. 20 years ago, the record industry was very profitable, but in a short space of time, people stopped buying CDs and the record shop industry suffered dramatic fall. This industrial decline can enable the economy to progress and new innovation to come forward. But for those left behind – it can cause structural unemployment and stagnation.

Should we worry about declining industries? There are different approaches.

The UK coal industry used to employ over a million men in 1920. Today, the coal industry employs only a few thousand. On the one hand, this has enabled employment to shift to more productive industries, but there have also been short-term and medium-term costs of high rates of unemployment in these former coal industries.

Declining industries are an aspect of the free market. Unprofitability is a sign that resources should be moved to more profitable areas, where labour and resources can be used more efficiently. However, for a time period, there is likely to be market failure.

A declining industry has a very visible impact on the local community. People can see very obviously the potential for unemployment and declining communities. It is much harder to see the new jobs and new firms, which will take time. 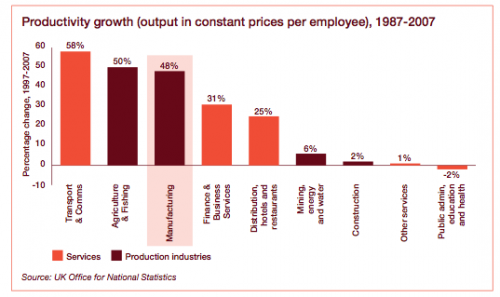 How to deal with industrial decline?

Industrial decline is an inevitable part of a modern economy. To hold back change – like the Luddites tried to do – would mean we could be stuck with manual weaving of the Nineteenth Century. The mirror image of industrial decline is growth in other sectors of the economy. However, rapid change can cause local problems – it is not necessarily a Pareto improvement, therefore there is a case for government intervention to manage decline and limit the scale of temporary problems associated with regional change.