Long-term economic forecasting can be very difficult. A well known joke by John Kenneth Galbraith is:

“The only function of economic forecasting is to make astrology look respectable.”

However, although there is some truth in this wisecrack, in the short term, we can be reasonably confident about predictions for inflation.

In particular, if we see a rise in input prices (raw materials), then there is a very strong correlation between these input prices and later rises in consumer price index.

The simple logic is that if firms see a rise in the costs of production, they will tend to pass these onto consumers in the form of higher prices.

It is possible, firms could try to absorb higher input prices with lower profit margins, but they are unlikely to do this.

Therefore, if we have some event which leads to a change in input prices, we can be fairly confident of predicting the inflationary impact over the next six months.

This kind of input price inflation (or cost-push inflation) could be due to:

The UK has recently experienced a sharp depreciation in the Pound of up to 15%. As manufacturers import a high percentage of raw materials, this will quickly feed through into higher factory gate prices and later consumer prices. 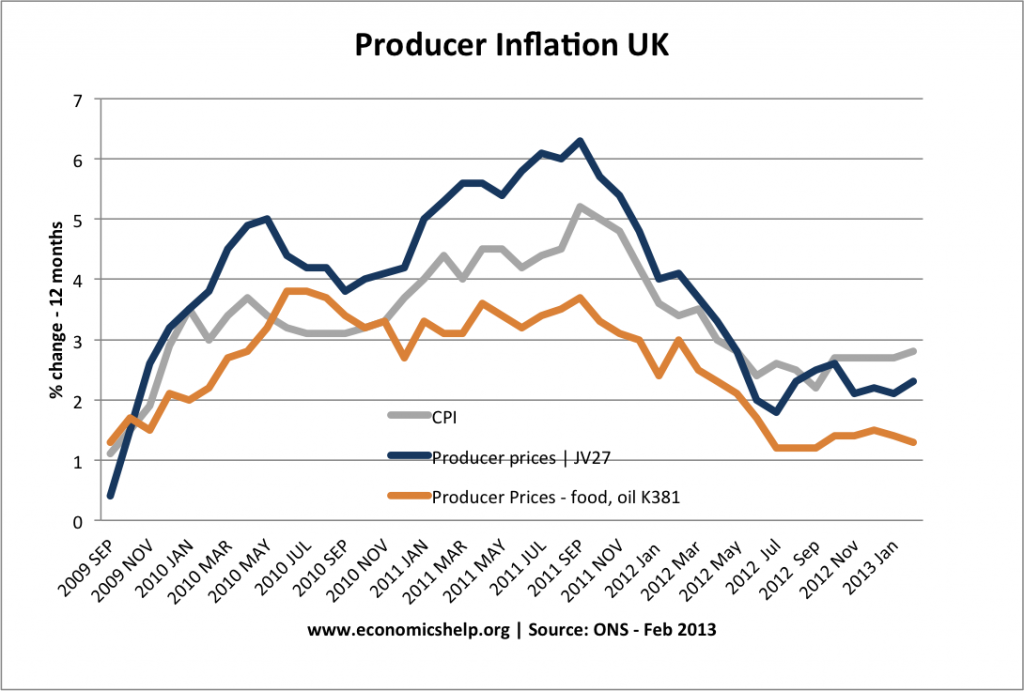 A previous example of how depreciation in the Pound caused inflation. Producer inflation increased in early 2011 causing inflation CPI to reach over 5%.

Producer prices are what we call a leading indicator. It is data which will gives an insight into future economic prices.

It is quite likely that in their next inflation prediction in November, they will increase their predictions for future inflation.

Why is inflation harder to predict in medium term?