Rising real wages means an increase in living standards and greater purchasing power of consumers. In the past decade, many economies such as US and UK have witnessed stagnant real wage growth. A rise in real wages would be a welcome boost to living standards.

Rising real wage will also enable an improvement in public finances. This is because higher real wages will lead to higher income tax receipts, higher VAT receipts and therefore enable a reduction in government borrowing.

At the current time (2017), UK growth could be curtailed by a fall in real wages (due to cost-push factors of depreciation) In this scenario, a rise in real wages would contribute to higher economic growth. Rising wages and growth may also lead to knock-on impacts of encouraging business investment to meet future demand.

Rising real wages usually corresponds to a fall in unemployment (at least demand-deficient unemployment) With positive wage growth and rising spending, it creates more demand in the economy and firms respond by employing more workers.

This suggests there can be a relationship between wages and unemployment. The original analysis suggested higher nominal wages leading to lower unemployment. 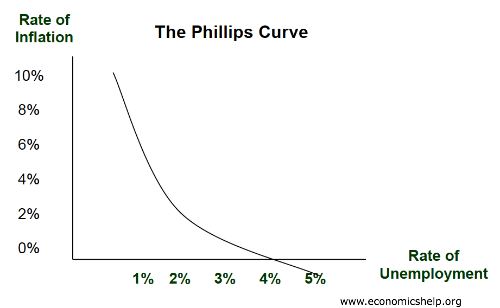 This was later developed to suggest a trade-off between inflation and unemployment.

See more on Phillips Curve and cases where the relationship can break down.

In other words, many workers benefit from rising real wages, but some lose out and don’t get a job.

It is debatable whether economies like US and UK have a realistic potential for real wage unemployment. In the 1970s, it was an issue – with rising wages partly caused by powerful unions. But, these days, unions are quite weak.

This kind of real wage increase is sustainable.

However, if productivity growth is stagnant (e.g. 0%) and real wages are rising 2-3%, then firms will be seeing rising costs of production. In this case, we will see inflationary pressures. Also, the countries exports will start to become uncompetitive.

In recent years, we have seen poor productivity growth and this is a major reason for low wage growth.

Rising real wages which arise from increased productivity are generally beneficial for the economy. They enable higher living standards, increased tax revenue – without potential costs of inflation and uncompetitiveness.

Real wage inflation only becomes a problem if it is financed by pushing up prices and diminishing firm profit margins. This kind of real wage inflation tends to be unsustainable and could lead to an inflationary boom and decline in competitiveness.

1 thought on “Does real wage inflation help the economy?”