Readers Question: Will interest rates rise? Some say yes, my investment analyst/advisor says no (“because the UK is largely living on credit and the government and bank of England do not want a repeat of 2008”)

Interest rates will rise when the Bank of England feel the economy has returned to a normal trend of economic growth and underlying inflation (ignoring cost-push factors) is predicted to rise above the government’s target of CPI 2%.

Given recent rises in US interest rates and a fall in UK unemployment to 4.7%, it is more likely interest rates will rise than in past several years.

But the first thing to mention is how often forecasts of rising interest rates have proved wrong in the past few years.

Each year, since 2009, interest rates have been forecast to rise in 12-18 months, but they never have. 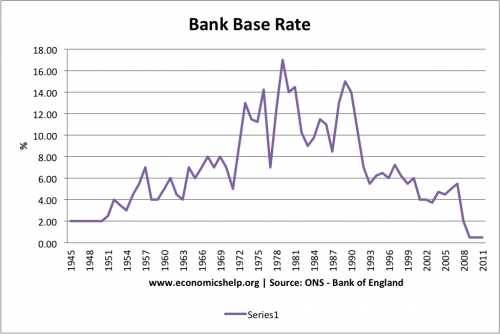 Interest rates have never been zero for this long in history. Even in the Great Depression, interest rates stayed at 2%

Why have interest rates stayed so low for so long?

Essentially, the economy has been stuck in below trend growth since 2009. The economy has not caught up with the lost capacity of 2009 recession. GDP statistics flatter the actual performance of the economy. If we look at GDP per Capita and average earnings, the economic performance appears even more sluggish.

In the past two years, average earnings have performed slightly better, but not much.

The UK saving ratio has fallen since 2010 and is forecast to fall further by 2019. This gives some credence to the view that there are similarities with 2007 – when households were stretched with many relying on credit. See: fall in UK savings rate

Prospects for rising in interest rates

It is true the UK has a fall in savings ratio, high levels of consumer debt and households are being squeezed by stagnant incomes and rising prices, but there are also many differences with the lead-up to 2008. There hasn’t been the same binge in mortgage lending, and rise in bank lending. Despite low-interest rates, it has been difficult to get finance and loans.

I don’t think the Bank of England will be increasing interest rates to deal with the boom in housing prices or boom in bank lending.

So when will interest rates rise?

If you’re uncertain about economic predictions, just looking at what happened last year, makes a reasonable guide to the future. In other words, the best guide to predicting interest rates for the next year is just choosing the figure of the current year. Interest rates are now entering their eighth year at close to zero.