An inflation target means the Central Bank has the objective to use monetary policy in order to keep inflation close to an agreed level (e.g. 2%)

If inflation is forecast to rise above the target, they are likely to increase interest rates to moderate demand and slow down inflationary pressures.

If the Central Bank is only given an inflation target, they should ignore other variables, such as economic growth and unemployment. However, in practice, most Central Banks are given a dual-target – a target for inflation, but also consideration for economic growth.

An inflation target means they will not target inflation indirectly. e.g. fixing currency or targeting money supply.  But, look at prospects for inflation and change interest rates accordingly.

Inflation Target in the UK 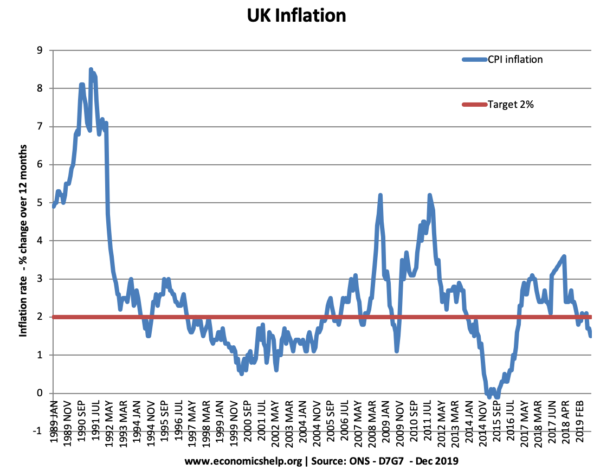 Since 1997, the UK has been a good example of inflation targeting.

The government set the inflation target of CPI 2% +/-1. This means the bank is committed to keeping inflation within the range of 1-3%.

Monetary policy is operated by the Monetary Policy Committee (MPC) which is part of an independent Bank of England. This means the government cannot interfere in Monetary policy decisions.

The MPC use interest rates to try and achieve this goal. In exceptional circumstances, they may also use unorthodox monetary policies such as quantitative easing.

It is hoped that having an inflation target will reduce inflation expectations and therefore make it easier to maintain low inflation.

If inflation is above the government’s target, the MPC will probably decide to increase interest rates. Higher interest rates increase the cost of borrowing and reduce consumer spending and investment. This should lead to slower growth in AD and lower inflation.

If inflation was below target and the rate of economic growth very low, the MPC would be likely to cut interest rates to try and stimulate AD.

Inflation Target in the US

In the US, the policy is slightly different because the Federal Reserve has two objectives. One is to target low inflation, the other is to maintain full employment. At the moment the Fed is cutting interest rates to try and avoid recession, they are not too worried if inflation increases.

Which target is more important inflation or economic growth?

This is an interesting question. The ECB emphasises low inflation. The logic for this is

It could be a mistake to only target inflation