Summary. A look at policies a country can consider to increase the value of a currency.

Readers Question: I was wondering, what are some of the policies and possibilities a country can use to increase the value of their currency? Specifically, countries who would be trying to “overthrow” the US dollar like China, India, Brazil, Russia etc.

To increase the value of their currency, countries could try several policies.

1. Sell foreign exchange assets and buy their own currency

China has over $1.4 trillion of US government bonds. If the Chinese sold these Treasury bills and brought back the proceeds to China, this would cause a depreciation in the dollar, and the Chinese Yuan would appreciate. (supply of dollars would rise, and demand for Chinese Yuan would increase) Because China has substantial dollar assets, they could cause a reasonably significant fall in the value of the dollar.

In fact, China could appreciate the value of their currency simply by not buying any more dollar assets. Currently, China has a large current account surplus with the US. This flow of money into China would usually cause an appreciation. However, China has deliberately decided to use its foreign currency earnings to buy US assets. They do this to keep the Yuan weaker and therefore keep their exports more competitive.

In the case of Russia and Brazil, they only have relatively limited dollar reserves. Therefore, there is only limited scope for selling dollars and buying their own currency.

At the moment, it is hard to find a country which wants to have a stronger exchange rate. For example, Switzerland was once seen as a ‘safe haven’ currency. This caused investors to buy Swiss Francs. However, the Swiss government and Central Bank were worried about the appreciation in the Swiss Franc causing problems for exporters. If a country gave a credible assurance that they were targeting a higher exchange rate, this might encourage speculators to move money into that country.

If inflation is relatively lower than competitors, then the countries goods will become more attractive and demand will rise. Lower inflation tends to increase the value of the currency in the long term. To reduce inflation, the government / Central bank can pursue tighter fiscal and monetary policy and also supply-side policies.

In the long term, a strong currency depends on economic fundamentals. To have a stronger exchange rate, countries will need a combination of low inflation, productivity growth, economic and political stability.

For example, if India increased interest rates, this might not be enough to cause an appreciation in the exchange rate. This is because, despite high-interest rates, investors would be concerned about the high inflation in the Indian economy.

Difficulties of influencing the exchange rate

It is worth mentioning that it can be difficult for many governments to influence the exchange rate. 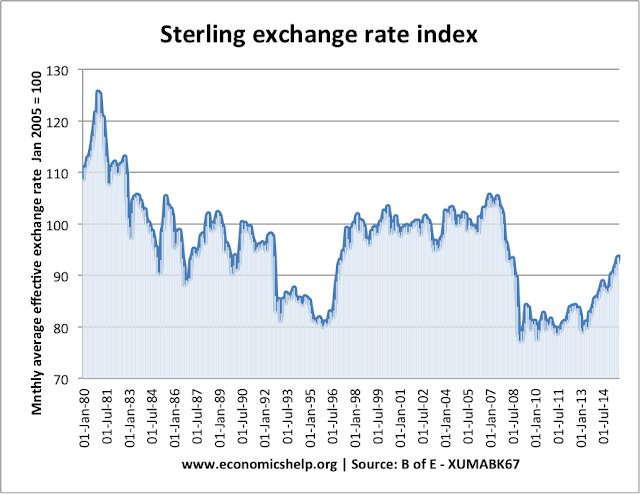 A strong currency is a mixed blessing. It makes imports cheaper and can improve living standards. However, it can also make exports less competitive and lead to lower economic growth. See: Impact of appreciation

15 thoughts on “How to increase the value of a currency”