Austerity measures have pushed the UK and European economies back into recession with rising unemployment. But, I often feel that austerity measures are actually quite popular with the electorate. It is true that in Europe recently there has been something of a backlash. The recession has been so severe, voters have started to vote against politicians promoting austerity. But, for a long time politicians promoting ‘austerity’ ‘belt-tightening’ ‘responsibility’ rarely lost votes or political support. 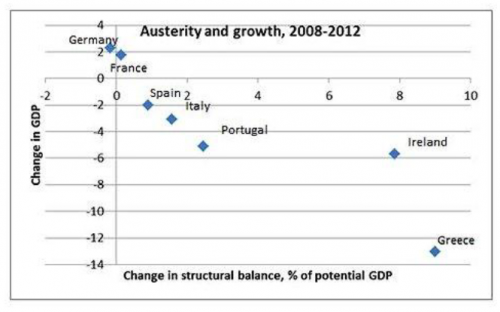 Austerity measures at the wrong time can create recession, unemployment and reduce prospects for the economy – so why is it so politically popular?

Paradox of Thrift. In a recession, instinctively people save more. The UK saving ratio shot up from 2% to 7%. If people are tightening their belt, the logical consequence is that people feel the government should be doing the same. The fact that higher saving in a recession makes things worse – is the unfortunate paradox.

Debt Seems A lot. If we have a personal £1,000 debt, we feel it is very significant. The sums involved in government debt are so large as to be incomprehensible. Headlines in the Daily Mail, such as ‘£15,000 debt per person give the impression, debt is completely unmanageable. There is part of us which likes to exaggerate how bad things are. (There is rarely a rational retrospective look into historical debt to GDP levels)

One of the biggest mistakes the coalition made on coming to power was emphasizing so frequently  how bad things in the economy were. They spoke so frequently about the unmanageble size of UK debt that people expected large spending cuts and job losses – This precipitated a collapse in confidence and lower economic growth.  But, this was probably good politics to repeatedly say what a bad situation we are in.

‘Debt Got is into this difficulty. It is very common to say hear ‘debt got us into this difficulty, so how is more debt going to help?’ A fairer representation of Keynesian economics is that the government is going to make use of surplus saving to create demand absent from the private sector. But, if you present it as more debt on top of (private sector debt) it creates a very different impression.

Managing Finances like a household. Mrs Thatcher touched a chord with voters when she talked about managing government spending like a grocer’s wife. People can relate to the principle of managing a budget. Why should we let government be irresponsible?

It is easy to forget most households take on a debt (mortgage) several times greater than their annual income. When I got a mortgage, my debt was 450% annual income, but I still tried to manage my budget. This is another paradox.

However, this shopkeeper’s analogy was a key factor in giving Mrs Thatcher the political will to slash the budget deficit in 1980. The fact it caused a very serious recession and mass unemployment ( 1981 recession), didn’t cost her the next election.

I feel that austerity measures always touch a chord with voters. Whatever the economics, austerity always seems to be politically popular.  This is a shame because it is unnecessary to experience a recession lasting four years.

4 thoughts on “Why Austerity is Politicaly Popular?”