Readers Question I’ve recently been looking up on the Eurozone financial crisis for random reasons and i don’t understand the statement in an FT article about what we must acknowledge in order to overcome the Eurozone problems. The statement goes ‘no country can be expected to generate huge primary surpluses for long periods for the benefit of foreign creditors’. Please can you help?!

Firstly, it is not an easy article – there is a lot of jargon! To quote:

“A fundamental shift of tack is required, towards an approach focused on avoiding systemic risk, restarting growth and restoring arithmetic credibility rather than simply staving off disaster”

To answer your question:

A primary budget surplus is the government budget balance excluding the cost of interest payments on government debt.

This graph showing changes in primary balances shows how countries in the Eurozone have pursued fiscal tightening (spending cuts and tax increases) to reduce their budget deficits. Excluding interest payments, many now have a primary budget surplus.

In the UK, bond yields on government debt are very low (a consequence of having own currency). However, in many Euro-zone economies, such as Italy, bond yields have been much higher. 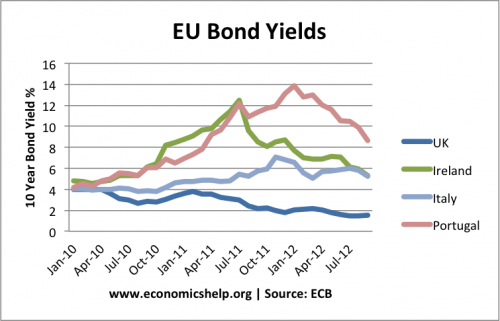 The consequence is that countries like Italy and Spain are paying a very substantial amount just on servicing their debt (paying the high interest rates to bond holders).

If Italy, could wave a magic wand and borrow at 0% – it wouldn’t have to pursue austerity measures, it could just see its debt reduce.

However, because Italy is in the Eurozone (and there are fears over liquidity of Eurozone bonds), interest rates have increased to over 5 or 6%. Therefore, Italy is paying nearly three times as much on debt interest as the UK.

One thing the article is suggesting is that the EU and ECB should commit itself more strongly to reducing bond yields for Italy and Spain. If bond yields fall, the cost of servicing debt falls. This helps reduce the actual budget deficit without damaging spending cuts.

Even though Italy has a primary budget surplus, they still are being asked to pursue austerity measures. Counties, like Italy and Spain are having to cut actual government spending (e.g. cutting infrastructure investment, wages) to try and reduce their budget deficits. But, these austerity measures are causing a second recession and falling GDP. The problem is that markets are very worried about this double dip recession in southern Europe – if GDP is falling, markets ask how are they going to generate tax revenue and reduce the debt to GDP burden?

Essentially, if Italy wasn’t in the Eurozone, but was outside like the UK – the Italian debt crisis would look very different. Bond yields would be much lower. They would not be ‘wasting’ so much money on debt interest payments. In theory, they could concentrate on increasing economic growth rather than pursuing austerity measures which harm economic growth.

If the UK were in the Euro.

Another way of looking at this issue is what would happen in the UK was in the Euro?

Firstly, we would see higher bond yields. UK bond yields would probably be like Italy and Spain (6% rather than 2%). If the UK is currently paying interest of £42bn on its government debt, with an interest rate of 6% it would be much higher (a simplistic view would be to say interest rate costs of £126bn) Furthermore, in the Euro, there would be even greater pressure to cut spending and reduce the budget deficit.

Can you imagine the UK economy having to cut spending by £84bn – just to pay the higher interest rate costs? £84bn would be ten times greater than any austerity the government have managed so far.

1 thought on “The Economic Cost of High Bond Yields”