This response is in contrast to countries like Spain and Ireland. In Ireland, the government implemented a very costly bank bailout – which in turn caused the Irish government to seek a bailout.

Yet, just five years after allowing banks to go under, Iceland is being rehabilitated into the international capital markets, with rating agencies upgrading Icelandic bonds from ‘junk’ status to BBB. (Guardian)

Iceland has succeeded in stabilising the macro economy, reducing the debt to GDP burden, and importantly has seen positive economic growth – helped by a substantial devaluation. The devaluation also helped to rebalance the economy and reduce the budget deficit.

The collapse of the bloated finance sector had another advantage. Iceland’s traditional exporters have now found they could employ graduates at reasonable salaries. Previously, graduates had been poached by banks with seemingly inexhaustible supplies of money. This has helped rebalancing the economy to the more ‘real’ sector. 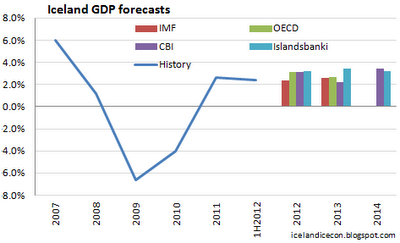 After experiencing 10 quarters of negative growth, the Icelandic economy has grown for the past two years at an average of 2.5%. Unemployment has fallen to 5% and confidence is returning.

The default is not without its costs. In the UK, the government were forced to bailout out savers who had savings in Icelandic banks. The sharp devalution has increased living costs (price of imports rise). Inflation in Iceland reached 10%  Also, those people who took out an index-linked mortgage  have seen their  mortgage debt become  worth much more than their house. (BBC on Iceland) Since the crisis, house prices fell by more than 30% in real terms, but prices have increased.

However, in a bid to minimise debt, in June 2010, the nation’s Supreme Court declared loans denominated in foreign currency to be illegal. This meant that those who had taken out foreign loans, only had to repay in terms of domestic Krona which was now worth a lot less.  This enabled consumers to erase debt equal to 13 percent of Iceland’s $14 billion economy. (bloomberg.com)

Iceland was even helped by the IMF who gave bailout funds without the usual austerity strictures. Nevertheless, despite avoiding harsh austerity measures, the government still cut spending and increased some taxes on the rich. This enabled the economy to reduce the budget deficit from 13.5% of GDP in 2009 to 2.5% in 2011. Iceland was predicted a primary budget surplus of 1.5% for 2012. Iceland’s actual deficit in 2013 is expected to be about 0.1% of GDP. An important reminder that the best way to reduce deficits is to make sure the economy recovers.

Iceland’s devaluation was sharp and painful, leading to higher prices, lower real incomes and the need to keep interest rates high. There has been no return to the affluence of previous years. But, given the bloated nature of the economy and banking system in 2008, it could have been much worse. The most important thing is that Iceland feels it is in control of its destiny. Yes, real incomes have fallen, but with positive growth and falling unemployment, there is a sense that the economy can be rebalanced and move forward without falling into a painful deflationary spiral of debt, austerity and internal devaluation.

Despite the relative success of Iceland’s recovery compared to Eurozone countries, some in the Icelandic government are pushing for early admittance into the Euro. This enthusiasm for a single currency is rather bizarre given the explicit dangers of tying yourself to a single currency in an area as large as the Eurozone. If Iceland had been a member of the Euro, there is no way unemployment would have fallen to 5%.

The only bitter taste in the mouth about the Icelandic experience is that it’s all very well for a small country to renege on foreign debts, loans and saving accounts. But, is this model applicable to other larger economies. If Ireland had allowed its banks to default, it would have been much harder to absorb all these losses throughout the European banking system.

However, it is another striking example of how having your own currency can help to overcome crisis and major imbalances quicker than if you are tied to a fixed exchange rate. If Iceland get a chance to vote on joining the Euro, they should not believe the old lie that boom and bust has finally been overcome.