House prices fall where there is a decline in demand and/or excess supply. The main factors that cause a fall in house prices involve:

Interest rates are very significant to the housing market. An increase in interest rates will increase the cost of variable mortgage interest payments. Those on a fixed mortgage may be insulated from higher mortgage payments in the short-term, but over time – even fixed-rate mortgages – will become more expensive.

Interest rates are also very important for buy to let investors. Low-interest rates mean that mortgage payments will be cheaper than rentable income. So a rise in interest rates will provide an incentive to sell.

In a recession, unemployment rises, incomes fall and consumers lack the confidence to make a big investment in the housing market. There is a strong correlation between a period of recession and falling housing prices. 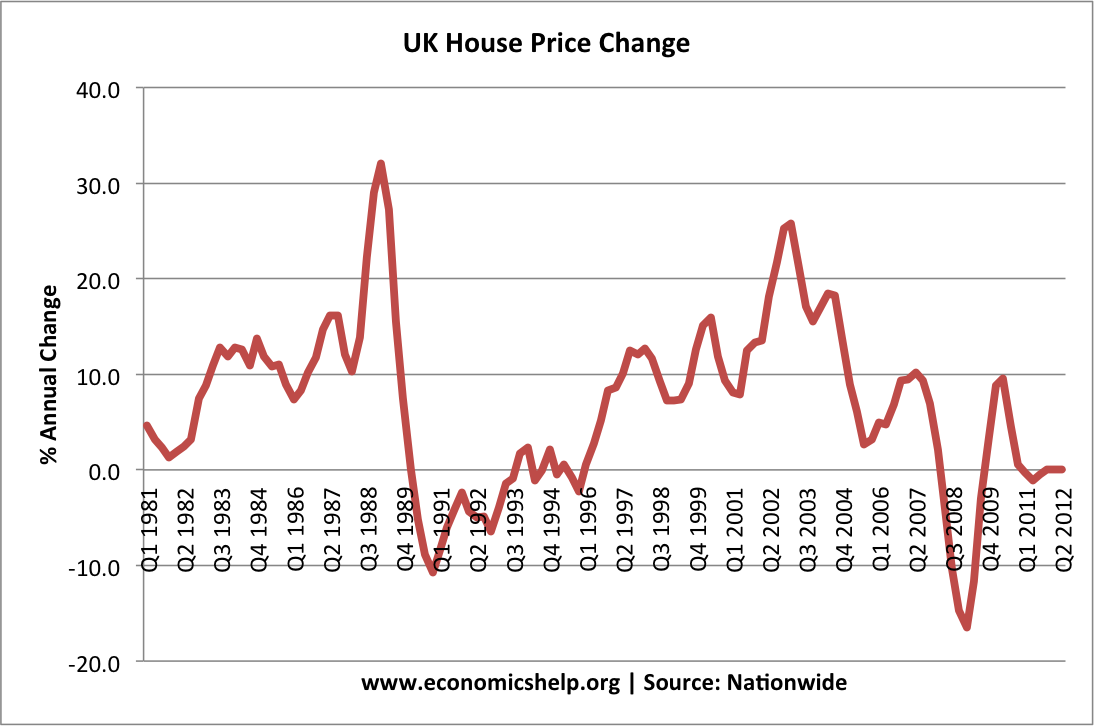 The 2009 recession had an additional element – banks were short of liquidity and so cut back on bank lending. It became harder to get a mortgage and even though homeowners wished to take out a mortgage and low-interest rates, banks were unwilling to lend and tightened their lending criteria significantly

A small change in stamp duty or other forms of tax on homes would increase the cost of buying a house and making it less attractive to buy. There are proposals to increase taxes on second homes – making the buy to let property less attractive.

If there was a boom in home building, then any fall in demand would be liable to cause a significant fall in house prices.

It is worth contrasting the experience of the UK and Ireland after the financial crash of 2008. Post-2008, the fall in UK house prices (20%) was quite mild compared to other countries.

For example, Ireland saw a real collapse in house prices (-50%). The Irish house price collapse follows a similar pattern to the UK – banking crisis causing a shortage of finance. Recession causing unemployment and falling demand. However, in addition, Ireland had a real boom in house building in the preceding years. Therefore, with falling demand, Ireland, Spain and the US have had a bigger excess of supply. Therefore, house prices fell more in these countries, than in the UK.

UK house prices have been insulated by this shortage of supply – which has kept prices higher than if supply was more elastic. If we look at the graph of UK house price affordability. There has only been a very small improvement in affordability of houses. The ratio of house price to incomes is still greater than early 1990s, suggesting certain factors have prevented a bigger than expected fall in UK house prices.

A fall in the number of households would affect demand. This may occur due to fall in population or rise in the average size of a household.

For a property investor, they will look closely at the yield on renting a property compared to other forms of investment. If interest rates on other assets rise relative to property yields it will become more attractive to buy other assets and less housing.

2 thoughts on “Cause of falling house prices”