A mansion tax (or property tax) would be an annual progressive charged that would be paid by homeowners. It is effectively a tax on housing wealth. The Labour party has suggested implementing a property tax on homes worth over £2 million. Exact details have not been confirmed, but the suggestion is that it will be a progressive tax meaning the greater the value of the homes, the more the annual tax will be.

In 2010, the Lib Dems proposed a mansion tax based on 1% of a property’s value above £2m. This threshold would also rise in line with increasing house prices. In this case a property worth £2.5 million would pay an annual tax of £5,000 a year.

Proponents of the tax argue that it will help raise revenue, cool a booming property market and help to redistribute the great increase in wealth inequality that we have seen within the UK.

Critics argue that it could lead to people who are property rich, but income poor, struggling to pay the annual charge.

Benefits of a Mansion Tax

A report by the ONS shows that there is considerable wealth inequality within the UK.

Inequality of wealth by component

A mansion tax would begin to redistribute the great wealth inequality within the UK.

It is argued that people with a home worth £2 million may have very little income and be quite poor, especially in London where property prices are very high. But, wealth does affect disposable income. Pensioners who own a house will save considerably on rent during their retirement. By comparison an old person who was never able to buy, will face rents taking a considerable part of their income. I don’t think there are too many poverty stricken multi-millionaires.

Why shouldn’t wealth be taxed? We tax everyday goods (VAT), income, and profit, but there is always a reluctance to tax wealth. Raising money from a wealth tax will help reduce other taxes which will benefit everyone in society.

Discourages purchase of second homes. The UK faces a real shortage of housing, this is pushing up house prices making them unaffordable for a younger generation. 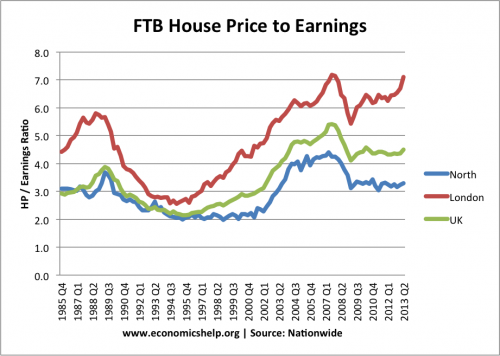 Ratio of house prices to earnings for first time buyers are near record levels, especially in London.

A mansion tax would be a disincentive for the wealthy to buy second homes in the UK. This would reduce the overall rise in house prices, helping to keep prices lower than they would have been. (this is not to say a mansion tax will solve the problem of UK house prices, but it is a small contribution) Famous celebrities have already threatened not to move to the UK. But, the benefit of that is that it reduces demand for UK housing, leaving more supply for other people. Do we want London housing bought up by wealthy foreigners, when local workers are struggling to live there?

Problems of a mansion tax

A tax on property doesn’t distinguish between buy to let landlords and those who have seen their property rise in value during their lifetime. There can be a big difference in disposable income of people who are living in houses worth £2 million plus. There is also a big difference between someone who has just bought a house and paying high mortgage payments and someone who has already paid off their mortgage.

A mansion tax will not solve the housing crisis. The tax is unlikely to deter buyers in London, and will only make a minimal difference to reducing the price of affordable housing in the UK

The IFS argue that there is an underlying logic to a property tax, but it would be more efficient to just update council tax bands to take account of changing property values.

Some argue the mansion tax would discourage home-building because of the reduced demand. I am very sceptical of this argument. Building new homes will still be very profitable – Homes are worth more than the cost of building, even if prices fell 5%. It is more likely that it would encourage builders to concentrate on building affordable homes rather than £2million plus houses.

On a personal note, I’m surprised at the widespread sympathy shown to ‘millionaires’ in the British press. If you have a house worth £2 million – you are wealthy, and I think it is quite reasonable they should pay. I struggle to gain too much natural sympathy for the ‘hard pressed – multimillionaires’. So you have to bear in mind, I’m very biased on this argument (as usual, my readers may add!)

The proposed tax may raise £1.4 billion. The UK is spending £23 billion on housing benefits to help nearly 5 million with the costs of affordable housing. If I owned a house worth more than £2 million I would think it very fair to pay for the privilege.

One of the major problems in the UK is how the housing market has created vast inequality between the homeowning class and the non-homeowning class. The only real way onto the property market for many is to inherit, borrow from parents or have a very high income. I would like to see a mansion tax, with the proceeds used to subsidise the building of affordable homes.

I don’t think the mansion tax is perfect nor will it ‘solve’ the UK housing crisis. But, it is a start. There is also a good case for integrating into an existing tax like council tax.

One thing is that the mansion tax could be developed to charge higher rates to those who have multiple properties and a very high tax rate for unoccupied housing. Also, I don’t see why the limit has to be £2million. It could be lower, and there should be much more aggressive taxing of any home unoccupied for a long time.