There are a raft of different methods of calculating government debt. It can be a little bewildering (even for an economics teacher!). I have tried to define the key terms in a simple format and also a more detailed and precise way. This only focuses on the UK.

US Federal Deficit as % of GDP

Debts Not Related to Government Debt

Public Sector Net Debt – This is statistic most widely used for stating how much the public sector (central, local government and corporations) owe to the private sector.

The Public Sector Net Cash Requirement indicates the extent to which the public sector borrows from other sectors of the economy and overseas to finance the balance of expenditure and receipts arising from its various activities. The flows which count towards the PSNCR are measured on a cash basis (with a minor exception of interest on National Savings instruments). 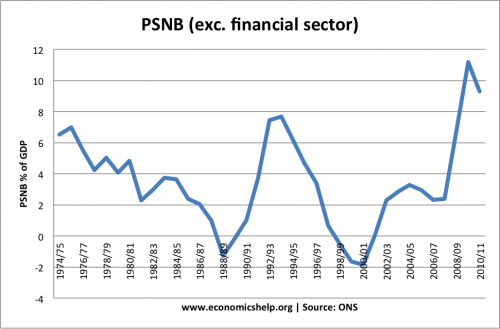 Move away from Cash accounting to National Accounts framework
21. The PSBR was a cash concept unique to the UK, although it had similarities to an International Monetary Fund measure.  With the introduction of the new Public Finances framework in 1998, the PSBR played a less important role as the Government’s preferred measure moved away from the cash accounting basis and onto the accruals basis consistent with National Accounts framework. (net debt) The PSBR continued to be produced but was renamed the Public Sector Net Cash Requirement (PSNCR) to avoid confusion with the Public Sector Net Borrowing measure.  The PSNCR definition and measurement are the joint responsibility of ONS and HM Treasury.

The 1992 Maastricht Treaty on European Union obliged EU member states to avoid excessive government debt levels.  The Protocol on Excessive Deficit Procedure (EDP), an annex to the Treaty, defines this as 60 per cent of GDP.

The debt measure used is General Government Gross Debt (GGGD).  This differs from the UK fiscal measure, PSND, in two important respects.  The first is the sectoral boundary, being defined as General Government it excludes the net debt position of public corporations, which are included in the public sector. The second is that is measures gross liabilities and does not net off liquid assets.