A recession is a period of negative economic growth – a fall in output accompanied by rising unemployment. Recessions tend to occur in cycles of 8-10 years, though there is no hard and fast rule. Attempting to predict a recession by the number of years is not guaranteed to work. 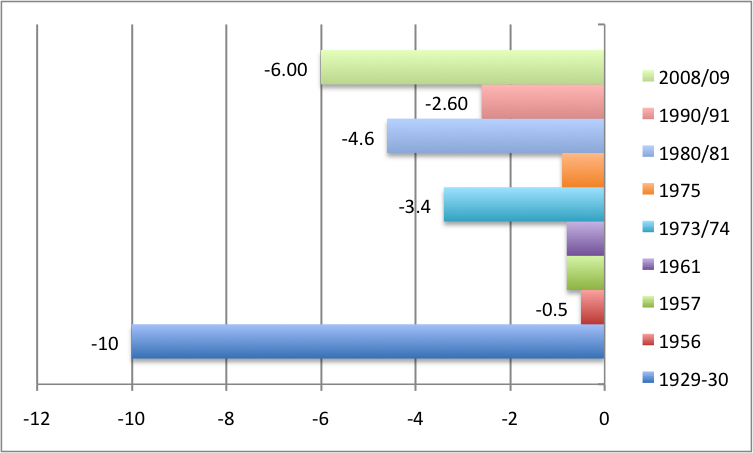 The last recession 2008-09 occurred after 16 years of economic growth and some claims that we were seeing the end of the trade cycle. The recession of 2008 was unexpected because economists placed less emphasis on micro-issues of credit growth and sub-prime mortgages.

Recessions can also be caused by a rise in costs (short-run aggregate supply SRAS shifting to the left). For example, in 1974, a rapid rise in oil prices increased costs for firms, led to a fall in disposable income and led to the steep recession of 1974.

In practice, recessions are usually caused by a combination of several factors. For example, in 1991, the UK had high inflation and high-interest rates. The high-interest rates made mortgages expensive, causing a fall in house prices. High borrowing costs, combined with falling house prices contributed to fall in consumer spending – which led to fall in confidence. In a recession, we tend to see negative multiplier effects and a negative feedback loop so several factors combine.

What could cause the next recession?

The US president has threatened to raise tariffs on countries which have a trade surplus with the US. When the US has raised tariffs, this has led to retaliation. Rising tariffs lead to a loss of economic welfare, higher prices for consumers and a decline in economic efficiency. However, on its own, a rise in tariffs is unlikely to cause a recession. Exports only account for 16% of US economy and although tariffs create economic inefficiency and some structural unemployment, it is not sufficient to cause a large scale fall in aggregate demand.

See: Does a trade war cause a recession?

Also, some economies are more susceptible to a trade war than others. The US economy has a relatively low % of GDP devoted to exports.

However, south-east Asian economies such as China, Taiwan and Korea have relied on export growth for a larger proportion of their economic growth. A tariff war would hit their export industries. If these economies have other weaknesses – such as an over-reliance on debt, then the trade war could be a trigger for cutting back on investment and could lead to a global recession.

If the world economy does go into recession, it creates political pressure to respond with tariffs – exacerbating the problem.

A decade of very low interest rates has encouraged consumers and business to take on more debt. In the climate of low-interest rates, it has been profitable to borrow at low-interest rates. The Minsky hypothesis suggests in periods of growth and low-interest rates, lending grows too quickly, making individuals sensitive to a later rise in rates and change perception. This causes a cut back on spending.

In the UK, households have responded to a period of stagnant real wages by increasing consumer debt to record levels.

The ONS said households took out nearly £80bn in loans in 2017, the most in a decade. But they deposited just £37bn with UK banks. The deficit amongst households stands at £25bn or 1.2% of GDP. This means UK consumers are vulnerable to small triggers, such as higher interest rates, rising oil prices, increased cost of living or a decline in confidence. (Source: Guardian)

Firstly interest rates around the world are generally low. In the EU and UK, inflation is low and growth modest. In this situation, it is hard to see any rapid increase in interest rates in the EU. Only the US has modestly increased interest rates – in response to a strong economy. The US tax cut of 2018 has had an expansionary impact – it has increased the budget deficit during a period of growth. This stimulus combined with relatively bullish consumer spending could cause inflationary pressures. Even a modest rise in interest rates could have a large deflationary impact – consumers and business have increased debt levels – they have become used to ultra-low rates so are more sensitive to interest rates than in the past. The fear is that a small interest rate increase could tip sentiment and discourage spending and investment.

Predicting a recession is not an easy task. It is certainly possible to look at the various headwinds affecting the global economy and see how the world economy could enter recession by 2020. It would be a good bet, just going by the length of time since the last recession. The irony is that high levels of unsustainable debt which caused 2008 recession are still there – if not quite as bad, as sub-prime mortgage loans, both consumers and corporations have high levels of debt which could prove unsustainable.

1 thought on “What could cause the next recession?”