To reduce the value of a currency there are a few policies the government could adopt.

Cutting interest rates is the most direct policy for reducing the value of a currency. If the UK cut interest rates, then investors would be less likely to want to save in UK banks. This is because they get lower rates of return. Therefore, investors may move money from UK banks to US banks (this is known as ‘hot money flows‘.) Moving savings to the US will involve selling Pounds and buying dollars and this would lead to a fall in the value of the Pound. 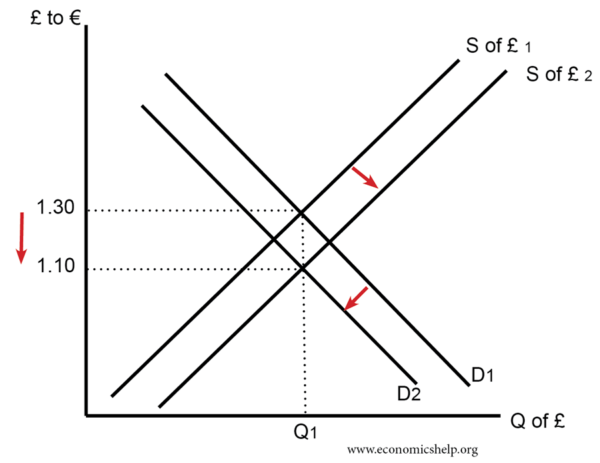 Lower interest rates cause an increased supply of £ and fall in demand, leading to a lower value.

Interest rates cuts would also stimulate borrowing and investment, leading to higher economic growth and inflation. If interest rate cuts cause an uptick in inflation, this could be another factor which causes a fall in the value of the currency.

The problem with cutting interest rates is that it could lead to inflation and this is associated with several costs. If the government is seeking to reduce the value of the currency to improve competitiveness, then higher inflation would outweigh the improvement in competitiveness.

If the government cut tax then consumers may respond by increasing spending. This would lead to higher economic growth and a rise in inflation. Higher inflation tends to reduce the value of the currency because goods become less competitive and so there is a relative fall in demand. For example, if the UK pursued higher growth and experienced demand-pull inflation, then UK goods would be more expensive than EU and US goods, leading to less demand.

The problem is that reducing the value of the currency by causing inflation rather defeats the point of the exercise. There will be little boost to domestic industry if the currency falls in value, but they also experience higher inflation.

Selling reserves of currency on the foreign exchange market

If the UK government had reserves of Pound Sterling it could sell these reserves on the foreign exchange markets and buy currency such as the Euro and dollar. Ceteris paribus, this would have the effect of reducing the value of the currency. It would depend on how much currency reserves the government had and underlying market conditions.

If the market thought the Pound was undervalued, then markets may happily buy sterling and then push the value back up.

A good example of a country effectively keeping its currency undervalued is China. In the past, China has experienced a large current account surplus with the US. China has been exporting goods. Usually, this strong export demand and current account surplus would cause an appreciation in the Chinese currency. However, there was a conscious decision by China to use its foreign currency earnings to buy US bonds and US assets. By intervening in bond markets, China was selling its surplus currency and buying dollar assets. This kept the Chinese currency lower than it would be in a free market. The Chinese government was motivated by a desire to keep exports competitive and a growing economy.

1 thought on “How to reduce value of a currency”