Readers Question: How can a developing country grow without inflation?

Economic growth can lead to inflation, for example, if demand rises faster than productive capacity, then we will see rising prices.

However, economic growth is compatible with low inflation, and developing economies which can increase productive capacity and general efficiency can see rising living standards without excessive inflation.

If a country can ensure AS (productive capacity of the economy) increases to meet with demand, then inflation should remain low.

However, in this situation, we get a rise in aggregate demand, but there is limited spare capacity. Therefore as demand rises, firms respond to the shortage of supply by pushing up prices and so this kind of economic growth does lead to inflation.

Developing economies may also be likely to experience cost-push inflation. This is not  due to excess demand, but a rise in costs, leading to higher prices. For example, cost push inflation could be caused by:

Policies for a developing economy to pursue low inflationary growth

1. Demand side policies.  A developing economy could use monetary and fiscal policy to prevent excess growth in aggregate demand. If economic growth is predicted to be too fast, the Central bank (or government) could raise interest rates. In theory, higher interest rates should reduce the growth of demand – e.g. higher borrowing costs). If successful, there is a reduction in the rate of economic growth which will keep inflation low.

3. Supply side policies. For developing economies, supply side policies may play a greater role in preventing inflationary growth. For example, investment in infrastructure can help avoid bottlenecks, which leads to higher prices.

4. Improving supply of educated labour. Many developing countries have large agricultural sectors, which are relatively inefficient. This gives scope for economic growth without inflation. For example, China benefited from large supply of workers leaving rural areas to work in industrial areas. This meant that as Chinese industries expanded, wages stayed low, helping inflation to remain low. If developing economies enable greater labour mobility and improved labour capital, then the supply of labour can keep up with expanding production and expansion. A better educated workforce will enable the economy to employ domestic workers, rather than have to import more expensive foreign labour.

5. New technology / improved working practises. The best way to have economic growth and low inflation is to adopt new technology – which increases productivity. This means higher output for lower cost and lower prices. For example, improved technology in new industries and agriculture could help the productivity of developing economies to catch up with developed economies. 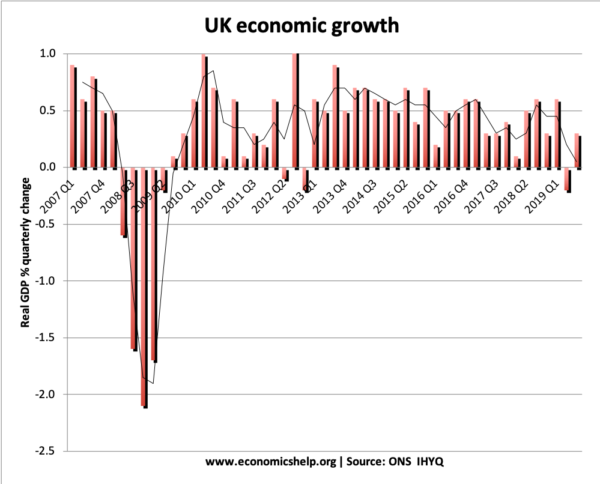 Post 2008, the UK had low inflation (apart from some temporary cost-push inflation). Growth was very low and global inflation was also low.

Developing economies have the potential to have economic growth whilst keeping inflation low. Economies like China have been relatively successful in this regard. If they can adopt improved technology and better working practises, then growth will not cause inflation. However, the Chinese growth shows that if it becomes too rapid, leading to a property bubble, then there is an increasing risk of inflation, which may require demand side policies to limit growth.

Developing economies can also make use of various supply side policies to help increase productivity and avoid supply bottlenecks which cause inflation.

Finally, sometimes inflation in developing economies is due to external crisis, such as rapid devaluation, or even governments printing money in response to economic shock (e.g. Zimbabwe) Therefore, it is necessary to avoid these potential inflationary shocks.

1 thought on “How can we have economic growth without inflation?”