Demand side policies aim to increase aggregate demand (AD). This needs to be done during a recession or a period of below-trend growth. If there is spare capacity (negative output gap) then demand-side policies can play a role in increasing the rate of economic growth. However, if the economy is already close to full capacity (trend rate of growth) a further increase in AD will mainly cause inflation.

In this case, the economy at Y1 has spare capacity. Therefore an increase in AD leads to a rise in real GDP.

More detail on the effect of lower interest rates.

Lower interest rates may not always boost spending. In a liquidity trap, lower interest rates may not increase spending because people are trying to pay back debts. In 2009, UK interest rates were cut to 0.5%, but spending remained subdued. Banks were unwilling to lend because of liquidity shortages. Therefore, although in theory, it was cheap to borrow, it was hard to actually create credit. Therefore, this shows monetary policy can be ineffective in boosting economic growth

In a liquidity trap, where lower interest rates fail to boost demand, the Central Bank may need to pursue more unconventional types of monetary policy. Quantitative easing involves increasing the money supply and buying bonds to keep bond rates low. The hope is that the increase in the money supply and lower interest rates will boost investment and economic activity. The fear is that increasing the money supply could cause inflation. Though evidence from 2009-12 suggests that the inflationary impact was minimal. Without quantitative easing, the recession was likely to be deeper, though QE alone failed to return the economy back to a normal growth projection.

However, if the economy sees a rapid fall in private spending, and a rise in the saving ratio, expansionary fiscal policy can help provide a boost to demand in the economy without causing crowding out.

The aim of expansionary fiscal policy is for the government to offset the fall in private sector spending. Similarly, during a period of economic expansion, the government may need to do the opposite of higher taxes and lower spending to create a budget surplus.

For countries stuck in a fixed exchange rate. Devaluation can help restore competitiveness and boost domestic demand. A fall in the exchange rate makes exports cheaper and imports more expensive.

For example, Argentina and Iceland both had rapid devaluations, which in the medium term helped their economic recovery. The UK also benefited from leaving the exchange rate mechanism in 1992.

The disadvantage of devaluation is that it can lead to short-term economic pain. Rising import prices increase inflation and reduce standards of living. Devaluation is also seen as a sign of economic and political weakness.

In the case of Eurozone countries, devaluation is needed (see: competitiveness in Europe), but it is much harder to devalue and leave the exchange rate because of the likelihood of capital flight.

Limitations of demand side policies

Demand-side policies cannot increase the rate of growth above the long-run trend rate without causing an unsustainable boom and bust.

For example, in 1972, the UK chancellor, Anthony Barber announced a ‘dash for growth’. Taxes were cut against a backdrop of rising house prices and inflation. This led to the Barber boom – rapid economic growth. However, it also caused a spike in inflation, and the growth proved unsustainable. 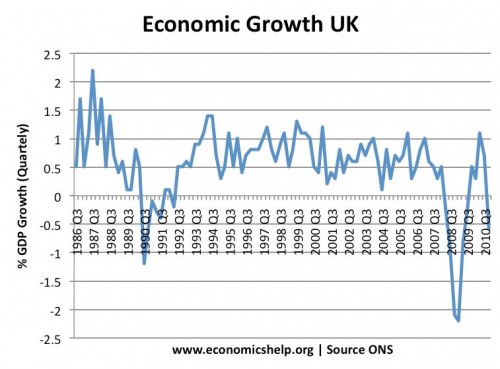 In some cases, demand-side policies need to be used to limit the growth of aggregate demand. It is necessary to avoid an economic boom, where growth proves unsustainable and inflationary. Managing AD to avoid boom and bust cycles can help provide a longer period of economic expansion.

The alternative strategy for improving economic growth is to use supply-side policies. These attempt to increase productivity and efficiency of the economy.

Lower Income Taxes. It is argued lower income tax can boost the incentive to work and increase labour supply. It is possible, if income taxes were excessive, then cutting them may encourage people to work more. However, this argument is often exaggerated. Reducing the basic rate of income tax from 23% to 22% would have a very minimal impact on labour supply. With a tax cut, there is both an income and substitution effect. The income effect states that higher taxes make people work longer hours to achieve their target income. (economics of tax cuts)

Better Union relationships. In the 1970s, the UK economy suffered because of poor industrial relations. There were frequent strikes which stopped production. With an adversarial attitude, it was difficult to promote more labour efficient production processes. Reducing the power of trades unions can help to improve labour productivity.

8 thoughts on “Policies for Economic Growth”