A possible unit 4 A Level question this summer could be:

Discuss the impact of a fall in public sector investment on the UK economy?

It means the government is spending less on capital investment projects such as new schools, new roads and other infrastructure investment.

That is quite a significant fall. With a fall in government investment, the first impact will be to reduce aggregate demand, lower economic growth and lead to higher unemployment.

Furthermore, given the weakness of other areas of the economy, this fall in government spending will lead to a significant fall in AD. If the economy was in robust shape with growing private sector demand and a strong export sector, this fall in public sector spending would not be so serious. But, the UK economy remains in a double dip recession with the uncertainty of the Euro crisis discouraging private sector investment.

One benefit of cutting public sector investment is that it will help reduce government borrowing. In the UK borrowing is forecast to be £123bn in 2011-12. Therefore, without a plan to reduce government spending and deficit, we may see a rise in bond yields as markets are concerned about the rise in government debt. An increase in interest rates would be very damaging for the UK economy given the levels of household debt and fragile nature of spending.

However, it is debatable whether interest rates would actually rise if the government invested an extra £30bn. Interest rates have fallen since 2008 because there has been a rise in private sector saving and demand for buying secure bonds. The interest rate on long term index-linked yields is low at 0.5%. This suggests public sector investment could be financed for a very low annual interest payment.

Also, the continued rise in the savings ratio shows that we are in a liquidity trap. Despite ultra-low interest rates, consumers are wanting to save and repay debt. Cuts in government spending have not led to improvements in public sector investment. Therefore, this suggests that the fall in public sector investment has contributed to the recent double dip recession. This rise in private sector saving suggests, there should be strong demand for government bonds, illustrated by low interest rates. Therefore, the government can afford to be patient in reducing government debt in the short term. 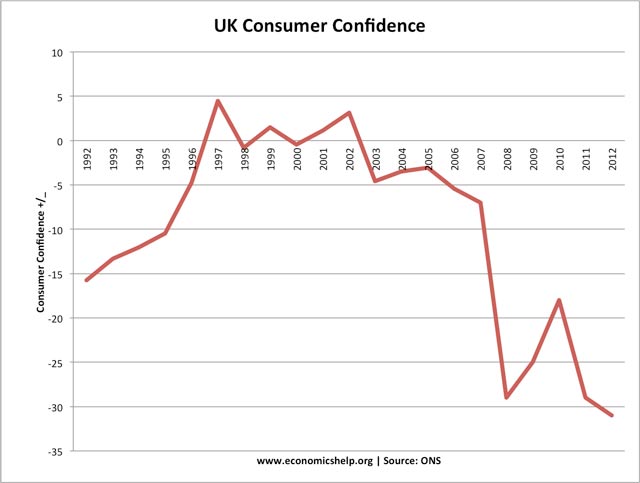 It was hoped that spending cuts would improve ‘confidence’ But, actually, the opposite happened. 2010, saw a slide in consumer confidence to the lowest levels. Stats for 2012 (March 2012).

This suggests government spending cuts have contributed to a fall in consumer confidence.

Furthermore, as well as demand side factors, it is important to consider the impact on long term productive capacity. There are many infrastructure projects which are not profitable for the private sector, but necessary for the long-term future of the economy. For example, overcrowding at Heathrow and on British roads is hampering Britain’s economy and putting off inward-investment. Without forward thinking investment, the economy will lag behind in the long term.

In conclusion, the cut in public sector investment threatens both the demand side and supply side of the economy. Cuts in investment have been a significant factor in keeping the UK economy in recession. Markets are less concerned about short term deficit reduction. More important is the long-term prospects for economic growth and the long-term structural deficit.

5 thoughts on “Impact of a Fall in Public Sector Investment”