A recession (fall in national income) will typically be characterised by high unemployment, falling average incomes, increased inequality and higher government borrowing. The impact of a recession depends on how long it lasts and the depth of the fall in output.

The main costs of a recession will be:

Who is most affected by a recession?

The worst affected will be those who lose their job or see their hours/self-employed income dramatically fall.

It also depends on the type of recession. The 2009 recession hit the financial sector the hardest. Many highly-paid ‘white-collar’ workers lost their jobs. Banks saw large-scale losses and falls in profit. It hit the housing sector very hard. The 2020 recession will be different. It will particularly affect low-income workers in the leisure and tourism sector – which will be devastated by the Coronavirus. It will also depend on whether the worker can work from home (writer) or has a job in the physical economy which will suffer more. (e.g. selling coffee). The effect will also depend on the extent of government support and whether people are entitled to benefits/rent relief.

A fall in economic output will cause a rise in unemployment. This is because:

The unemployment figures may under-estimate the true level of unemployment. For example, in a recession the self-employed may see a dramatic fall in income, but still not be classed as unemployed. 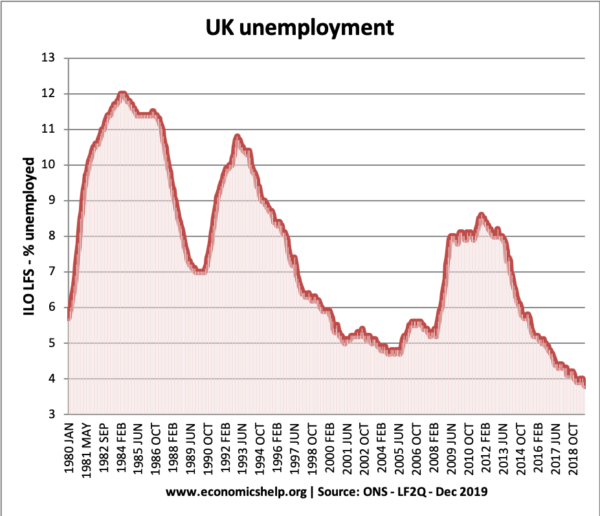 In the great depression, where there was a rapid fall in GDP, unemployment rose from 0% to 25% within three years.

In a recession, firms will also try to reduce costs by keeping wages low. Some workers (especially temporary workers without contracts may see wage cuts) This was a key feature of the 2008-12 recession, also aggravated by rising costs of living (e.g. higher taxes/oil prices) In 2020, at least cost-push inflation will be low – helped by falling oil prices and commodities.

Another cause of lower wages is under-employment. Some workers may keep their job, but see their hours cut. Rather than working full time, they become part-time workers (e.g. 20 hours a week). This means that the rise in unemployment may be muted, but many workers see substantial falls in effective income.

The self-employed are particularly vulnerable to recession. In an economic downturn, the self-employed may see a cash-flow shortage very quickly and struggle to make ends meet.

Governments will see a fall in tax revenue as a result of a recession.

Because of falling tax revenues and rising welfare payments (automatic fiscal stabilisers), a recession tends to cause an increase in the budget deficit and total government debt. 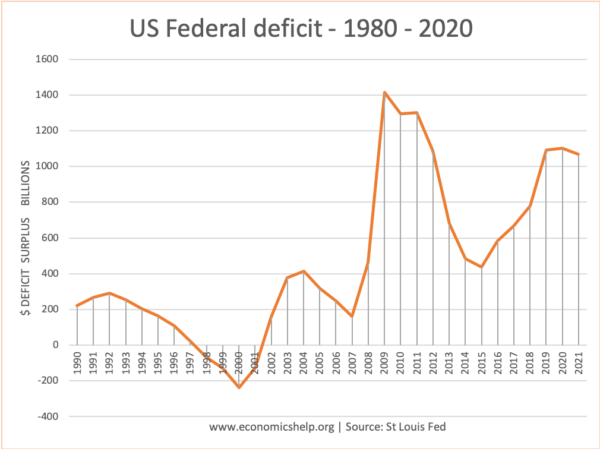 US budget deficit rose sharply after the recession of 2008/09. Note, the forecast for 2021 is wrong. Borrowing in 2021 in the US will surge because of the impact of Coronavirus and impending recession.

Many countries saw a sharp rise in the budget deficit post-2008 credit crunch because they relied on tax revenues from property and the finance sector. The fall in the property market hit tax revenues harder. VAT receipts tend to be less cyclical.

A budget deficit may also increase because the government decide to pursue expansionary fiscal policy and attempt to stimulate economic activity. FOr example, in 2010, the UK government cut VAT.

In a global recession, we tend to get a fall in oil prices because demand falls. The 2020 Coronavirus caused a sharp drop in oil prices and also a dramatic fall in share prices. It is an indication of the extent to which analysts expect the recession to hurt. Falling asset prices contribute to the downward spiral in the economy. Falling house prices create a negative wealth effect, reducing confidence and causing further falls in spending. We are likely to see a drop in house prices in 2020.

It is possible bond yields may rise if markets fear the recession will cause very serious problems for the government and liquidity shortage. For example, Italian bond yields have started to rise in 2020 because of real concerns about the collapse in the Italian economy.  A lot will depend on the reaction of the ECB and whether they will create money to provide liquidity.

See Impact of recession on trend rate of economic growth

The unemployed lose the opportunity to gain skills and on-the-job training. Long-term unemployment can make it harder for the worker to gain a job in the future; it can even cause people to give up and drop out of the labour market completely.

Unemployment and recession can also cause a rise in social/health problems such as depression and suicide.

Firms will see a fall in demand and lower profits. Some firms may start to make a loss and go bankrupt. This may be due to fundamental inefficiency but also firms may go out of business purely because of the cyclical factors and an inability to borrow sufficient firms to see the end of the recession. A recession will hit some firms more than others. In a recession, there is a large fall in demand for luxury goods (foreign holidays) top-end sports cars and so these firms will be more vulnerable.

If a company has large reserves then it will be able to ride out the recession even if it makes a temporary loss. A recession may cause a firm to pursue price wars and cost-cutting.

Are there any potential positive effects of a recession?

3 thoughts on “Impact of economic recession”