A few years ago, I looked at the arguments for and against a tax on ‘fatty foods‘. Generally, I supported the idea of a tax on unhealthy foods because it is a way to price the full social cost of the good. It is an example of a Pigovian tax. A tax which internalises the external cost of the good.  Recently, the Academy of Medical Royal Colleges has produced a report stating 10 factors that could help reduce the UK’s obesity epidemic. One of these is an experimental 20% tax on sugary soft drinks.

A new study claims a 20 per cent tax on sugary drinks would reduce the number of obese adults in the UK by 180,000, bring in £276m to the Treasury and save the NHS millions.

The logic behind the new tax.

Costs of obesity to individuals 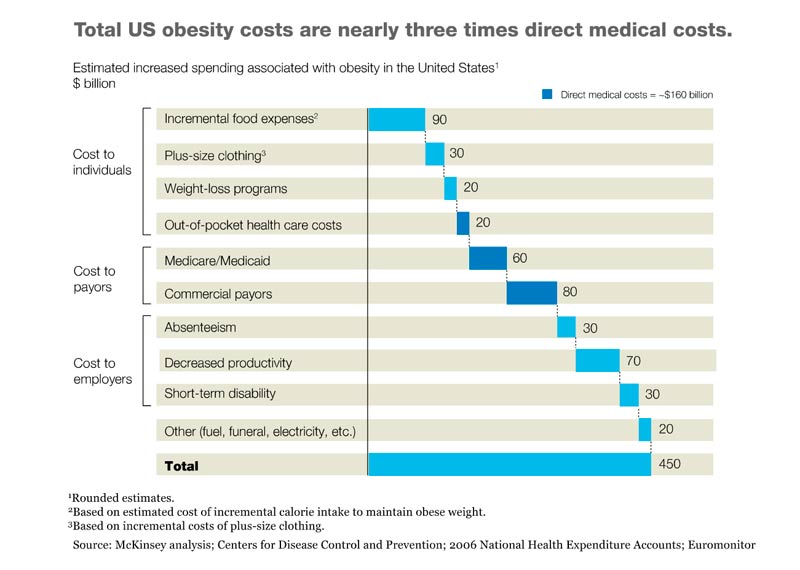 This report estimates obesity costs in the US. With total costs of $450billion, that is nearly three times the direct cost of $150billion.

Arguments against the tax on sugary drinks

Overall, I think a sugar tax is an excellent idea. It will raise revenue and make people think twice before drinking soft drinks which contribute to the problem of obesity. Demand may  be inelastic and it will not solve the problem on its own. But, the amount of deaths from obesity mean it is worth considering as many practical policies as possible. It is not by any means a panacea, there are many other factors causing obesity and poor health. But, it is worth taking these steps to help improve the nations health.