A carbon tax aims to make individuals and firms pay the full social cost of carbon pollution. In theory, the tax will reduce pollution and encourage more environmentally friendly alternatives. However, critics argue a tax on carbon will increase costs for business and reduce levels of investment and economic growth. The purpose of a carbon …

Readers Question: Is it possible to construct the economic system so that does not rely on expanded growth which as we all know, is damaging the environment? causing pollution e.t.c.

One of the great challenges of modern economics is to protect the environment. Part of the motivation is a simple moral case for being good guardians of the earth. But (fortunately for economics) there is a strong case of intrinsic self-interest. Protecting the environment nearly always makes good economic sense – as long as we look at issues in the long-term and not just from a short-term / selfish perspective.

The environmental costs of economic growth

Rapid economic growth combined with a rapid population growth has placed great stress on the environment. If we are not careful – damage to the environment will threaten future living standards. For example: 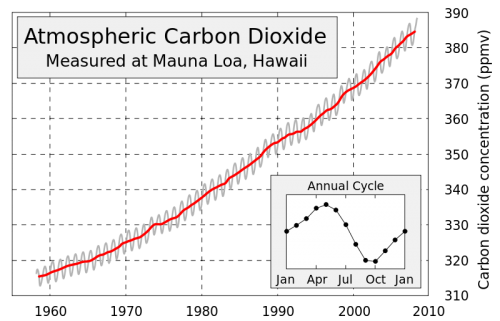 The past 50 years has seen a 60% increase in CO2 emissions – a product of economic growth.

The first essential aspect is for society and governments to recognise all the external costs and external benefits of the environment.

If we leave it to a free market, consumers and firms will ignore the external costs of their actions and we will get overconsumption, environmental costs – and a decline in economic welfare.

We need to put a monetary value on the cost of pollution / environmental damage and make sure that is reflected in the price people pay (e.g. tax on negative externalities). This will mean the cost of burning fossil fuels will increase – reducing demand. The biggest problem is making sure that we actually include all environmental costs in the price of goods and services we use.

For example, if burning fossil fuels is causing global warming and sea levels to rise. The effect could be devastating to future generations. In this situation, we are underestimating the external cost of this pollution. We are not paying the full social cost, and in the long-term we are failing to correctly price goods.

A difficulty is that we are used to pricing the cost of a good in terms of present value. Many environmental problems are cumulative and the costs are to future generations and people elsewhere in the world. Because we ignore these future costs, we are underestimating the potential social cost of current actions.

Another difficulty in calculating future costs is that we don’t know for certain. There is an element of uncertainty. This means we have to deal with probabilities. However, if we are dealing with the environment, there is a good case for being risk-averse and not gambling on the hope that global warming will be less damaging than some scientists predict. Reducing CO2 emissions can be done with only marginal cost to current consumers. But, damaging the environment in the long-term could lead to a devastating high cost to future consumers.

On the other hand, we need to encourage the production and consumption of technologies which don’t damage the environment.

To give a simplistic example – we could increase tax on petrol (which causes pollution). Then use this tax revenue to subsidise solar powered/electric cars which don’t pollute.

This will ensure that our society seeks to reduce the consumption of goods which are damaging to the environment. We can enjoy the same level of transport, but it will be supported by a different energy source which doesn’t damage the environment.

People often ask how economic growth can help the environment. Technology is the key. If we develop technology which creates a more efficient source of energy, but without pollution – this would enable higher output, and reduce pollution levels.

Limits of tax and subsidy

However, the use of tax and subsidy is not enough to deal with all environmental problems. For example, if we take the problem of deforestation of land in South America / Africa, a different response is needed.

For example, it may require governments to actually ban the process. It also requires a strong degree of international co-operation. Developing countries may feel a strong economic need to cut down forests or mine precious metals. However, it would be in the interest of the whole world to protect forests. Therefore, there may be a need for transfers to very poor countries in return for adopting less environmental damaging operations. Alternatively, it may just be a case of the need to educate about long-term sustainable practices.

As well as government action, there needs to be a change in consumer behaviour. A willingness to shift consumption patterns and be willing to pay higher prices and/or avoid consumption of certain products. e.g. only buy in season fruit, adopt a vegetarian diet. People want to protect the environment, but are we willing to pay an extra 10% increase in fuel bills?

Readers Question: Endangered rain forests, wild fish, elephants and more are examples of the tragedy of the commons. What would economists recommend to save, rain forests or fish stocks?

Firstly, the tragedy of the commons  is a situation where there is overconsumption of a particular product / service because rational individual decisions lead to an outcome that is damaging to the overall social welfare.

The problem with rain forests is that people may feel an economic incentive to chop down trees in order to make a business, e.g. farming, wood for furniture. On their own – a decision to cut down a few trees don’t seem to make much difference. If you buy a table made with wood from a rainforest it doesn’t make that much difference. But, if everyone takes these decisions, we end up with overconsumption and eventually this precious resource is lost.

Economic policies to save the Rainforest

1. Laws and regulations by governments to make areas of rainforest protected.

This is the simplest and easiest. The Brazilian government can simply disallow firms from cutting down more trees, and legally protect rain forests. The problem is that governments may not want to do this because they see it as  viable economic resource they need to make use of.

2. Global co-operation. If we ban cutting down rain forests, some countries may lose economically – Brazil, Indonesia e.t.c. But, the world will benefit from reduced global warming and the benefits of saving rain forests. In an ideal world, all major economies could make a financial contribution to countries who promise to save their rain forests. Therefore countries like Brazil and Indonesia don’t feel like they are losing out. All countries are paying a small amount to gain the bigger long-term benefit of saving the rain forests.

For more ideas, I looked at this page: 10 things you can do to save the rainforest

Primarily these rely on trying to change consumer behaviour. But, how could an economist make the changes more widespread and not optional?

1. “Palm oil, found in half of all processed foods in the US, is a key contributor to rainforest deforestation”

In this case we could tax palm oil which is taken from land which used to be rainforest. Increasing the price of Palm Oil, would discourage consumption and encourage consumers to buy other oils.

The problem is that individual taxes on palm oil will have administration costs. It may also be difficult to know whether Palm oil has come from former areas of rainforest. but, in theory a tax will reduce demand. The money raised could be used to buy rainforest land to protect it.

The other day, I had a quick glance at the newspaper headlines, whilst in a service station.

It seemed a paradox to have both headlines on the same day. At the very least, we could enable a small increase in tax on fossil fuels causing the problem.

In the summary of the UN document on global warming.

The chancellor has announced more freezes on fuel duty because it believes it will be politically popular. He is probably guessing that concern over the cost of petrol is greater than concern over the future of the planet.

Tragedy of the Commons

This situation could be classed as a classic example of the tragedy of the commons. People pursuing their self-interest but ignoring the common shared resources – leads to a loss in economic welfare. The problem is that with many individuals maximising their short-term welfare, there is a high cost to the future sustainability of the common resource.