1. Hedge against risk. Suppose an investment fund owned mortgage bonds from riskymortgage.co.uk. It might be worried about losing all its investment. Therefore, to hedge against the risk of default, they could purchase a credit default swap from Lloyds TSB. If riskymortgage.co.uk defaulted, they will lose their investment, but receive a pay-off from Lloyds to compensate. If they don’t default, they have paid a premium to Lloyds but have had security.

If a company’s financial position improves, the credit rating should also improve and therefore, the CDS spread should fall to reflect improved rating. This makes CDS more attractive to sell CDS protection. If the company position deteriorated, CDS protection would be more attractive to buy. Arbitrage could occur when dealers exploit any slowness of the market to respond to signals.

Readers Question: In finance and economics, there are such things as “bubbles” in the economy. And when bubbles start forming, it normally isn’t a good thing. My question is, how many different kinds of “bubbles” are there? Such as the property bubble or stock market bubble. And how do they form and what are their economic impacts?

Bubbles typically refer to a situation where assets or financial instruments see a rapid increase in price – an increase in price which is driven by speculative demand and are unsustainable in the long run. At a certain price, the bubble ‘bursts’ and prices come down to a level which more closely reflects the fundamental economic value. A bubble strongly implies that psychological factors such as irrational exuberance and over-confidence play a role in increasing the value of the asset. 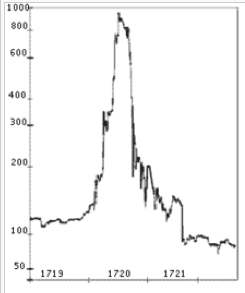 Between 2000 and 2006, house prices rose 80% and house price to earning ratios rose above long-term averages. This was partly fuelled by a growth in mortgage lending to subprime customers. When interest rates rose a modest amount in 2004/05, the housing market started to turn and prices fell 2006-12.

Readers Question: Who really is a global funds manager? A global funds manager is person who looks after different investment trusts / pension funds. He will decide where and how to invest the fund of money in different markets. Individuals with savings may wish to seek better returns than just saving in a bank with …

Readers Question Why did bond yields in the USA rise at news of the Fed Tapering back in August?

The Federal Reserve has been engaged in a policy of quantitative easing. This involves:

With the Federal Reserve buying bonds, other investors are also keener to buy bonds. The Fed is pushing up the price of bonds so whilst this is occurring other investors may be encouraged to also buy bonds and benefit from the rising prices.

Fed Tapering means that the Federal Reserve will begin to stop buying bonds, and no longer continue to create money and buy bonds. This tapering could also be seen as a preliminary to reversing quantitative easing and selling the bonds that have been accumulated.

A decision that the Fed would be beginning to end quantitative easing, will encourage investors to start selling bonds.

If the Fed stops buying bonds, the price is likely to stop rising; and if quantitative easing is reversed,  bond prices could fall. This expectation of falling bond prices will encourage investors to sell. Markets are always trying to anticipate future movements. Therefore, even a weak signal that bond purchases may start to be tapered was seen as a signal that now would be a good time to sell bonds and move into something else.

As bond prices fell, the yield started to rise (the inverse relationship again)

Securitisation can increase the liquidity of banks and enable banks to engage in more lending than previously.

Securitisation was a factor in the credit crunch because it enabled banks to lend more than usual. When there was a shortage of credit in the banking system, banks became over-exposed and faced a shortage of cash (liquidity)

The difference between loans and bonds.

Loans are viewed as assets on a banks balance sheet. Loans cannot generally be sold on or traded. Bonds can be traded and sold to other financial institutions.

What is involved in the process of securitisation?

A financial institution (often called Special Purpose Vehicle SPV) sells bonds to investors and uses the proceeds of these bond sales to buy the loans off the bank.

Why do banks want to pursue securitisation?

Banks have to keep a certain percentage of deposits in cash (liquid). This is to ensure the banks can repay savers who wish to withdraw their deposits at any moment from the bank. (If a bank couldn’t meet depositors demands for cash, it could cause a run on the banks and a loss of confidence.

Keeping a certain percentage of deposits in cash reduces profitability of a bank. Because a bank can’t lend this money gaining fees and a higher interest rate on the loan. Instead, they have to keep cash which earns nothing.

However, if a bank securitises its loans into bonds, the loans are no longer on its balance sheet (it could be described as off-balance sheet finance)

The bank has exchanged loans for cash. With this cash, it can now lend more, making more profitability.

The problem with securitisation

Securitisation enables banks to effectively lend a higher percentage of their deposits. This was fine when market conditions were good. However, there were two major problems.

In the US, customers began defaulting on mortgage repayments. Therefore, banks didn’t have income to pass onto SPVs and onto bondholders.

Previously secure mortgage bonds became worthless and so investors lost money. This led to a shortage of liquidity. No one wanted to lend. But, banks which had lent more than usual now faced real capital shortages. They couldn’t raise money by selling bonds to meet deposit requirements. This was a significant factor in the credit crunch.

Note: the primary cause of credit crunch was the large scale defaults on sub-prime mortgages. But, the process of securitisation meant that many banks and financial institutions lost money indirectly, and banks were much more exposed to these failed mortgage repayments.