Household saving is defined as income that is not consumed. Savings can be kept in cash form, saved in a bank account or saved in long-term assets, such as government bonds.

There are two ways of measuring saving levels

Rising income levels will lead to a rise in total saving levels. As households gain more disposable income and have the ability to save more. However, periods of economic growth can also create optimism and confidence amongst consumers and encourage a relatively higher percentage of consumption. When households expect rising incomes, then they are more likely to borrow to finance luxury goods and cut back on spending.

If we look at the UK household saving ratio, then it appears the saving ratio is cyclical.

In a period of rising asset prices, households may feel less necessity to save. For example, a rise in house prices leads to an increase in wealth, that homeowners can access through mortgage equity withdrawal. In the 1980s and early 2000s, there was a significant rise in house prices which increased the wealth of homeowners – this gives households more confidence to reduce saving levels.

Confidence and expectations of the future have a large bearing on saving. If households are optimistic about the future, they are more willing to borrow and run down savings. But, if confidence is low, then it is an incentive to save for unexpected problems. Factors that will influence economic confidence are closely related to the current economic climate, e.g. the rate of economic growth, unemployment levels, house prices.

Data from the EU shows a strong link between consumer confidence and saving ratios.

Life cycle theories of consumption argue that individuals try to smooth consumption over a lifetime. During a person’s student years, they will typically borrow (student loans), then in their 40s and 50s, with high income, they will save. Then during retirement, they will run down their savings. An ageing population can lead to a fall in the saving ratio.

However, there is no guarantee that retired people will run down savings. They may wish to pass savings on to their children or feel they will live a very long time.

In 2019, the savings ratio was very low due to falling real wages and pressure on households. But, all that changed with the Covid lockdowns of 2020. Unable to spend money on many usual activities, most households saw a surge in household savings. When the economy reopened in 2021, households spent strongly and released the pent-up savings and demand.

Inflation can have an effect on saving. If there is high inflation – and if inflation is higher than interest rates, then this will discourage saving. Households may look to either spend money before it falls in value or buy assets which hold their value during inflation.

Saving rates can vary between countries. It can reflect attitudes to borrowing, saving and social expectations. For example, thrift and saving can be seen as highly desirable in Germany – where there is a greater aversion to debt. The UK has a greater willingness to borrow and run down savings. 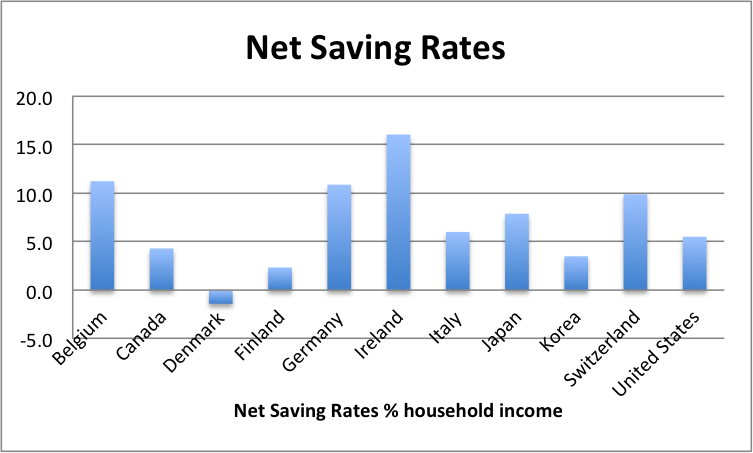 This shows a big divergence in saving rates between countries.