A look at how the housing market and changes in house prices affect the rest of the economy. In summary: 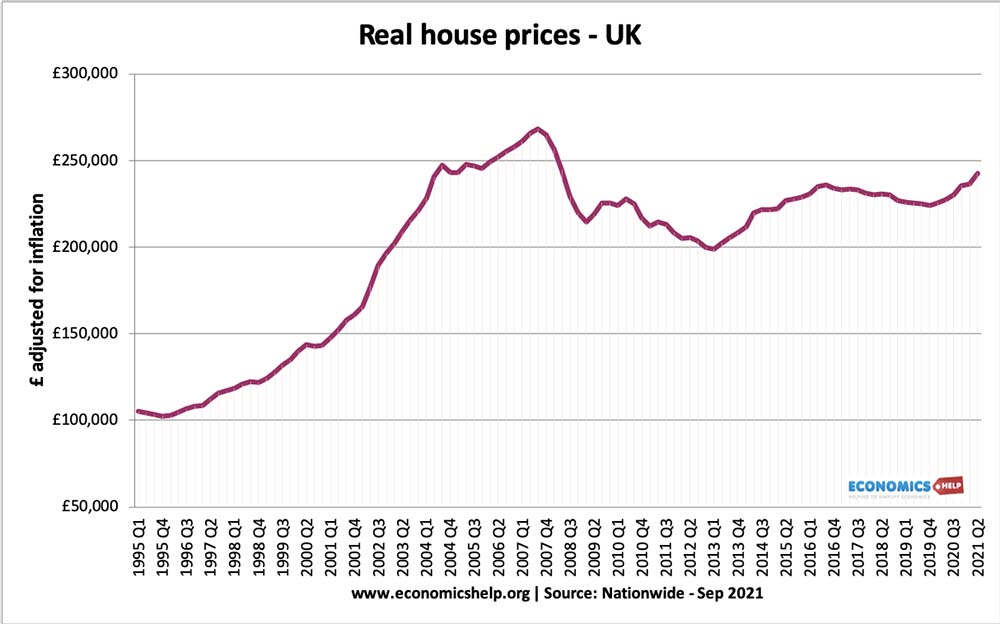 The wealth effect looks at the impact of the rising value of assets on consumer spending.

House prices can impact the lending practices of banks. When house prices are rising rapidly, banks see an improvement in the value of their assets. They feel more confident in increasing bank lending and reducing their reserve ratio. The long housing boom of 1995-2007, was one factor that encouraged bank lending to increase. Some former building societies like Northern Rock and Bradford & Bingley were so keen to lend; they were borrowing money on money markets to lend more mortgages. This bank lending proved unsustainable when the credit crunch hit.

Falling house prices tend to cause a fall in bank lending. Banks will see a decline in the value of their assets and may lose money, should homes become repossessed. This was particularly a problem in 1991 when falling house prices were combined with high-interest rates.

The construction sector is quite volatile and a period of falling house prices is likely to discourage investment and building of new homes. This decline in construction is another factor which will lead to lower economic growth.

Similarly, a fall in house prices is likely to lead to lower consumer spending and

How does a fall in house prices affect the economy? 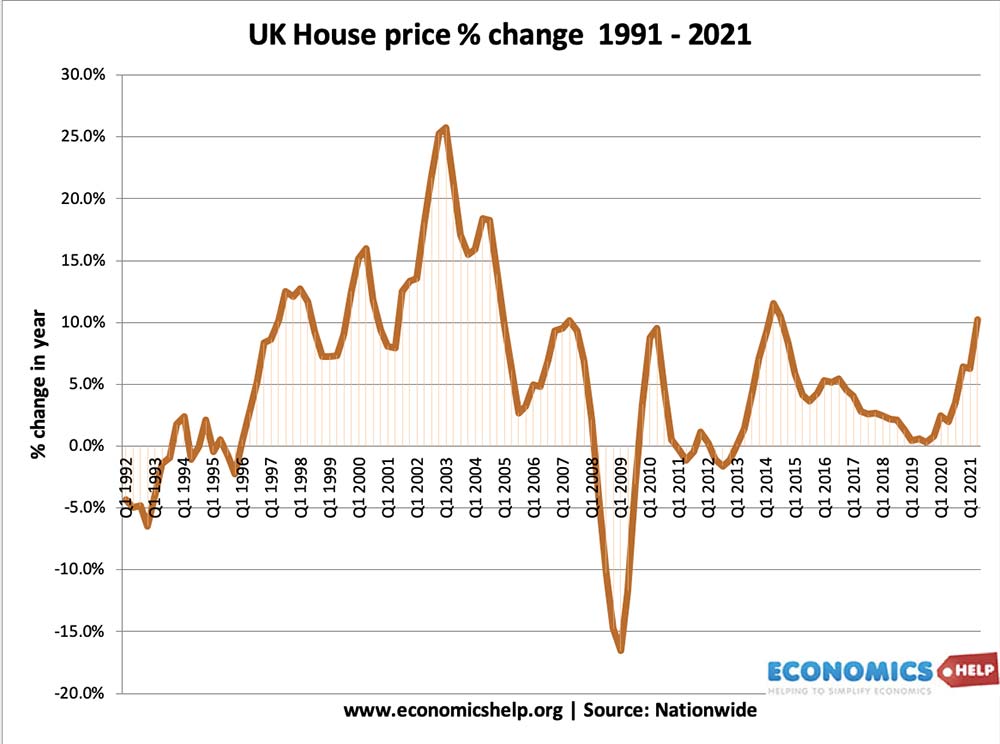 After the 1990 house price crash, there was a sharp fall in consumer spending, and this was a major cause of the recession of 1991-92. Falling house prices weren’t the only factor harming the economy (the economy also suffered from high-interest rates and high value of Sterling) But, falling house prices was an important contributing factor.

Falling house prices have an important psychological impact. A fall in house prices can pop a bubble of rising expectations.

If the economy is close to full capacity and already growing strongly, then a rise in consumer spending due to rising house prices could contribute to inflationary pressures. For example, in the late 1980s, the rise in UK house prices and consequent boom in spending was a key factor in causing inflation of 10% by 1989.

However, in the house price boom of 2000-2007, inflation remained relatively muted and close to the government’s inflation target.

The MPC is committed to keeping inflation within the government’s target of CPI 2% +/-1.

If the Monetary Policy Committee of the Bank of England felt rising house prices was causing inflation to go above the target, then they may decide to increase interest rates. For example, the late boom of the late 1980s saw rising interest rates to combat the inflation in the economy.

Evaluation of housing market on economy

Housing is the biggest component of most household’s wealth. Therefore it has a big impact on the economy. The UK has one of the highest rates of property ownership in the UK.  In 2006, it was roughly 77% compared to 50% in France.

However, in recent years, the % of first-time buyers owning a house has declined because it has been more difficult to get a mortgage. Home-ownership rates have declined to 66%, meaning the importance of the house prices is slightly reduced.

High house prices could cause some workers to be unable to afford to buy houses. High property values have caused a shortage of workers in London and the South East.

Wealth inequality in the UK

Housing market contributes to high levels of wealth inequality in the UK.

1 thought on “How the housing market affects the economy”