Given levels of UK national debt and forecasts for rises in government debt, what are the prospects for a UK debt default?

The problems of Greece and made markets more nervous about levels of government borrowing. It means markets are being more critical and careful about lending to governments. With one of the largest levels of current annual borrowing (over 11% of GDP) the UK is increasingly open to market scrutiny.

However, by being out of the Eurozone, the UK has more flexibility. It has the ability to allow currency to depreciate.  This provides a boost to growth. (though does make it less attractive for foreign purchasers of UK bonds. See the rate of UK foreign bond holdings). The UK also retains an independent monetary policy. The policy of Quantitative Easing staved off threat of deflation. It also led the Bank of England to holding government bonds equal to 14% of GDP.

The long term prospects for UK debt depends to a large extent on the rate of economic growth. Strong growth would ease the cyclical debt and make it easier to cut spending without causing double dip recession. However a prolonged period of stagnant growth and deflation which would definitely increased the debt burden, and suddenly the prospects for the UK would diminish.

It is possible to have a partial default through deflating the value of bonds through inflation. At the moment, inflation is above the government’s target. But, despite Quantitative easing, underlying inflation is still moderate. There are no signs of runaway inflation at the moment, given levels of spare capacity in economy.

However, a higher rate of inflation in the UK compared to Eurozone would make it more difficult to attract foreign investors to hold UK gilts.

The UK doesn’t have a history of debt default (despite much higher levels of Debt to GDP e.g. 200% in late 1940s). See: Historical levels of national debt

That doesn’t mean we could easily borrow 200% of GDP now – far from it. We were able to borrow so much in late 1940s because

The population of the UK is forecast to rise to close to 70 million in next decade due to immigration. This may cause housing shortages e.t.c, it may not be very popular. It may even be stopped by government legislation. However, Britain’s growing population does actually help government finances. It helps avoid an ageing population with increasing demands on government pensions and less income tax receipts. 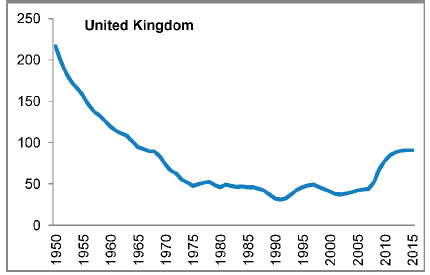 According to IMF, the forecast level of UK debt is to stabilise over the next few years. This is much lower than other countries such as Greece, the US and Japan

Will the UK default on debt?

At the moment, it is hard to see the UK defaulting on debt – unless there is another recession and a period of debt deflation. Hopefully, this prospect is unlikely (though not impossible). For a country in the Euro fiscal straight jacket (e.g. Spain and Greece) this is not so certain. One hopes that the ECB will promote a looser monetary policy to ease the fiscal tightening.

3 thoughts on “What is the likelihood of UK Debt Default?”