Example of why bond yield changes

The law of the bond market

What is the importance of bond yields?

That is an extra £41billion – just from higher bond yields. It is worth noting that if bond yields rise, it will take longer for the average bond yield to rise because government debt is issued on a rolling pattern. i.e. Government debt is financed by bonds sold over the past 30 years.

Why did bond yields surge in September 2022?

In the UK, Sept 2022, inflation was running at 10% and the economy at risk of recession. The government announced a huge fiscal expansion (involving tax cuts for high earners and an energy price guarantee) which saw the budget deficit soar.

The IFS believed the budget meant the UK debt was on an unsustainable path. Also the fiscal expansion alone was likely to raise inflation. Markets saw UK debt as riskier and investors sold on expectations of higher inflation, higher interest rates. See: Truss Economics – Will tax cuts save the UK economy?

Around 2010-12, in some Eurozone economies, bond yields rose very rapidly because of fears over government debt. The UK had very high annual borrowing (2011/12 annual deficit – nearly 10% of GDP). Yet in the UK , bond yields have fell. This was because:

History of UK bonds since 1984

This shows the bond yield on 10-year government bonds since 1993.

Higher bond yields in the early 1990s were a reflection of higher inflation rates. Investors needed a higher yield to compensate for inflation eroding the value of savings. As inflation and interest rates fell in the 1990s and 2000s, so did bond yields.

The bond market is often quite quiet and not much happening, but sometimes the bond market can destabilise a government and force it to change its policy.

Examples of when the Bond market changed government policy

The austerity of 2011. After the great financial crisis of 2008/09, European economies went into recession. Budget deficits rose and investors started to see southern European bonds as risky. In the Euro (at that time) the ECB was unwilling to intervene and provide liquidity for individual countries. Therefore, bond yields surged in countries like Greece, Spain, Ireland and Portugal. As a result, there was pressure on these countries to reduce government spending, and reduce budget deficits to (partly appease the bond market) This led to a deeper recession. The crisis ended in 2012 when new ECB chief Mario Draghi promised to buy bonds and ‘do whatever it takes.

The fear of the bond market was one rationale for UK austerity under Cameron and Osborne. Other economists argue the fear was misplaced because in a time of low inflation, markets were quite relaxed about government borrowing.

UK mini-budget of September 2022. As well as an energy price guarantee, the government introduced £45 billion of unfunded tax cuts at a time of high inflation. Markets were spooked because the rise in debt was very large and they had no confidence it was sustainable in the long-term. (more detail here). It led to a sell-off of gilts (bonds), and rising interest rates and the government were forced to u-turn on cutting the 45p tax rate and more pressure to cut spending. The Bank of England also intervened buying £65bn worth of gilts.

Carter / Reagan. In 1976, long-term bond yields were 8%. By the end of Carter’s administration, they had risen to 12% – meaning their value fell by a third.  Markets blamed Carter on failure to reduce government spending and inflation. High-interest rates and inflation were a factor in Carter losing the 1980 election. It lay a framework for the philosophy of cutting government spending. Though Reagan increased the budget deficit by tax cuts and higher military spending. NY Times “What the bond market wants from President Reagan” 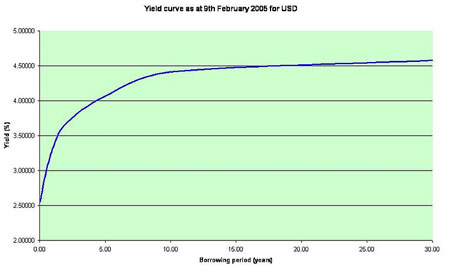 These show the interest rates for bonds of different maturities. Usually, bond yields on short-term debt (1 year or less) are low. Bond yields on longer-term debt (20,30 years) are higher. This is to reflect increased risk and likelihood of inflation in the long-term.