Definition: The money supply measures the total amount of money in the economy at a particular time. It includes actual notes and coins and also any deposits which can be quickly converted into cash. There are different measures of the money supply.

According to the Monetarist theory of inflation, there is a direct link between the money supply (M) and the inflation rate.

Milton Friedman was an important advocate of monetarist theory, pointing out many situations where government decisions to increase the money supply led to inflation. For example

“Inflation is always and everywhere a monetary phenomenon in the sense that it is and can be produced only by a more rapid increase in the quantity of money than in output.

Friedman (1970) The Counter-Revolution in Monetary Theory.

Link between money supply and inflation in practice

Still, M4 money supply growth can give a guide to underlying inflation and economic activity. For example, in 2011, 2012, the UK experienced cost-push inflation. But, the Bank of England didn’t increase interest rates, they felt the economy was still weak. Later CPI inflation fell, and in late 2014 is 1.5% – below the government’s target.

A resurgence in M4 will be a key factor in ending quantitative easing and increasing interest rates.

M4 is a key statistic because it can illustrate the underlying strength of economic activity. When the economy went into recession, we see a sharp fall in M4 growth from 15% a year to negative growth in mid-2008.

The negative M4 growth during 2011 and 2012 was a sign that economic activity was falling and unsurprisingly the economy went into a double-dip recession.

The past governor of the Bank of England, Mervyn King has said that M4 remains an important variable for influencing monetary policy. Negative M4 growth is a key factor in the justification for more quantitative easing, keeping interest rates low and attempts to bolster bank lending.

Quantitative easing involves the creation of electronic money by the Bank of England to purchase gilts from the financial sector. In theory, this should increase the money supply. 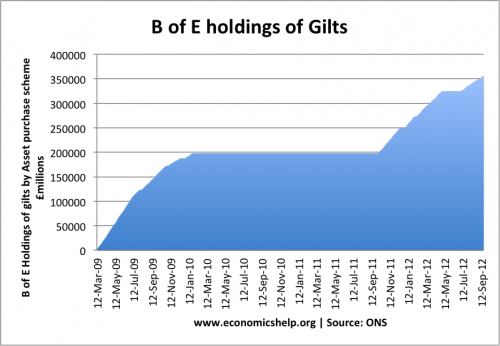 At the start of quantitative easing, M.King said:

Therefore, without quantitative easing, we may have seen a bigger fall in the money supply and a deeper recession.

However, the relatively weak money supply growth figures also suggest that quantitative easing was limited in its ability to stimulate bank lending and get money to the real economy.

Inflation has often been above target during this period of negative broad money supply growth.

Why can inflation be high and yet money supply growth negative?

Why is broad money supply growth negative – despite economic recovery?

UK economic growth has been positive since 2013, yet the broad money supply growth has not matched the economic recovery.

I’m not entirely sure why this is. But, it reflects the fact bank lending is still weak. Also, level of savings is not increasing as people spend their disposable income. It suggests the economic recovery may still be quite tentative. 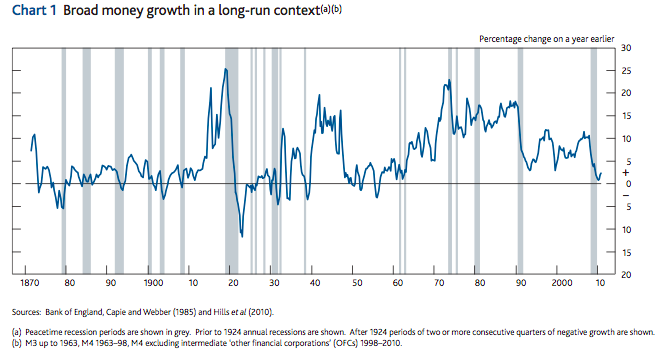 This is a ‘narrow’ definition of money, it includes just notes and coins in circulation

Narrow money growth has been less affected by the recession and has remained constant. However, M0 is a relatively small percentage of the total money supply.