One of the most popular topics on this blog is government debt. UK National debt and list of countries sovereign debt.

To many people the sums involved are so large, there seems something instinctively wrong, even dangerous, about allowing the government to borrow so much. As Mrs Thatcher said, she was brought up a grocer’s daughter and she learnt how to balance the books.  Why should the government be any different? Also, if a government has so much debt, is there not a cost to the future generation?

There are more points to be made, and some of the below are incomplete. This blog is more of a starting point for further discussion. For example, if you’re in the Eurozone and don’t have a Central Bank, government debt takes on a different complexion.

Firstly, there is the mortgage analogy. Most people could never afford to buy a house, so they get into large debt and take out a mortgage. This may take them 30 years plus to pay back.  In the case of your mortgage, your debt to income level could be 400%. Yet, despite the high ratio of debt to income, most people don’t feel it is irresponsible. Mrs Thatcher the grocer’s daughter might have wanted to balance the books, but she wouldn’t have felt bad about borrowing to expand her business.

You could argue that there is a big difference between a mortgage and government borrowing. With a mortgage, the debt is secured by an asset – the value of your house. The government borrow for welfare payment, national health care e.t.c. With government spending, it is harder to see the assets which act as collateral for the borrowing. Governments can have substantial assets. Though after years of privatisation, the UK’s assets have shrunk considerably. To underline the importance of assets, some studies have shown that the sustainability of government debt is related to the level of assets. Governments with more assets are generally in a better position to borrow more.

2. Debt Interest Payments as % of GDP.

When I took out a mortgage, my monthly mortgage payments were over 45% of my disposable income. Yet, I didn’t feel on the verge of bankruptcy. Although it was a big chunk of my monthly payments, I could afford the cost of servicing the debt. Over the past few years, rising nominal incomes have slowly eroded the % of my income that goes on mortgage payments.

When it comes to national debt, the cost of servicing the debt is important. But, in the UK, debt interest payments of a % of GDP, are relatively low 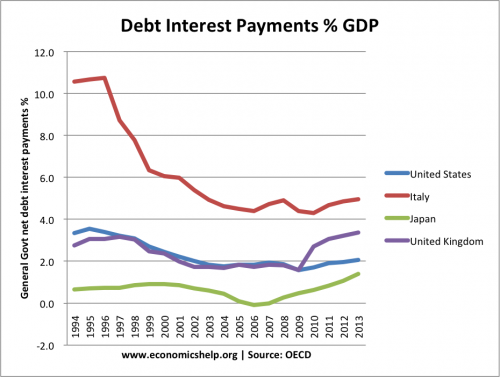 The cost of servicing debt is an important guide to its sustainability.

When people ask about the national debt, the first question people ask, is who do we borrow from? It can be a little unexpected when the answer is – we mostly borrow from ourself. 70% of government debt is bought by the UK private sector. In Japan, the level of domestic debt holdings is closer to 95%. government debt could be seen as transferring resources from one part of the economy to the other. (who lends the government money) The private sector has surplus saving so this ends up with the government, who can then spend.

4. Crowding out or Employing unemployed resources?

If you have falling private demand, rising saving ratio, and falling government spending – there will be an even more substantial fall in aggregate demand, making the recession more serious. This is why the Greek, Portuguese and Spanish economies are experiencing a deep recession. There is a fall in private sector spending and fall in government spending at the same time.

In a recession, government debt is a way of employing under-employed resources. Therefore, it can overcome wasted capacity, and help the economy to recover. If a recession ends earlier, if unemployment is reduced, there is a significant benefit for the economy.

5. Government debt as a way of providing safe assets

Another way of thinking about government debt is to see it as a way of providing safe assets. The private sector has failed to provide safe assets, there is great demand for government bonds. Therefore, in theory, the government could increase borrowing, sell more bonds, and keep the cash in reserve in the central bank. The BIS, claim, this helps the free market by providing these safe assets. There is more to this issue than I can deal with at this point. But, it shows that government debt can be seen in a very different light to usual. (you can see more at when governments become banks)

Governments don’t really pay back debt. They just roll it over. Economic growth can reduce the % of debt to GDP, making previous borrowings increasingly less significant. The UK has debt exceeding 100% of GDP in 81 of the last 170 years, there has never been a crunch time when it suddenly all had to be paid back.

Government debt enabled the UK to survive two world wars. In 1945, with public sector debt over 170% of GDP, the new Labour government invested in a national health service, the welfare state and nationalised key industries. Public sector debt continued to rise, but over the next few decades there was sustained economic growth which allowed the debt to GDP burden to fall.