Readers Question: National debt is now extremely high. However aren’t there different kinds of debt e.g that which funds current spending, that which funds investment in infrastructure and emergency (bank bail out etc) Surely it’s the first we should really be worried about and less concerned with borrowing that makes the economy more efficient such as infrastructure 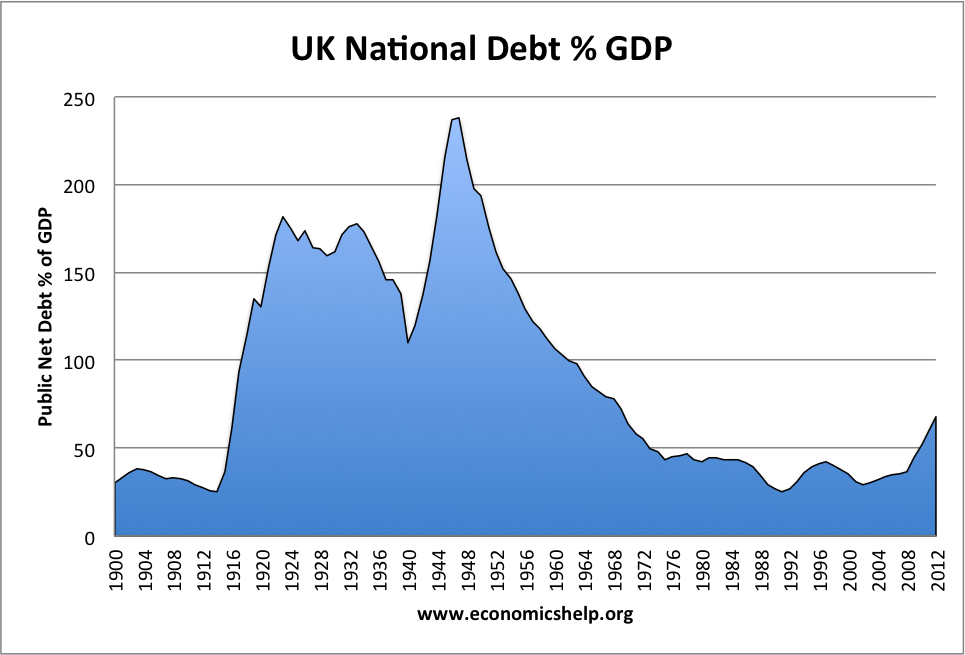 But, is national debt extremely high? In one sense, a public sector debt of £1,193.4 billion  is very high. But, if we compare national debt as a % of GDP (which is most meaningful comparison) over the past 100 years, it is significantly lower than between the 1920s and the 1970s. The increase in national debt we have seen in the past few years, is partly a reflection of the recession and rise in cyclical borrowing. In a recession GDP falls, but tax revenue also falls and government spending increases. If the private sector cut back on spending in a recession, it is helpful to the economy for government borrowing to rise temporarily.

2. aren’t there different kinds of debt

Within the government spending levels, there are different sections, including:

During the period 2010-12, public sector investment was cut: 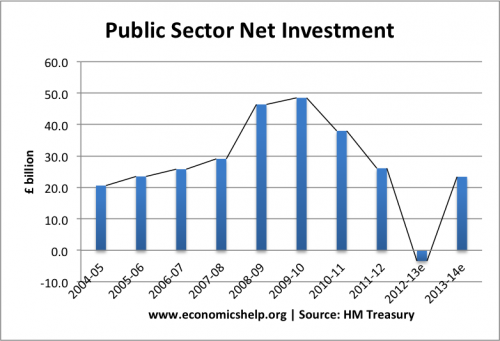 Firstly, whatever type of spending you cut, the impact on aggregate demand should be similar.

However, in a deep recession, in a liquidity trap (e.g. 2008-2012) this didn’t occur. The private sector were reluctant to invest. It depends when you cut government spending.

If you cut public sector investment, then in the long term, there is likely to be lower economic growth. This is because the economy will increasingly experience supply constraints, such as road congestion due to lack of investment. Therefore, cutting public sector investment can be seen as a short-sighted policy because you reduce aggregate demand, but also restrict the growth of productive capacity. Cutting welfare benefits haver fewer supply side effects. Some economists may argue cutting welfare payments could actually boost productivity because it encourages people to go to work. However, cutting welfare benefits could increase inequality and doesn’t necessarily boost productivity; it could even damage worker morale.

3 thoughts on “Are there different types of government borrowing?”