The UK economy has experienced the most prolonged decline in real GDP on record. GDP is still lower than before the start of the great recession in 2008. This unprecedented recession has been prolonged – despite a sharp depreciation in the Pound, and a raft of unconventional monetary policies. However, recent statistics suggest there are some reasons to be more hopeful and the UK economy is starting to recover. Yet, despite the recovery, many analysts still worry that the economy is unbalanced and could be vulnerable to a further economic downturn in Europe and the rest of the world.

The UK recovery since 2009 is best described as ‘patchy’ The important thing is to maintain recovery for a prolonged period and not slip back down into recession. The governor of the Bank of England recently talked about the need for the UK economy to reach ‘escape velocity’ – this means a recovery strong enough for the recovery to be self-maintaining – without the artificial props of quantitative easing e.t.c.

Where is the recovery coming from?

1. Retail spending. Although real incomes remain depressed, retail spending has shown renewed strength. Compared with a year ago (July 2013 compared with July 2012) the quantity bought in the retail industry increased by 3.0% (ONS). Consumer spending accounts for approx 65% of UK GDP and so is the most important component. A rise in consumer spending is good because it shows a renewed confidence about the economy. However, at the same time, it raises concerns. The growth in consumer spending is partly financed by a fall in the savings ratio, it isn’t being met by growth in real incomes. Therefore, there is a danger the UK recovery is falling into the old trap of being unbalanced and relying on consumers dipping deeper into their pockets (and credit cards)

2. Manufacturing. For a long time, manufacturing has been the struggling sector of the UK economy. The weakness of manufacturing is one factor behind the UK’s persistent trade deficit, but recent evidence is more promising. This week, the  PMI survey for the manufacturing sector found the strongest growth in activity for two and a half years, with output and new orders rising at their fastest rate for 19 years. However, although this sounds impressive, it needs to be remembered manufacturing output is still 11% lower than it pre- 2008 peak.

– a long way to recovery.

Construction has also seen growth in the first part of 2013, but, this is from a very weak base, and construction output is still down 0.5% on a year ago. (ONS)

In one sense, these export growth to new markets is encouraging. With Europe stuck in recession, it is good news the UK exporting sector has been able to diversify into emerging markets, which perhaps have greater potential in the long term. However, there have been increasing concerns that the long boom years for China and India may be coming to an end. This would dampen growth in these new export sectors. Also, it is still a small share of GDP for the UK economy.

4. Housing Market. Another staple of the UK economy. A renewed rise in house prices is a mixed blessing. The rise in prices will encourage consumer confidence and improve the balance sheets of banks. It has also encouraged renewed activity in the construction sector. However, house prices are already stretched, with house price to income ratios close to all-time high. Rising house prices as the main source of economic recovery is another sign of an unbalanced economy. 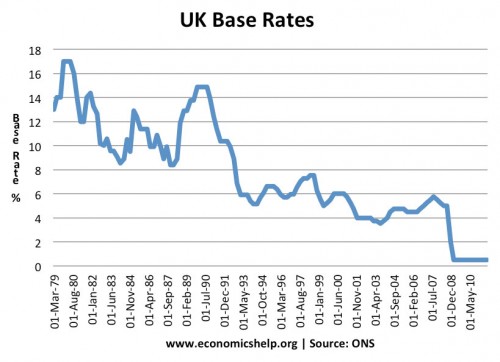 Read moreIf the UK had been in the Euro – how would it affect the economy?

This week I wrote a post about escape velocity – the idea an economy stuck in recession needs a decisive burst to escape a liquidity trap, low spending and low confidence. If an economy can return to this normal trend rate of economic growth, we can end the period of ultra low interest rates and engage in fiscal consolidation without harming economic growth. Unfortunately, when you’re in a liquidity trap to achieve this escape velocity requires a certain decisiveness, political courage plus understanding of basic macroeconomic theory.

Unsurprisingly, this year’s budget gives not so much a decisive burst, as more an attempt to use a few plastic bands to try and patch up a leaking ship.

In the past five years, the UK economy has shrunk 3% – making the recession longer lasting than even the 1930s. The past three years have seen stagnant economic growth, with no sign of falling unemployment or rising living standards. What the past three years have shown is that in a liquidity trap (interest rates or 0%) tight fiscal policy is contractionary –  no matter how much you try to engage in unconventional monetary policy. The chancellor is still hoping that the Bank of England can work miracles, whilst he reduces government spending. The evidence of the past three years is not encouraging.

Yet, despite clear evidence of the damage done by premature fiscal tightening, the chancellor ploughs on with his plan A – seeming to spend most of his time blaming what a mess we are in. In Europe, EU policy makers have, in the past, attempted to appeal to the confidence fairies. The idea that cutting the budget deficit will restore confidence in the economy and lead to a miraculous economic recovery. The current government also tried to go along with this. The only problem is that it miserably back-fired – with confidence slumping after the 2010 election. The confidence trick of austerity has become one of the great jokes of the past few years – except it’s a joke without much humour.

Read morePatching up the economy with elastic bands

Readers Question: to what extent did the EU recession cause the UK recession?

In economics often several factors occur at the same time, and it is difficult to give a weighting to the importance of each factor. To some extent, people will emphasise the factors which best suits their outlook / beliefs. 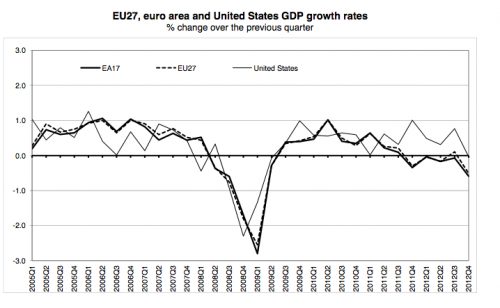 In theory, the European recession of 2012, will effect the UK economy in the following ways:

But, how important a factor is the European recession?

1. Exports to Europe have not fallen significantly 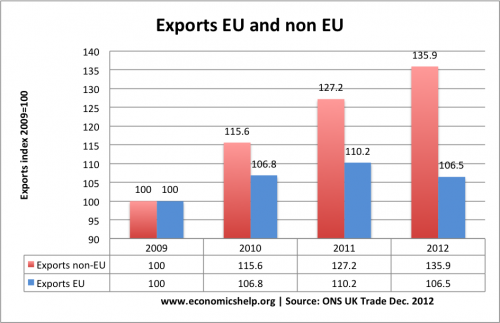 Read moreTo what extent did EU recession cause UK recession?

In the past five years, the UK has experienced an unprecedented period of stagnant economic growth. The fall in real GDP is longer than even the great depression.  Given the unusually depressed nature of the economy, what policies could the UK pursue to boost economic growth and recovery? Here are eight possible policies with their pros and cons.

With low borrowing costs, the government should be increasing spending on public sector investment projects to provide an injection into the economy and help get unused resources active. Traditionally spending on infrastructure has a large multiplier effect (knock on benefits to related industries) so there could be a significant boost to economic growth from higher public sector investment.

Furthermore, government spending on public sector investment projects can help reduce business costs and boost productive capacity. This doesn’t necessarily have to be high profile projects like HS2, there are many smaller projects which can give a good rate of return (e.g. potholes in roads, need for more rail carriages e.t.c)

If the government announced a series of new investment projects it will also help improve consumer and business confidence. This would be better than concentrating on the need for austerity and ‘things will get worse’. High profile investment projects would create a greater sense of dynamism and hope. By contrast, the recent austerity measures caused a fall in consumer confidence.

Despite low interest rates, bank lending in the UK has been very low since the credit crunch. Banks are seeking to improve their balance sheets and many firms struggle to gain finance for even moderate expansion plans. In the absence of normal commercial bank lending. A public investment bank could make greater lending facilities available to small and medium term firms. The UK is the only G8 country not to have a public investment institute. (see: case for public investment bank) 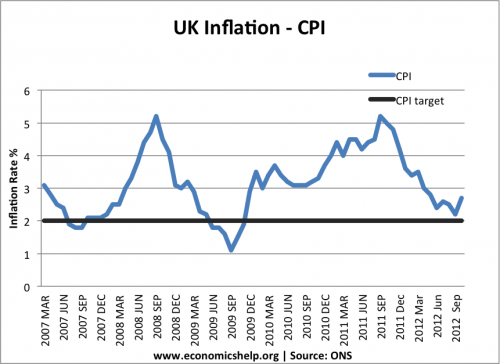 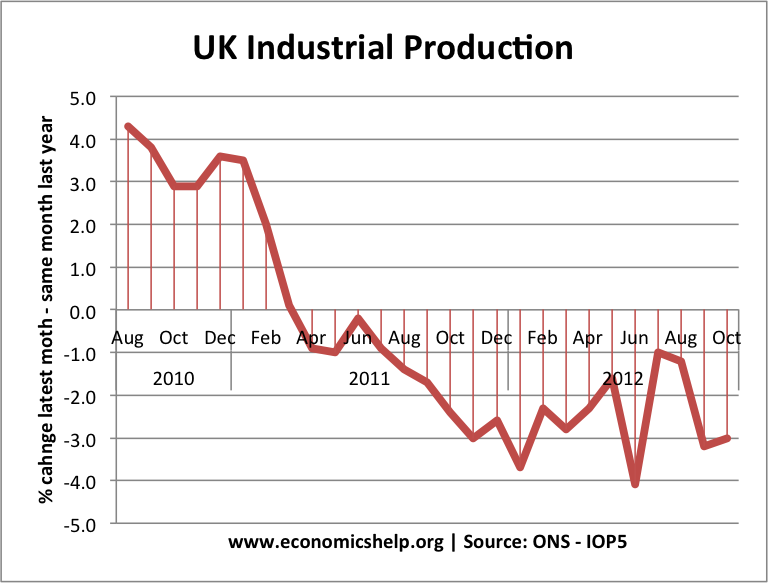 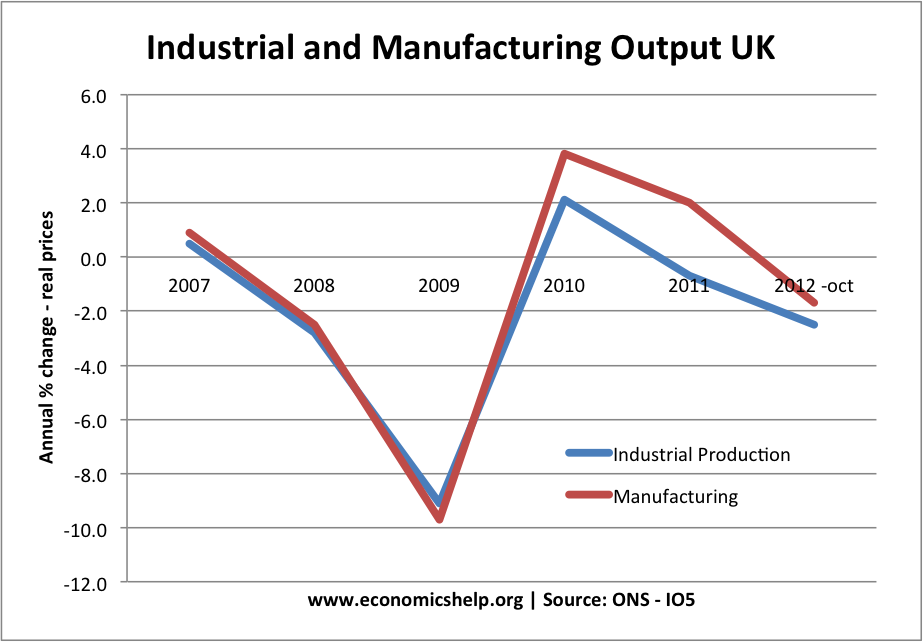 By any standards, 2012 has been a dismal year for the UK economy. Despite a temporary Olympic bounce, GDP remains below 2008 levels, and the Bank of England is as pessimistic as it’s ever been. Unemployment might be lower than other European economies, but with 1 million underemployed – official statistics perhaps mask the wasted resources in the economy.

The Chancellor has a lot of bad news to contend with.

In his defence, you might point to the Eurocrisis and say it is inevitable the UK economy was harmed by the slowdown across the channel.. But, despite the recession in the Eurozone (which have problems relating to single currency), it is hard to avoid the fact that two and half years into the job, he has to take responsibility for the direction of the economy.

Essentially, Osborne started the job with great fanfare about reducing the deficit. Deficit reduction was sold as the most important objective – the implication was that without immediate cuts, the UK could end up like Greece or Italy.

But, unfortunately, the experience of the past two and half years is that fiscal consolidation during a recession tends to be counter-productive (austerity will increase deficit). Freezing public sector spending, whilst the private sector is still very fragile, has led to a large negative multiplier effect. It is hard to avoid the conclusion that the double dip recession is largely the fault of economic policy.