Politicians are often keen on making targets to eliminate budget deficits by a certain year. There is a strong political motivation to be seen as strong and committed to reducing government debt. Politicians who are vague about the debt are often heavily criticised and it is seen as poor politics. An advantage of budget deficit targets is that it ensure politicians have a stronger commitment to make politically difficult choices – raising taxes or cutting spending.

However, from an economic perspective targets for reducing budget deficits are not always as helpful as they may seem.

There can be many sound economic reasons for reducing government borrowing. Just because a government can borrow, doesn’t mean it is desirable to.

Problems of a budget deficit target

Another few graphs to look at the impact of the UK budget deficit on bond yields and interest payments. Government net borrowing for 2012-12 excluding Royal Mail pension fund transfer and Asset Finance Programme (AFP – the proceeds from Q.E) Government borrowing vs debt interest payments The very large deficits have had  little impact on …

Generally, government debt is shown as a % of real GDP because this is best reflection of a countries ability to repay.

However, this wouldn’t completely reflect the ability to repay the debt. For example, if Switzerland had a high level of debt to tax, it is in a better position to increase tax rates to raise more revenue if necessary. France by contrast already has high tax rates, and when France tries to increases tax rates it may create disincentives (like famous movie stars moving to Russia).

Also, you could argue that a lower tax country like Switzerland will encourage more private enterprise and a stronger economy. If a country was strangled by high taxes. It would see it’s debt to tax ratio fall, but the economy may weaken.

However, although it is best to measure government debt as a % of GDP, it is still useful to examine debt as a proportion of government tax take. For example, some developing economies struggle to raise tax revenue. A large proportion of GDP may be beyond the government. If the government can only collect 10% of GDP in tax revenue, this limits their ability to repay even modest levels of debt. It is definitely worth taking into account.

Read moreDebt as % of Tax Revenue 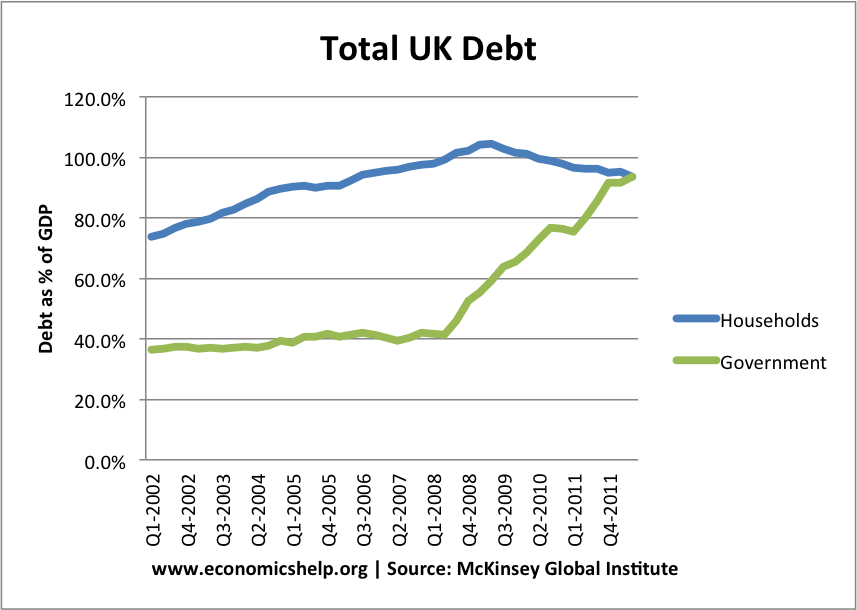 Since 2008, there has been a fall in household debt as a % of GDP – as households cut back debt levels. (note GDP also fell in this period) 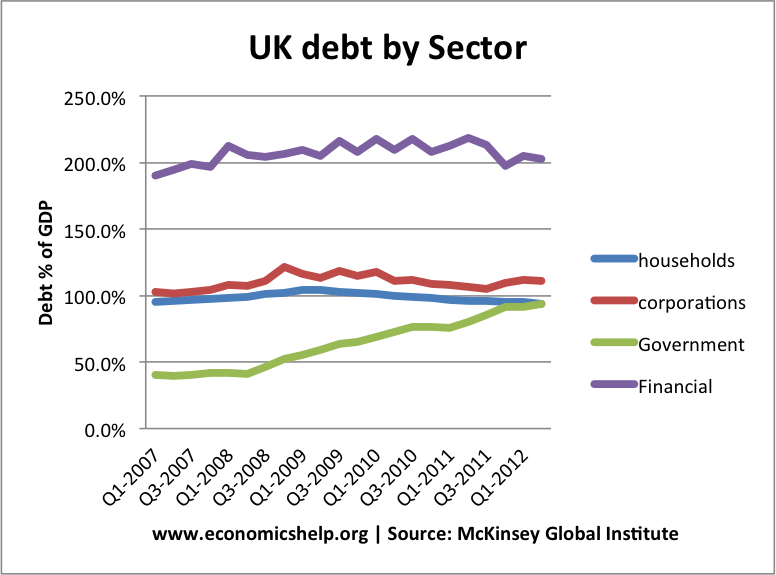 Financial sector debt has stayed constant at 200% of GDP.

Compare experience of US – where total debt fell in period 2009-12. 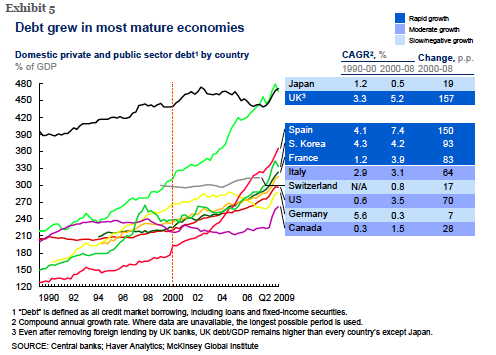 The UK has seen the biggest rise in total UK debt in past 20 years. Only Japan is slightly higher.

Readers Question: Hello! I was just wondering in the midst of the European crisis when all economically strong countries have been downgraded? Many countries in the Eurozone have seen a downgrading in their credit rating for Government debt. The economic crisis saw a sharp rise in levels of government debt to GDP. In a recession, … 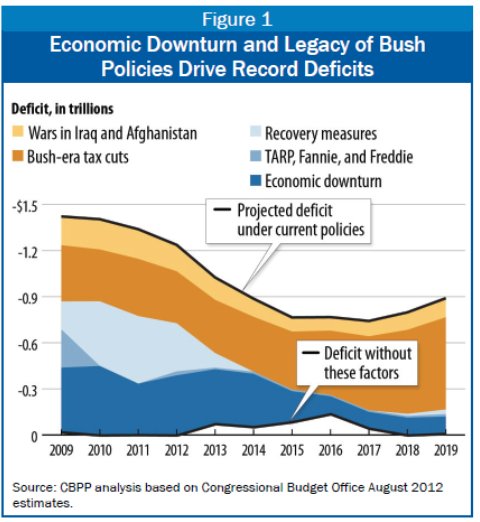 Read moreCauses of US Budget Deficit 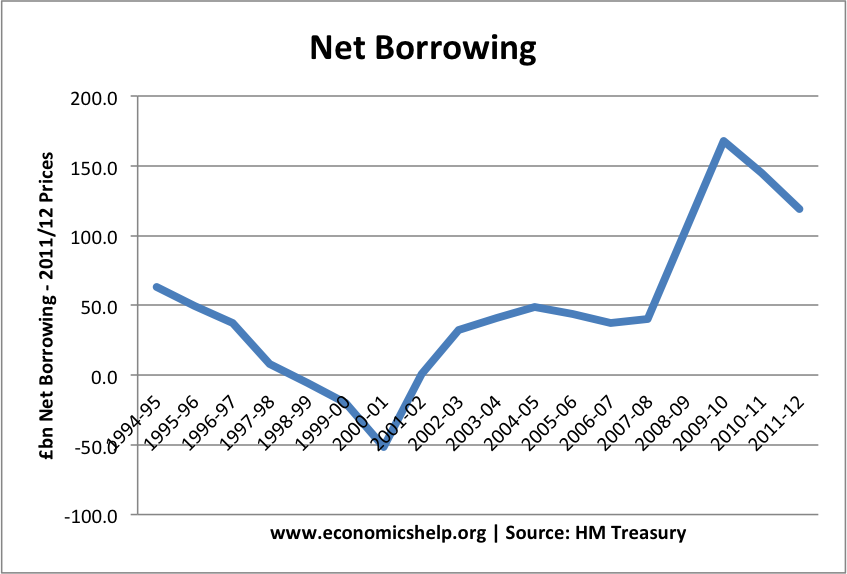 The government is correct to say that the budget deficit (Annual borrowing) has fallen by 25% since the peak of 2009-10. 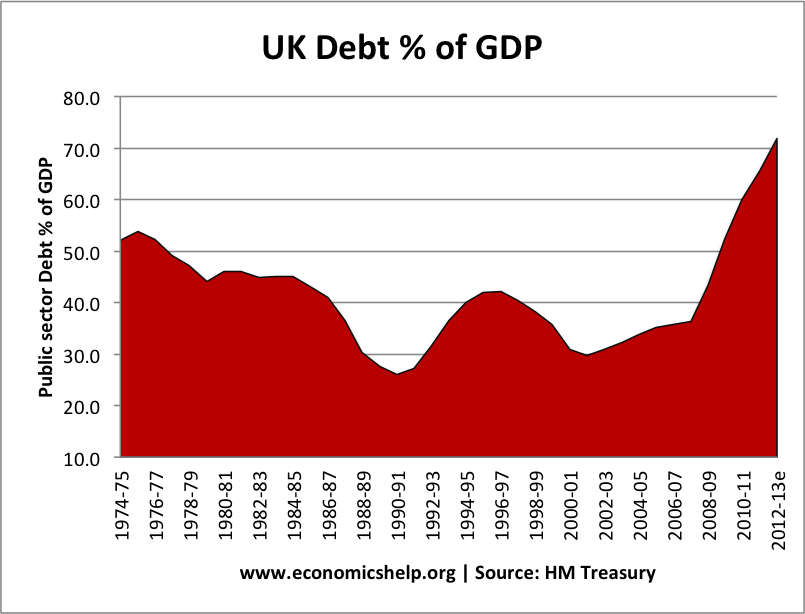 This means the national debt (total amount government owe) has increased at a slower rate than it might have done. But, it is still increasing rapidly.

Read moreHave the Government misled the public on UK debt?